Today was supposed to be 71° and partly cloudy, but the sun never came out, and the temperature didn’t climb past 60°. We were clipping right along though when there was an accident on the Piler next to ours.  A dump truck flipped over on it’s side and crushed the conveyor belt, spilling beets everywhere.  Thankfully no one was seriously hurt (one woman was hit by a flying beet), but it was both a major distraction and significantly added to our workload as that piler was shut down all day.  Let me say this does happen.  It is not common, but definitely something we heard about in our orientations.   We were told very seriously to never walk between a truck and the piler when they are unloading.  I will be honest though, in the past I broke that rule on occasion in my hurry to clean up beets, but never, ever again.   On the plus side I saw was the team that was on the piler was immediately taken into a safety meeting and debriefed.  That is exactly what is supposed to happen and since I coincidentally was getting coffee on my break and was in the same location as them, I can say it was handled very well.  The team was encouraged to discuss what happened and the tone of the bosses was very very good.  They were just gathering information and not laying blame of any kind, which again is a good thing.  And although they did not call a meeting with the larger group, Bill,  my favorite foreman, came up to me personally, made sure I had seen the accident, and reinforced the importance of not getting near the trucks when they were dumping. They take it very seriously and now so do I.  Here are the pictures.  I think they speak for themselves. 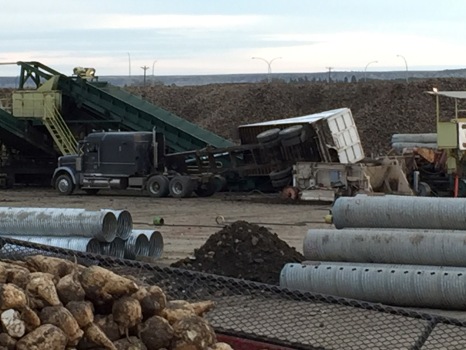 This was one of the “fifth wheel style trailers” that is very long and has a arm that pushes it up.  It is the least common type of trailer, but we do see several of these on our piler every day.

Inside edge.  As you can see they the trailer landed on the belt and bent it, and the beets completely filled the gap between the truck and the belt. If someone was standing there, and the trailer didn’t hit them they would be buried by very heavy beets. Scary

This is the huge hitch pin on the truck. Completely sheared off. Thanks Marvin for sharing these pics with us

So the piler was shut down all day because they had to have a crane come and lift the trailer off the piler.  No clue if it will be fixed tomorrow, but it’s doubtful.   As I said that put a lot of extra pressure on us and to complicate things our piler was down 3 times today for at least 1/2 hour or more.  We had muddy screens, and bolts needed tightening, and once it was down over an hour.  The line of trucks was backed all the way to the road for the first time since we have been working here and it’s not a great feeling.  I will say though that because the results of the accident were staring us all in the face everyone was super careful, truck drivers, us, supervisors, everyone.  And everyone was very understanding of the delays.We still processed 172 trucks, but we left a line for the second shift that was pretty long. 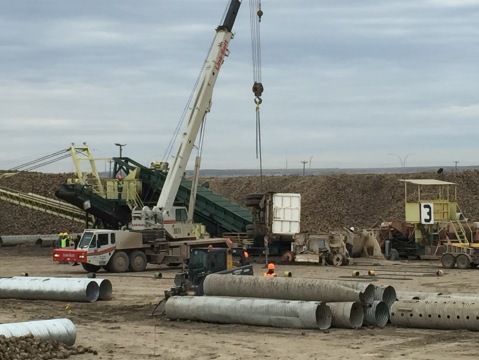 After it was cleared (about 3pm) the crew had to hand clear most of the beets around the conveyor. That would have sucked.

I woke up after a very restless night, with some anxiety.  Seeing the pictures again and writing about it really brought home the seriousness of what happened yesterday.  The weather was good, but the wind did kick up near the end of the day and we got our first dust.  They issued us dust masks in orientation, but it’s been so muddy it’s been a non issue.  Not today.  The trucks were kicking up dust and I understand why they said they would have water trucks watering the ground at one point.  I’m pretty tired so I am just going to mention a few catch up things.

First off I found out that only Piler 2 and 3 have ventilation teams. That’s because our beets will be taken to the factory last.  Lee thinks they picked us because they thought we could handle the extra distraction and maybe that’s so, but I could live without it!  Again, the guys working on ventilation are fantastic, but there is so much going on in such a small space, it can be nerve wracking.  (Side note: I found out later that it’s only for a few more days and I am so happy. I thought it would be until the end of our working but apparently they only have to do it to part of the pile.)

They brought dinner in for us tonight, which was really nice.  The local Assembly of God church. Anything I don’t have to cook is great, but this was prepared by a local church and really good.  We gotten into some rivalry with our friends on Piler 6 about who has the best Piler. (Spoiler alert: it’s us. – Lee)  Apparently their truckers told them they were the best, which absolutely can’t be true because our truckers have been giving us candy and making us cookies! (Also, we’re the best. Our pile is a work of art, and we’re much farther down the field than they are. These are the facts in evidence, they are not in dispute. – Lee)

Finally, I wanted to talk about Bill for a minute. He is my absolute favorite foreman, not just because he is very competent and attentive, but because he is the kind of guy who will stop and help pick up beets if he is walking by.   Lots of people wouldn’t do that, and he certainly didn’t have to, but he had just finished some maintenance on our piler the other day right when I got a spill and he immediately stopped to help me.  Bill is a really good guy.

OK, that’s all I have in me today.  Lee just went to bed at 7:25pm and I will be following shortly.  There is a cumulative effect on these long days.  Oh, and they told us today the harvest is 45% complete.  Surprising with so many days off, but good to hear we are making progress. (Everyone pretty much agrees that this amazing progress is due in large part to our truly astounding efforts, and in spite of whatever the hell they’re doing down at 6. It’s hard to tell from so far down the field, but it looks like a clambake, or some kindly of a hootenanny. – Lee) 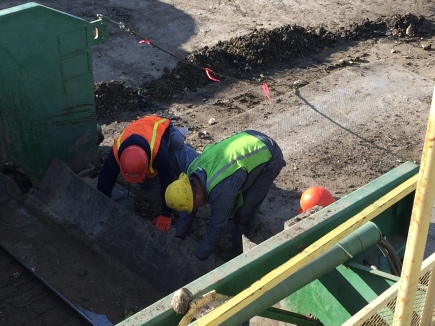 Bill, in the yellow hat, helping me pick up beets