As many of you know I am an efficiency expert by trade.  I spent my career helping make processes better and this is exactly the kind of place I would love to apply those skills.  You’ve got good people, with a complicated process, and lots of variation, and that variation is what has me itching to help.  One of my favorite parts of my job was changing something simple which had a huge impact on the people doing the work, but here, because of my role as a helper, that’s tough.  I am just another person in the crowd without the mandate to help make change.  I can’t stop myself though from thinking about things and to be honest it kind of makes me sad.  So when an opportunity arose to make one little change I just had to try to fix it, but it all happened in a convoluted way.

One of the major problems on the ground here is getting the attention of a Bobcat operator when there is a spill.  Yes, we can clean them up ourselves, but it takes time, the trucks have to wait, and it takes a physical toll on the operator. (Each beet is slick with dirt and mud, they’re irregularly shaped, and large and heavy enough that you can really only pick one up at a time.) It’s not the Bobcat operator’s fault.  They are in a small cage and don’t always see when help is needed.  So over the course of a couple of days, we started brainstorming ideas on how to make this better.  Those conversations took place on the yard, and in the grocery store where several of us met up in the Deli department.  Thankfully one of the skid steer operators is a guy named Russell.  He is a solo full timer, 33, and has a wonderful work ethic.  He wanted to fix the problem also, and had gone to the foremen.  They weren’t allowed to spend any money though so the obvious solutions like walkie talkies were out.  (Walkie talkies also just don’t work well here in general, because of the noise). Each piler does have an air horn to “toot” to get the attention of a bobcat or a supervisor, but often you hear them and because of the distance and noise can’t tell which piler it came from. As a group though we had this idea about creating flags people could wave, and Russell went and scrounged stuff from the maintenance area and made every piler an orange flag stapled to a dowel rod.  Awesome!!  Problem solved (or at least much improved) and now we all have a flag to wave when we need help.  It was a small thing, but really made me feel great, because I helped facilitate it. (Just waving the flag turned out to not work so well, because, again, it’s a very large area, and it’s unlikely anyone is going to see your flag randomly waving from a few hundred yards away. But tooting the horn gets everyone to look around, and then they see it. It works perfectly. – Lee) 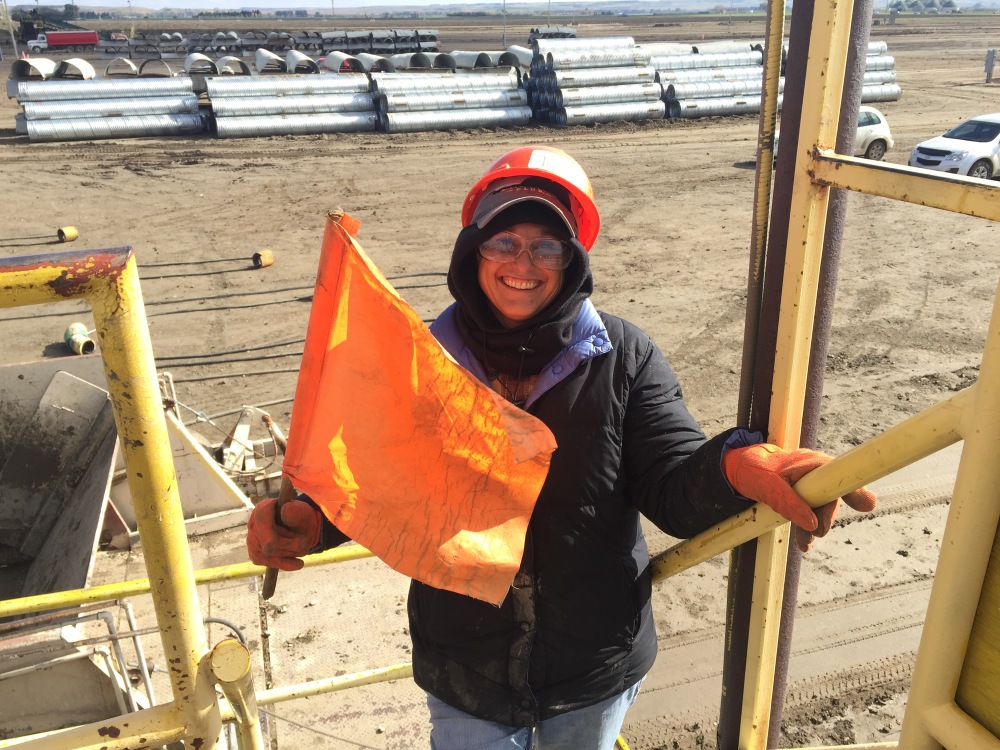 It’s a fine line helping out in these situations, because the foremen get bombarded with people older than them who think they can solve all their problems.  My approach has always been to watch and learn the process first before throwing out potential solutions.  Otherwise the good ideas get drowned out in the “noise” of ideas that have been tried and dismissed for whatever reason in the past.  Now that we have had a little success, maybe there will be more opportunities in the future to help, but still it’s not the same as really stepping back, seeing the whole picture and going from there.  I miss that.

Ah well.  It’s 43° today and a full 12 hour day of work.  I am SORE and off to work.  It was 43 when we got there and the weather just got better as the day went on.  I kept taking layers off until around 3pm I was in just a Tshirt.  Doing this work on nice days is soooo much more pleasant.  We were jamming today also, processing 236 truck loads in 12 hours.  (This count is not 100% accurate, because I counted large trucks as 2, and regular trucks as 1. Tomorrow I will do an accurate count.) They actually had to shut us down twice so they could clean our rollers because we were pushing so may beets through.  We all enjoyed the extra breaks when they came.  Our communication was great and I really enjoyed both the work and the people I was doing it with.  Around that 11th hour though…wow it gets tough.  We all slow down a little and it’s a study in perseverance to get through that last hour.  In response to the soreness I am now taking 6 advil a day instead of the 4 earlier in the week and the two hot showers a day are helping immensely.  My feet though are starting to cause me real trouble.  When the mud dried up, walking got easier, but the ground got harder and since it’s not totally even I had some unsteady moments.  Maria switched to her hiking boots mid-day and I think I am going to need to do that as well.  I hate to put that kind of wear on my Merrill’s, but my feet definitely need a break from the rubber boots.

I had a very restless night last night, probably because I watched the second presidential debate before going to bed which was upsetting for a variety of reasons.  Anyway, I rolled over at 1:30am and groaned so loudly I woke Lee up, which hardly ever happens because he is such a sound sleeper.  I have deep tissue aches everywhere.  Seriously, from my feet to my hairline. the hardhat rubs there. At 4am we got up and walked outside to 41 degrees but a strong, cold wind.  Wow.  Not what you want to feel on aching muscles. Thankfully there are no serious sharp pains as of yet, so it’s Advil, hot shower, and heating pad on the mid shoulders which seems to be the worst of it. Why did we decide to do this again?  Alright time to woman up, and get moving. I did decide to wear my Merrill’ Hiking Boots and wow was that a great call.  My feet felt so much better at the end of the day.

It was cold today and the work was complicated by the ventilation pipes they are adding.  They started yesterday and a crew is adding these metal pipes which later in the winter they use to blow air through to keep the piles from getting too warm. It’s organic material, and it wants to decompose, so keeping the the piles cold stops that process. The group doing it is very conscientious, but there is a lot going on.  We have trucks coming through and them moving pipes in the same smallish area.  It requires heightened vigilance and although I understand the necessity, I am not a fan.  Still that’s the way it will be from now on, so I might as well get used to it.  We are still jamming trucks through though.  We did 107 standard dump trucks and 88 double length trucks for a total of 195.  That’s roughly dumping a truck every 3.7 minutes.  We felt we were doing well, but today that was validated by the Agriculturist Kathryn.  She came to our piler, gave us all a huge Snickers bar, and told us that the driver’s feedback was that we were the fastest and most efficient piler.  That felt really great, since we are all very new and there are some crews that have been together for a long time.  It was just really nice to be told good job, even in a small way.

And really all the supervisors are great.  I have worked for many people in my life and been treated so much worse by people who had little cause.  These folks are working extremely long days in difficult weather conditions and are always pleasant, helpful, and supportive.  I don’t think that is the same at every yard, so I am super glad we ended up at Sugar Valley.  Oh, and I had a conversation with one of the supervisors today and was told that “stay pay” (four hours for days we are called off due to weather) is a Sidney Sugar perk, but is not universal.  Personally, I don’t know if I would do this without the stay pay, so that is definitely a question I would ask before accepting one of these positions.

The best part of my day though wasn’t the Snickers bar, or the work, it was Marie telling me about Icy Hot Roll On

.  I had no idea such a product existed and man, was it great.  Late in the day I knelt down to pick up a beet and felt a pull in my back thigh/butt muscle.  When I mentioned it, she offered her roll on Icy Hot and suggested I go into the porta john and put it on.  I asked if she was fine with me using her product on my ass, but she just laughed.  Now that’s a nice person!  It started working instantly and that really helped get me through the end of the day.  It did, however, cause some serious pain when I jumped in the shower.  I had forgotten how showers and Icy Hot don’t mix.  Anyway, we stopped on the way home and I am using it in several locations with great success.  Between suggesting hiking boots and the Icy Hot, I am dubbing Marie the queen of the great ideas!!

I’m going to leave you with some pictures of the ventilation process.  I am sorry if these posts are a little disjointed, but we have so little free time I am squeezing it in when I can/ I hope the flavor of the experience is getting through. 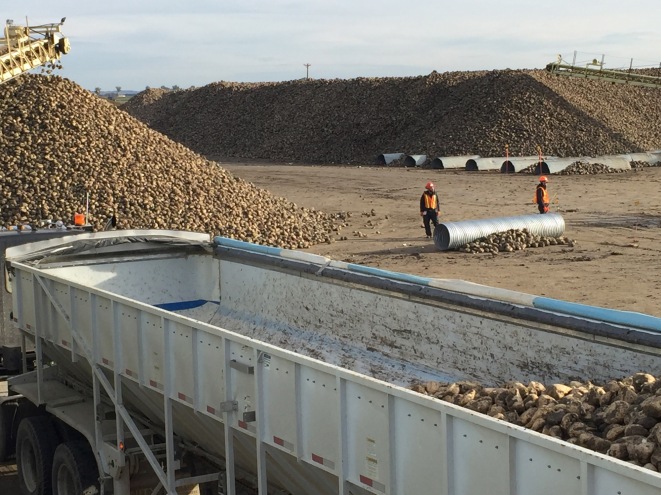 The team working with the pipes, pretty close to trucks 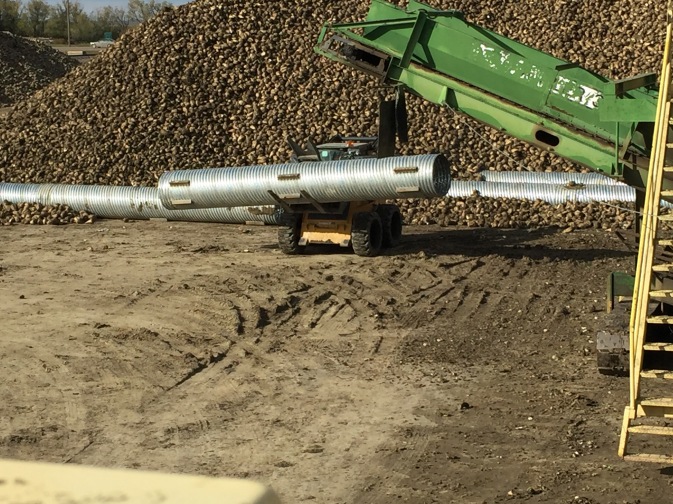 The pipes are carried by a bobcat and placed very carefully 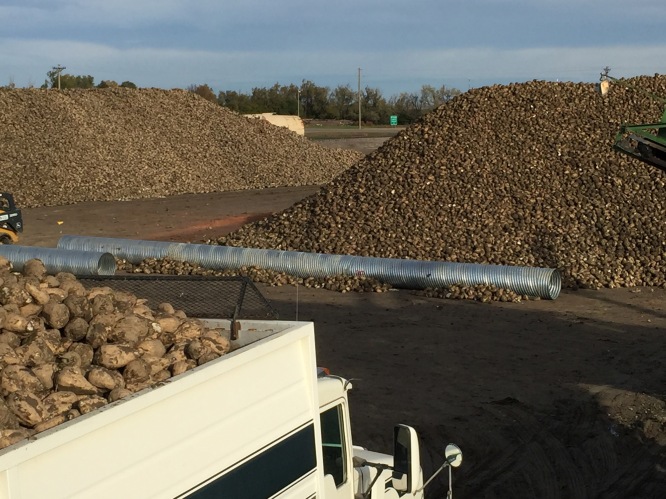 They lay them slightly in front of our pile, then another row, and another 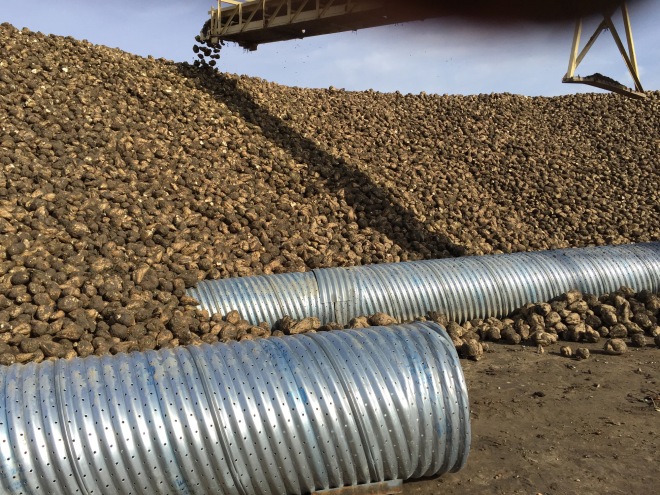 Then as we pile more beets they are covered. so they have to be close to the pile, but still leave room for trucks to pull out