After driving through more farm land we stopped at one more RV Park near Saskatoon called Campland RV Resort. It was a very big park, and looked brand spanking new, with level, uniform sites and very nice owners.  But once again the WiFi didn’t work at the sites, and I think both of us had had enough.  We got up early and drove 300 miles so that we could make it back to the US the next afternoon.  Once again I drove through customs, and again, it was a pretty pleasant experience.  I really have to recommend the wives drive through customs, because the agents seem friendlier when a woman is behind the wheel.  We crossed at Regway and there wasn’t another car in sight, and the questions were simple.  The only thing that kind of threw me was whether I had any garden vegetables from Canada.  I said No and no to buying alcohol in Canada, no to weapons, and off we went. I told them I was glad to be back in the land of the internet and they laughed.  We even got a welcome home from them which was nice. After about 20 minutes we got internet signal and once we switched drivers I starting texting and calling people.  My phone was “blowing up” as the kids say, and I was loving it.

There aren’t many places to stay this far north in Montana and many of those are campgrounds that cater to the Bakken oil field workers. Since that business is a little off, some did have openings for a couple of nights and we ended up going to Williston, ND and staying at Fox Run RV Park.  As a side note, these parks don’t show up in the standard Good Sam, All Stays and other campground finder apps, but Lee had done some research and found four of them in this area.  Originally we wanted to get to the campground in Sidney early, but were told by the coordinators we couldn’t come in early even if we paid for the extra night ourselves, so Lee emailed 4 campgrounds and heard back from two of them.  Coordinating this with scant wifi was tough, but Fox Run seemed to understand and welcomed us in.  I didn’t know what to expect, but it’s actually pretty nice.  The campground itself is a huge gravel field on top of a very high gill, and near the highway, but they have a huge common area in the main building including two large screen TV’s surrounded by lots of comfy couches, a couple of take-a-book-leave-a-book libraries , and the nicest laundry room I have ever seen in a campground.  Plus, all the sites have heated water spigots and it’s clear these “camps”, for lack of a better word, are designed for folks to live here year round. My only complaint is the Wifi at the sites didn’t work at all, but since we were in the land of the 4 bars we were fine using our own data, since we haven’t used any at all this month.

OK, so I know I am making a huge deal about internet/cell phone/text and you are probably thinking what’s the big deal, it was only 8 days, but it really was a big deal.  My oldest daughter got engaged while we were in Alaska and is making wedding plans, and was looking for some advice.  And you never really appreciate how much you whip out your phone to look something up until you can’t do it. On top of that, everything is fine if you stick with the travel plan you made, but try to deviate from that at all and it’s tough to make good decisions with limited information resources.  So simply put, I like Canada, the people are nice, and it’s mostly beautiful, but I am not a fan of the lack of internet.  Or more specifically, affordable cell based internet. Not that I won’t go back, I really want to spend more time in the Canadian Rockies, but I would be very hesitant to go without some sort of affordable phone/internet solution.

Plus, it’s not cheap.  I kept track of our gas/campground costs for the Canadian portion of the trip specifically, and wanted to share them.  Please keep in mind all costs are adjusted to American dollars at a 1.2 exchange rate, which was essentially a 20% discount on anything we bought.  The current exchange rate might be different, but this is what it was when we bought Canadian dollars for the trip back in May. All campgrounds are Good Sam parks, and all diesel was purchased when we were at half a tank, regardless of cost, not that there was much variation in price on the Alaskan Highway.  Once we hit Dawson’s Creek we used Pilot exclusively because we get an additional 2 cents off per liter.  We also started with a full tank from Tok and ended with 1/4 tank once we crossed the border.  Could you save money by boondocking or staying at Provincial Parks that have no services? Yes.  Could you save gas money by having an extra tank and buying more in the big cities? I guess, but really I think this is a fair summation for most people who aren’t willing to go to extraordinary lengths.  Just so you know, we drove 250-300 miles per day and were on the road 6-7 hours per day, which was a nice pace, although cumulatively was a little tough by the end of the eighth day. I think these numbers are average enough for most people to use as a starting point for the “How much will it cost to get to Alaska?” conversation, just make sure you adjust costs up or down based on the current exchange rate. 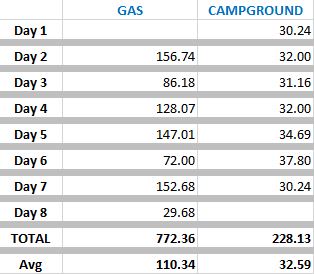 The big news from this data is it cost $110.34 per day for gas in Canada. I knew it cost a lot, but since you are often stopping twice in one day for gas it doesn’t seem that bad at the time.  We were mostly getting 8-10 mpg and were driving below the speed limit in all cases.  Gas is just expensive in Canada, and it’s a long haul from Alaska to the US.  The good news for us is that we got paid a couple more times in September and that will help defer the cost.

So how did we do overall financially this summer?  Well, unfortunately I didn’t do nearly as good a job segregating costs in the beginning as I did in the end.  Plus we had income from some work in May, work through the summer, and a generous gift check my grandfather sent me, which I am including since I splurged on some entertainment items with it that I wouldn’t have spent money on otherwise. I also included all our major monthly expenses for both May and September, to be fair.  So these figures are  rough, but sufficient for me personally to have an idea about how we did, which really is what this is all about. (Sorry Bill, I promise to do better next time!).  Originally,  I thought the Alaska summer could cost as much as $5K and had the money set aside to cover it if necessary.  That’s a big reason we signed up for the beet harvest, to defray those hypothetical extra costs, and dig us out of any hole we had put ourselves into.  It turned out that we did much better than that, and for the May to mid-September time frame also better than I originally thought we would.  In a five month period we spent roughly $21,000 and made roughly $18,000.  So we only spent around $3K  for our entire summer in Alaska and that was mostly due to the costs incurred (and lost revenue) while traveling to and from the state.  Considering all the bucket list items we checked I would say that was a huge bargain. but I am really, really glad that we worked this summer and very grateful to Marc for compensating us so fairly.  On a side note, if you are interested in the budget of someone who traveled Alaska without working this summer, I recommend checking out Jim and Barb’s Alaska Adventure Recap.

So the beet harvest will put us back on solid ground and selling Christmas trees will put us back in the plus column.  We haven’t wiped out our savings  cushion yet, and since we have been doing this for almost two years now I am pretty proud of that. Oh, and about the beet harvest.  Working this job is a pretty big deal for both of us as we have never done anything like this before.  I know lots of people consider doing the harvest, so we are going to change-up what the blog looks like for the next several weeks.  We are going to write posts in a “daily diary” format and then post them when there is enough content to be worth the read.  This could be daily, weekly, or something in between.  I just don’t know.  I am committed to writing something everyday in this format and have asked Lee to do it as well.  I think having a second perspective will be extremely valuable and he has promised to try.  That being said, I am not going to force it.  I am sure we will be both be extremely tired and stretched physically and emotionally and the last thing I want is to argue about this blog on top of all that.  But I have explained how important this is to me and he gets that.  So the new format will start on Monday.  Today I am soaking up the internet, watching some football on TV, giving the house a good deep clean, and hopefully getting a haircut.  I am thrilled to just be sitting for a day, it really feels luxurious and is well needed before we start the next week.