After the marathon day Saturday, we were both pretty tired, but I was still feeling a little restless.  Lee had to edit all day, so I decided to take the truck and explore a little on my own.  We had seen some trumpeter swans about half an hour away but the timing wasn’t right for a pic, so I headed out that way.  I also wanted to take the road to Lake Louise which several locals had talked to me about and I had heard there were animal sightings.  So off I went with my tunes cranked up (when you are sharing one vehicle getting to blast your music is a treat) and came to the lake.  Didn’t see the swans at all.  Total bummer, so I turned around and headed down the road to Lake Louise.  Less than three miles in I had a fantastic surprise.  On an ill kept turn out I saw arguably my most beautiful glacier sighting to date.  I didn’t even know there was a glacier here, or what glacier it was (after much internet research and finally a call to the Forest Service I determined it was Tazlina Glacier) and really, just, wow.

There were no signs and no clearing so I had to park and walk quite a ways back to get this shot. What made this glacier so special was the huge glacier lake at the end of it. 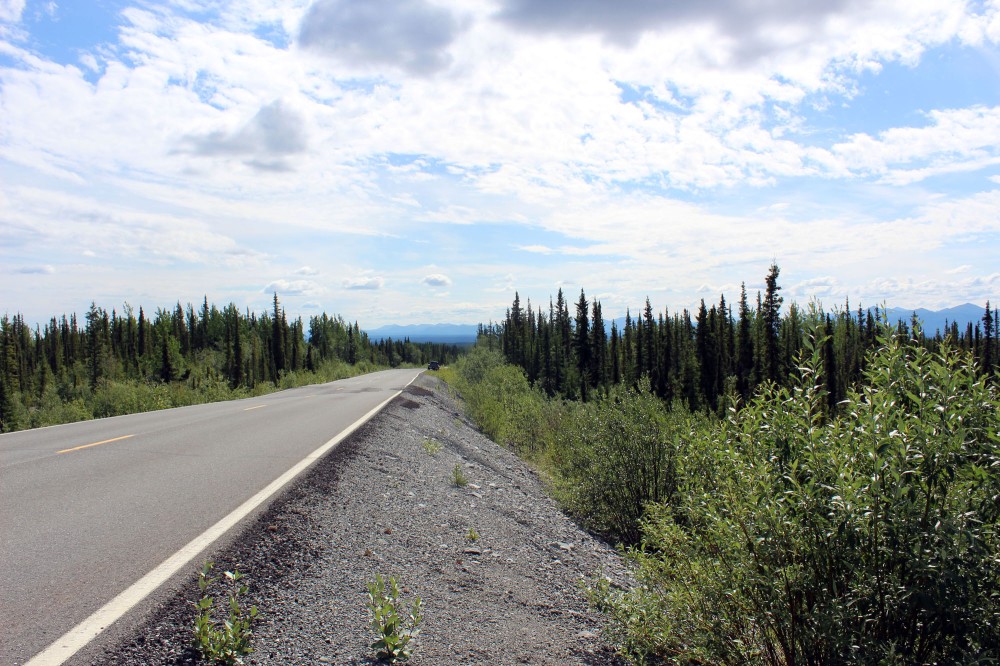 I couldn’t put the truck on the steep edge that had a break in the trees. 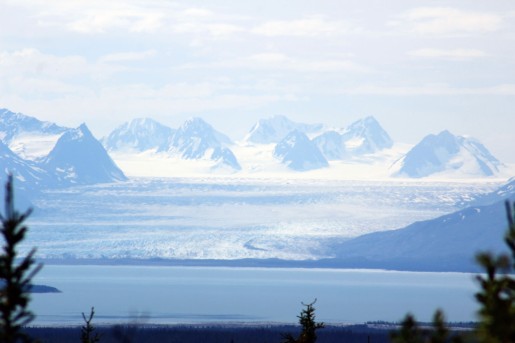 Despite missing the swans I was very excited about this view and surprised no one had ever mentioned it.  Feeling good, I kept going down the road.  Ok, so the Lake Louise road has to be the worst one I have been on yet.  It is well paved and marked, but has so many frost heaves it looks like ribbon taffy.  Unlike a road that is completely torn up, you want to go too fast on this road, and if you are not super careful you end up bottoming out.  Thus the 22 mile road took me about 45 minutes to traverse.

The road to Lake Louise.  These “ditches” were worse than they looked

There are lots and lots of little lakes on the road and active signs of fishing, but no animal sightings unfortunately.  It was pretty heavily traveled for a side road on a Sunday morning, but after a couple of nasty jolts I stuck with a slower speed and let folks go around me if they wanted.  The small lakes were pretty though, and they were all slightly different. 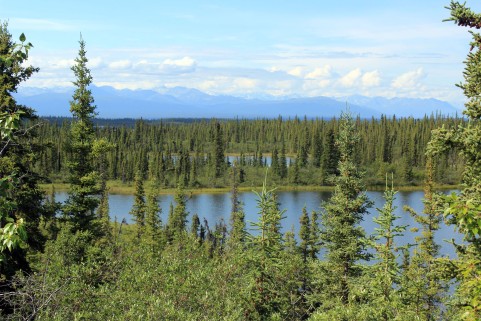 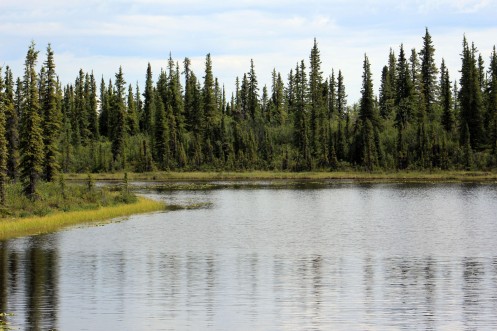 Because of all the water this was the first place I have experienced big flies.  They were about the size of a bumble bee and whenever I stopped the truck to take a pic they were right on me.  No bites, but the mosquitoes and flies definitely took some of the fun out of it.  Then I finally hit Lake Louise campground and the Lake.  The sites are $30 a night and there were some that fit big rigs, but I didn’t think it was anything special.  And the Lake itself is very large, accommodating bigger boats, but again no big deal.  I should say though I am not a fan of most lakes (Tahoe being a notable exception) probably because I neither boat nor fish.  And since the day use fee was $7, I stopped only long enough to check out the campground, use the pit toilet (which was clean and well stocked), and take a pic. 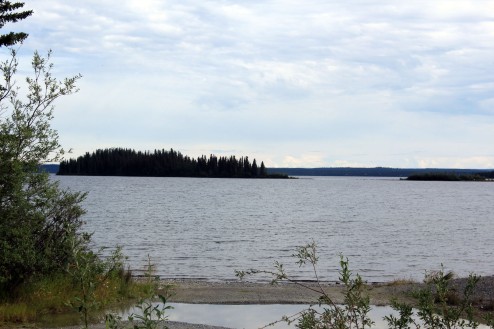 Then I turned back and drove back up that crazy road (definitely not worth it), but did stop again for more glacier pictures.  I decided since I was so close I would check out the small swan pond again and score!!  The family with their cygnets (rarely get to use that word!) are living on this small island in the back. I was just able to get a pic of the adults at least.  I heard that 95% of the world’s trumpeter swan population nest in this area, which is very cool, and I am so glad I got to see them even from far away.

You can kind of see the babies, the feather balls to the left 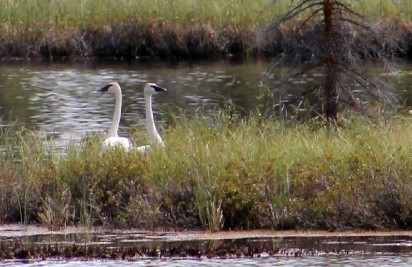 This was my best shot

Going to go back there to and hopefully catch them in the water.  It’s on the left about 1-2 miles past the road to Lake Louise towards Anchorage, FYI. Don’t know if they come back to the same spot every year. After that fun, I came home and tried to keep quiet while Lee finished editing.  It always takes him longer than he estimates and once he is side tracked it’s hard for him to get back into the rhythm of it. Luckily we have had active participation in our “Take a Book, Leave a book” area and I had picked up a new book to read.

Monday was another dessert night and although I have been having better than expected success I finally ran into my first disaster.  I have never made a lemon meringue pie before but the directions seemed straight forward and I thought I could easily use a sugar substitute and make it sugar free.  Well it turns out that only a few sugar substitutes will work, and I could have beat the thing all day and never made a meringue.  I punted, and cooked it anyway and ended up serving sort of a lemon soup/souffle.  I did have a second desert which turned out just fine thankfully and near the last minute I sent Lee to the store on an emergency watermelon run.  Still I served it and several brave souls tried it.  To a person they said it “tasted” good, but I think they were just being polite.  Still when the mother of a large Mennonite family gave the taste a thumbs up I felt better.  I have no doubt she knows how to make a pie.  It was fun though and folks seem to get a kick over my baking successes and failures, and I am pretty honest with them that I am a new baker. 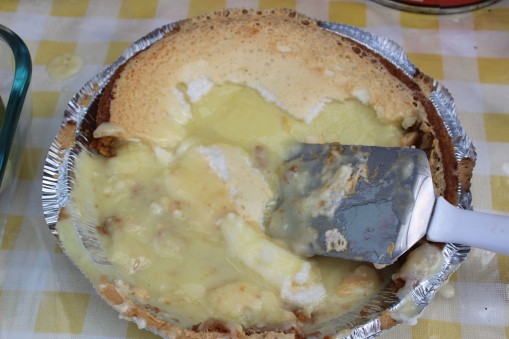 Here’s my lemon “soup”. Linda I thought you would get a kick out of this! 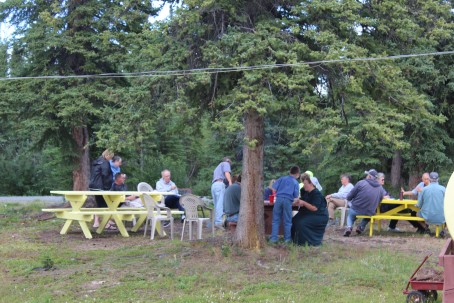 Oh and something else super exciting happened.  A new food truck opened by the visitors center with Mexican Food and I tried it and it was fantastic!!  The owner (who is originally from Mexico City) had a restaurant in Valdez for many years, but he got tired of all the hassle with dealing with a restaurant as he got a little older, so as a semi-retirement he sold the restaurant and decided to open a food truck.  His crab and seafood enchiladas were outstanding and at $12.99 were reasonably priced.  Still I need to be good, so I am forcing myself to not go down there, but finally there is some food in town I am actually tempted by. 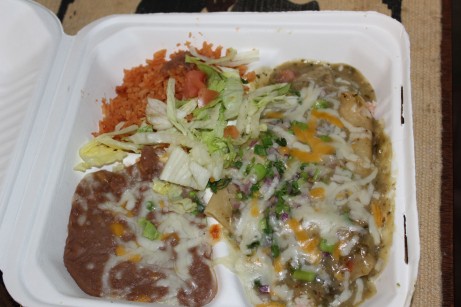 After this work week is done we will be spending a weekend in Denali.  We have exhausted most of the day trips in the area, so will need to go further afield.  Since Lee really doesn’t want to move the rig, we decided to splurge and get one night at a resort right in Denali park.  To be honest I am more excited about seeing HWY 5 than Denali itself as that is a popular hunting road with the locals.  It’s 100 miles of unpaved road though and driving that twice in one day would be to much even for us.  Originally I wanted our tax return splurge activity to be a air tour of Wrangell-St. Elias, but when I found out taking pictures or video would be extremely difficult I decided to go this route instead. It will cost a little more since we will have to pay for some meals as well, but we figure the OT we have been getting will cover that.

Anyway, it will be a few days probably before I can get a post out.  I am guessing this is going to be a 600-700 picture trip, so stay tuned.  It should be spectacular, and please cross your fingers that despite the forecast it won’t rain the entire three days we are there!!

Leave a Reply to caroline in Seattle/Las Vegas Cancel reply