Glenallen is a natural stopping point on the way to Valdez and I kept hearing from our guests how beautiful the drive down there was.  Their feedback, coupled with the fact that this road was named one of the most beautiful in America made the drive an obvious choice for our first sight seeing day trip.  Our goal was to make it down to Worthington Glacier and put a major check on my bucket list by walking on it.  So we got up on Sunday, packed a lunch, and headed out.  The first 40 miles or so from Glenallen was nothing special.  The road is not in great shape (it’s not Tok Cutoff bad, but not great) and the scenery was largely forest.  Then about 40 miles in, we saw this. 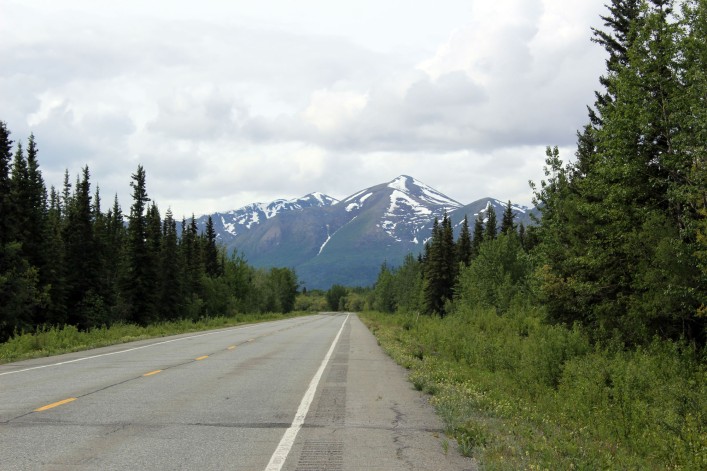 One of the coolest parts of the drive from that point forward, and something it actually took me awhile to realize, was there were waterfalls everywhere.  The lines of snow coming down from the mountains are actually part snow and part waterfall.  Once I was clued in, I was transfixed.  I haven’t seen that many waterfalls all in one place since I visited Kauai with my mom, and being able to stop and take pictures of them was amazing. 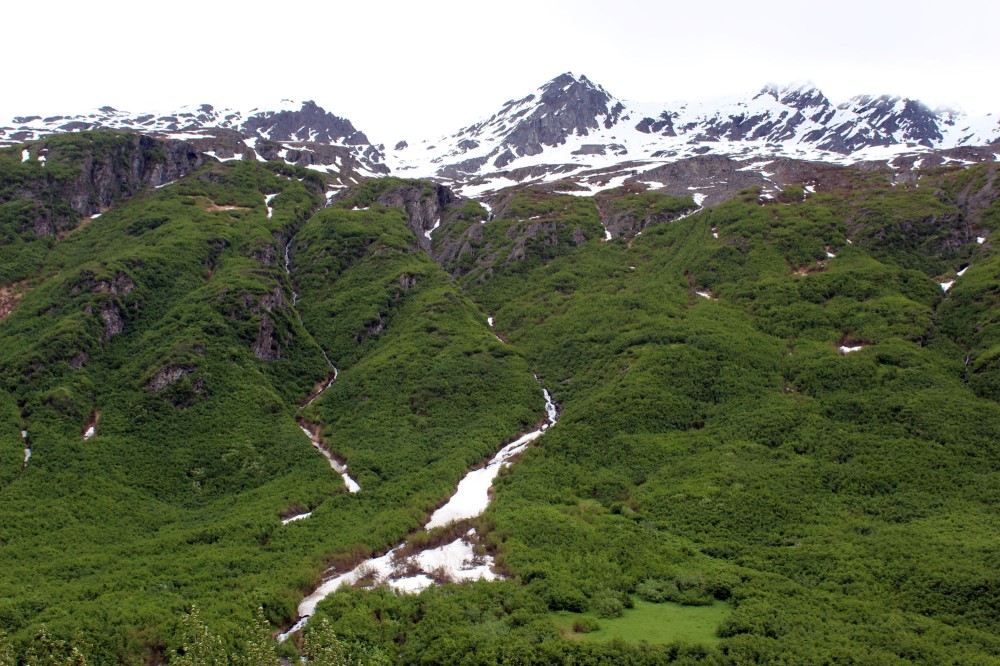 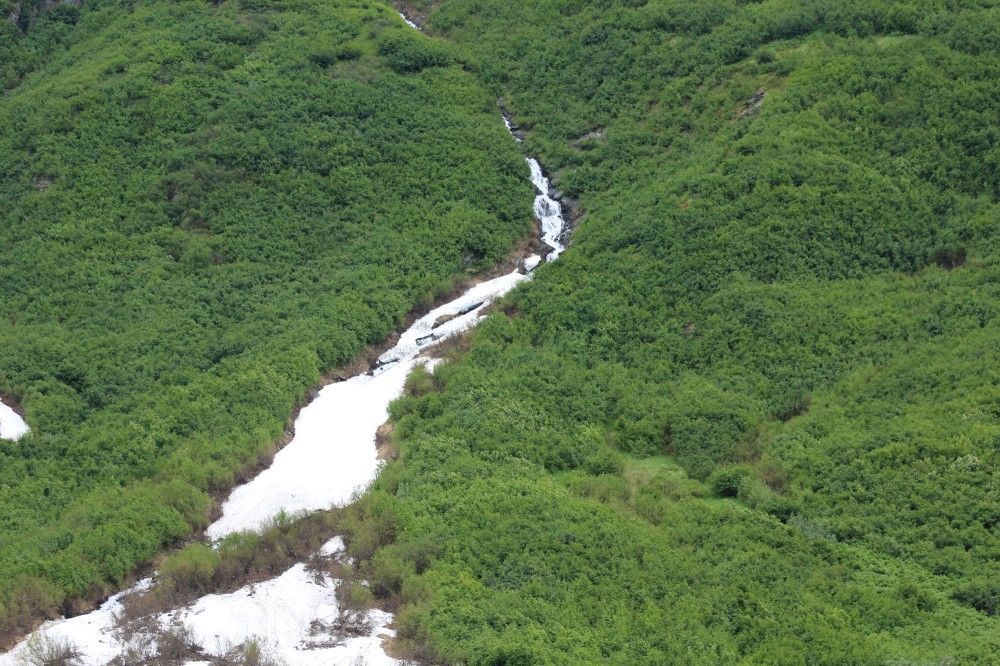 The upper section is waterfall and it runs under the snow cover, which is why I missed it at first 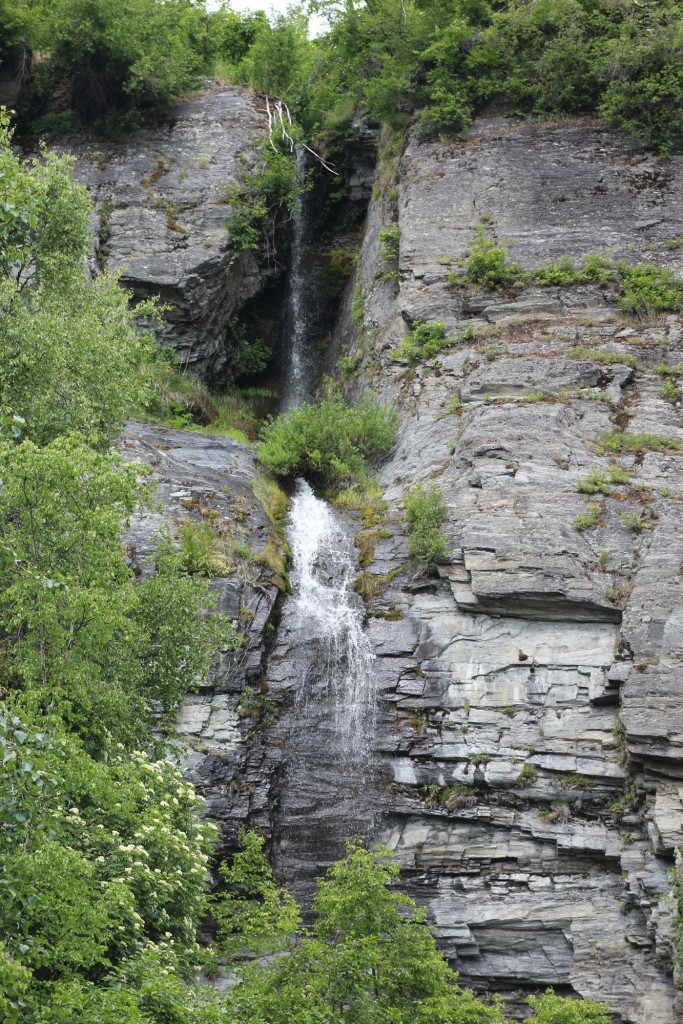 Some were more obvious 🙂 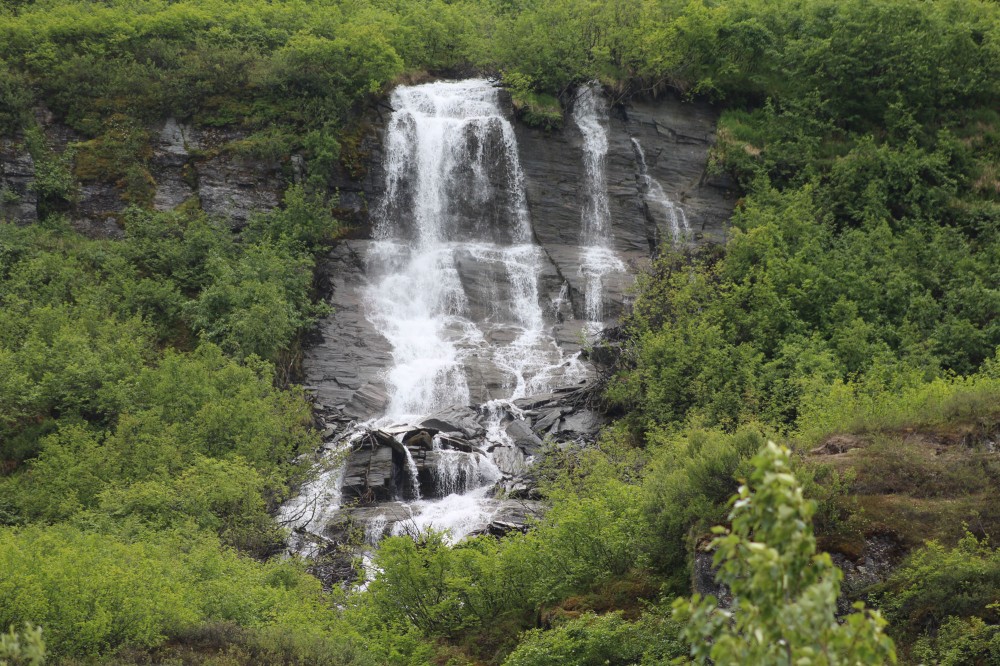 Along with the numerous waterfalls was breathtaking scenery.  Glacier rivers ran through the scenes along with many different types of mountain terrain.  It really was a feast for the eyes and it was difficult not to stop  every 5 seconds and take a picture. 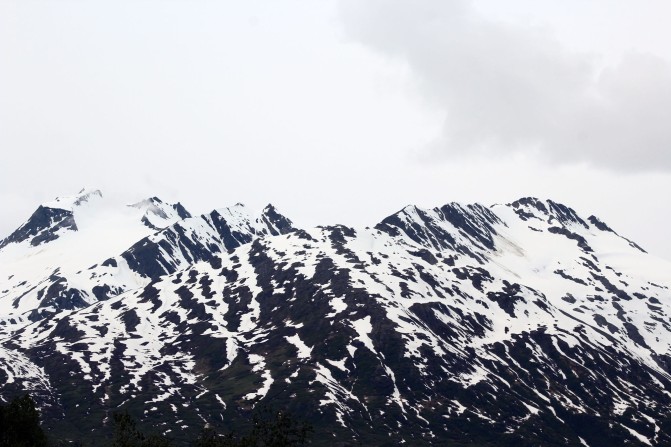 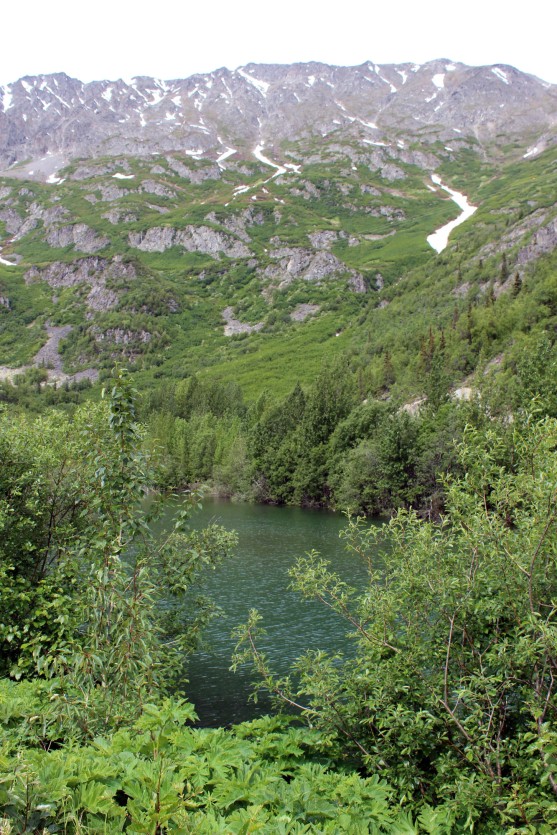 We also caught some glimpses of the pipeline as we traveled.  I have been hearing about the pipeline my whole life and I don’t know what I expected but aesthetically it wasn’t really a big deal.  I can’t comment on how it impacts animals, but the pipeline itself was largely unobtrusive as it sat pretty far back from the road and usually was hidden by pine forest.

Then suddenly we turned a corner, and there was the glacier.  We had seen a glacier on the way to Alaska, but the Worthington Glacier is much closer to the road and appears much bigger.  It has been designated a Federal Monument and there is a nice day use area to park  in so you can walk up.  The terrain to get there is loose gravel, but if you are careful it’s definitely walkable.  Or you can just stop at the paved section and take a picture from there.  If you are at all able though I absolutely recommend walking up.  I’ll let the pictures show you why. 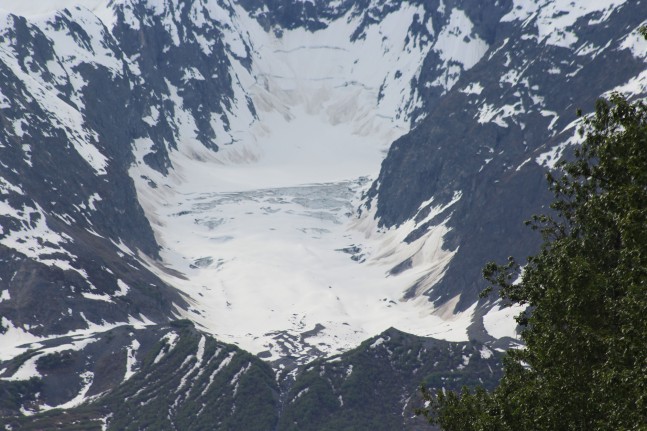 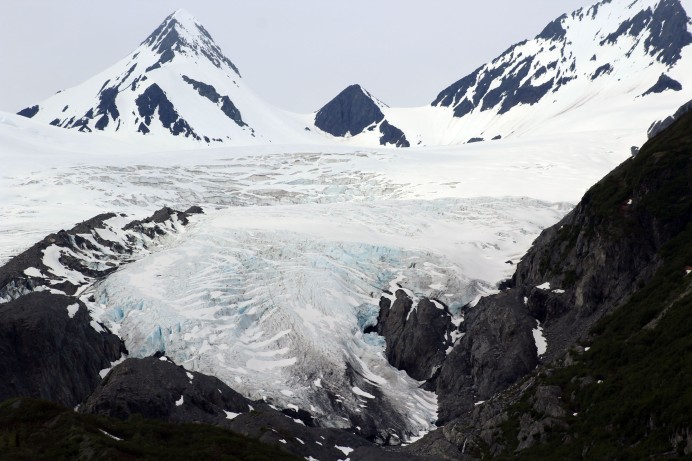 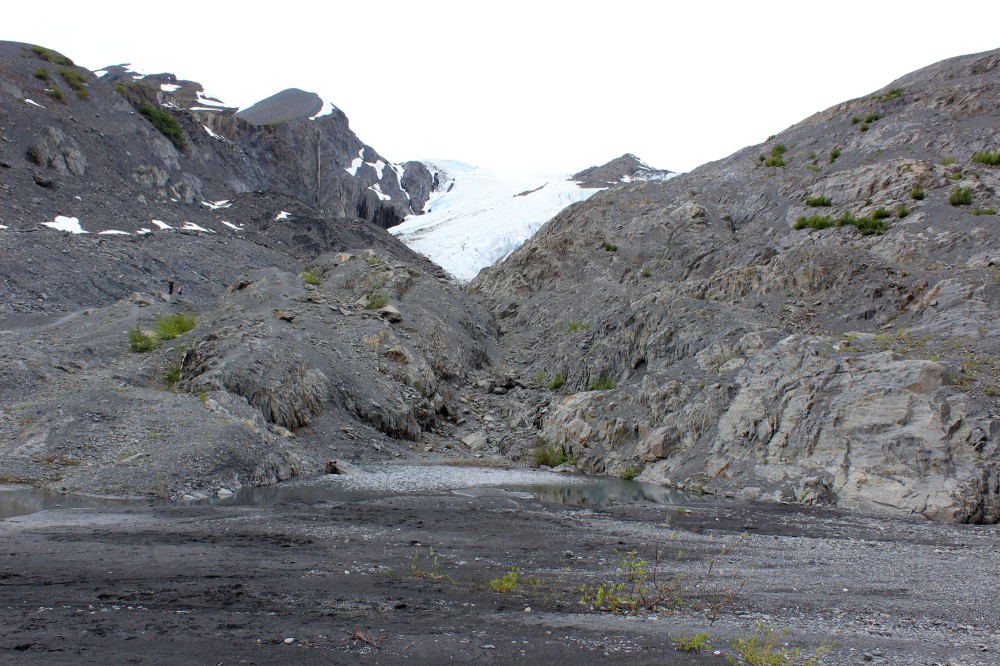 The walk to the glacier looks much worse than it was.  See the little people on the left

These giant boulders were pushed by the glacier and then left when it receded. They were huge 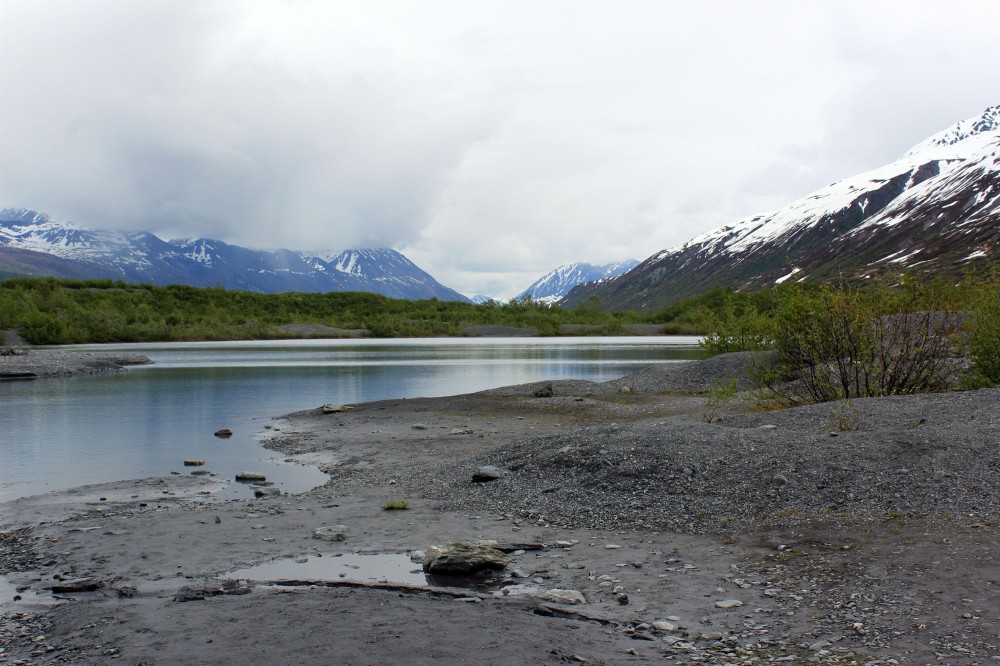 Our first views of the glacier made the walk so worth it.  The group of kids on top had a guide and equipment and walked up into the glacier itself.  Not recommended unless you have metal spikes for your shoes. 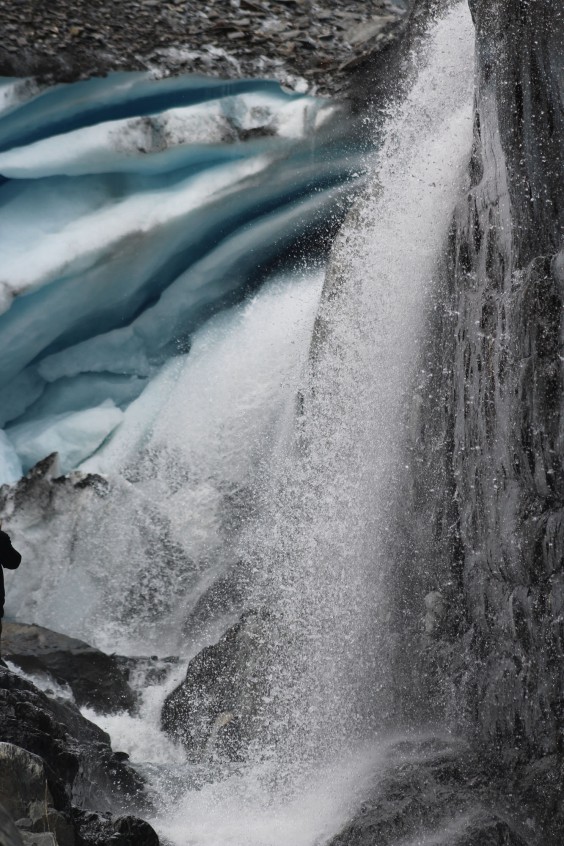 Took so many pictures of this shot from slightly different perspectives. Wow.

Lee getting some video

There were some people there, but everyone took turns getting their shot and allowing others to do the same. Sunday mornings are a great time to see things like this 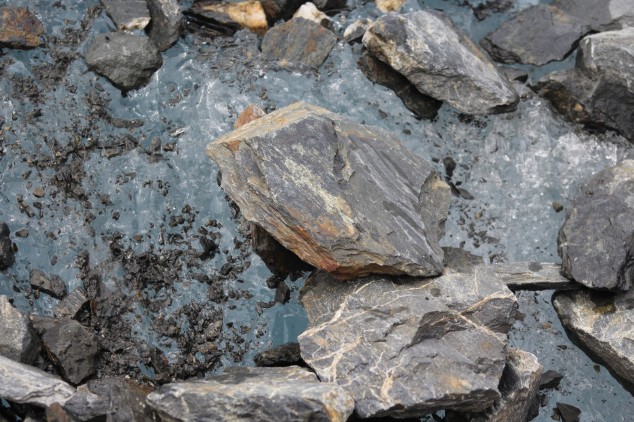 This is what I had to walk on to get onto the rock in the picture above. It is dirt, rock, some snow, and a thick layer of ice. Very slippery, but I wanted to walk on it

What I didn’t expect were the waterfalls. The running water has cut the most beautiful “stair-step” gorge, and we actually spent more time on the rocks with the water. The people who were visiting largely just looked at the glacier and skipped the waterfall area, so we were along down there for a long time.  Unfortunately,  Lee kept leaning closer and closer to get “the shot” and I finally said “Veto” because I was afraid he was going to fall in.  The water was running very fast and going into the gorge would have been extremely dangerous.  He was having a wonderful time though.  I got some of the best pictures of him I have ever gotten and he said it was in his top 5 experiences since becoming a full timer. 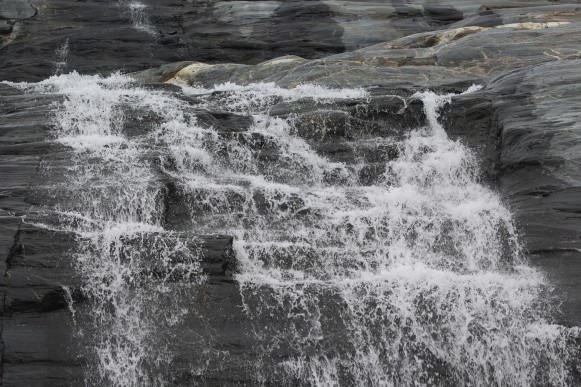 I loved how this waterfall went down then across and then down again. So beautiful 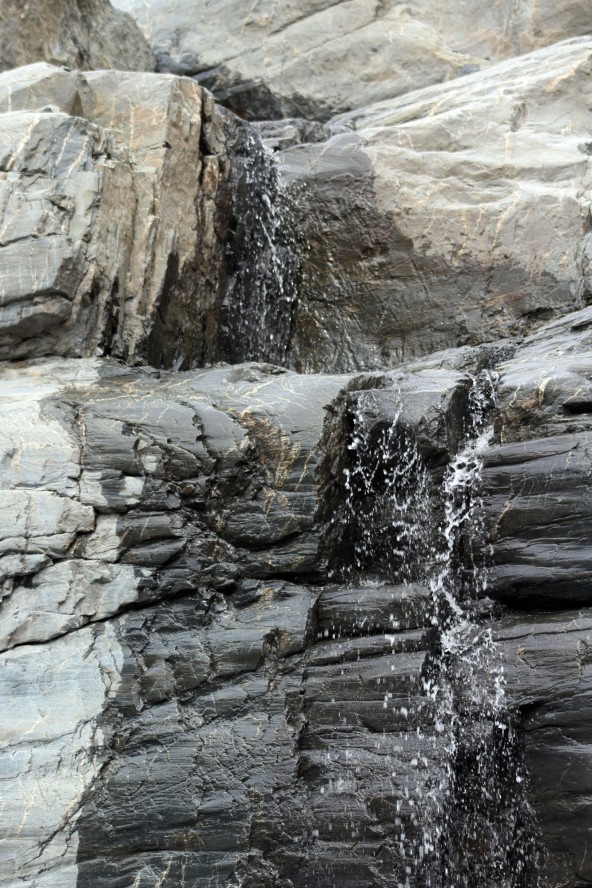 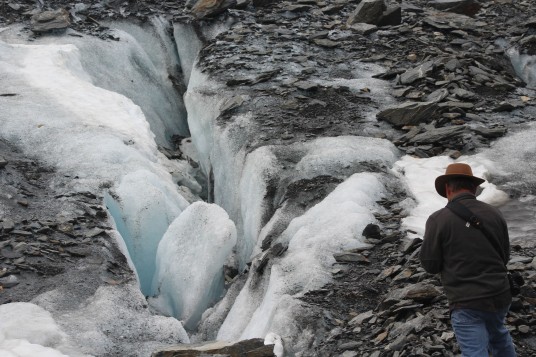 Loved the water running under these snow mounds 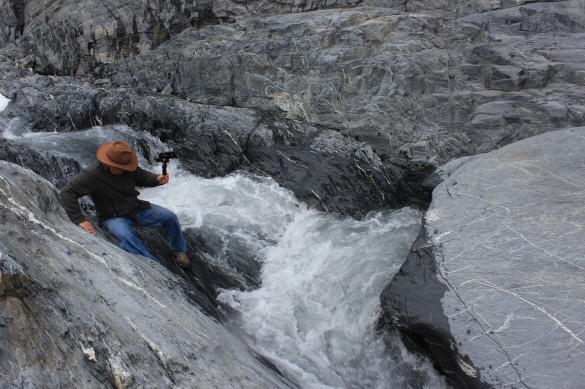 this is where I called Veto!

Not ok you goober!

It was an absolutely lovely day and we could have pressed on and seen more, but we decided to call it a day.  We are here for several months and there is no need to cram it all in, so we drove back home had a nice dinner, watched some TV and went to bed.  Some things are special enough that they should really stand on their own and this experience was definitely like that.

Here’s some of the video Lee shot. If you have the bandwidth, be sure to watch it in 1080 and full screen. He didn’t put in any music because the waterfalls make their own music.

(I take no responsibility for the video making you need to pee. – Lee)

19 thoughts on “First Time Walking on a Glacier”