Dave and Sharon took Friday off from the music festival in New Orleans and spent the day with us.  They went on a bike ride and then I went with them on a walk on the trails.  The trails were ok, but I really wished they added some through the marsh as the bird watching was a little limited.  Afterwards, Dave and Sharon cooked us a fantastic shrimp and chicken skewer dinner.  It was really sad to say goodbye, because the time with them was too short for all of us, but look forward to seeing them down the road when they come out west.

Dave picking us berries from the trees 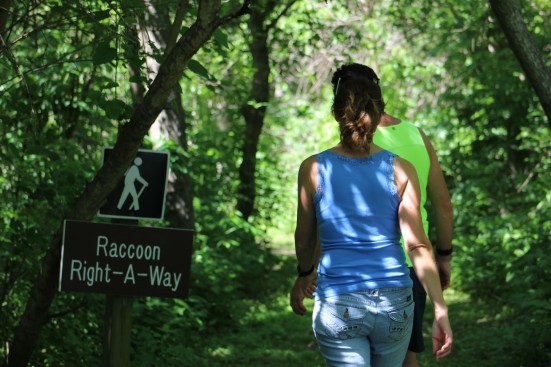 Did see a beautiful blue heron

Turns out these are made by crawfish, which is why they are also called mud bugs 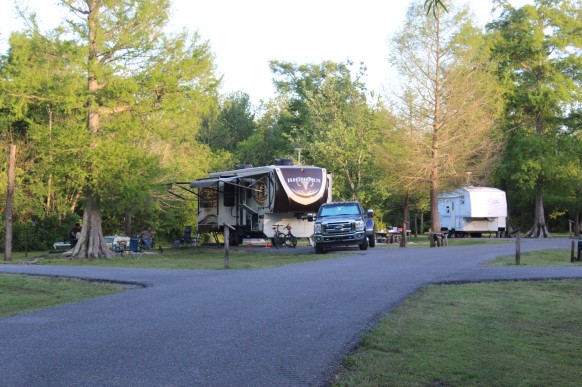 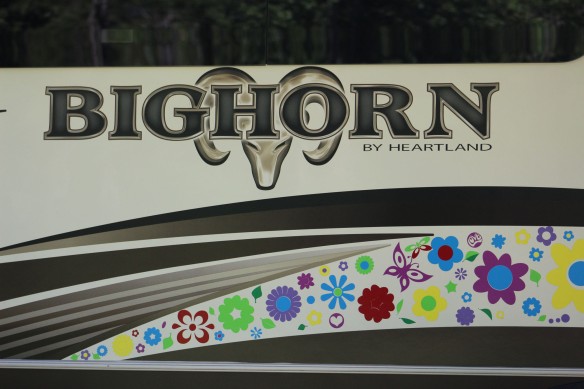 Love the flowers Sharon added on the outside 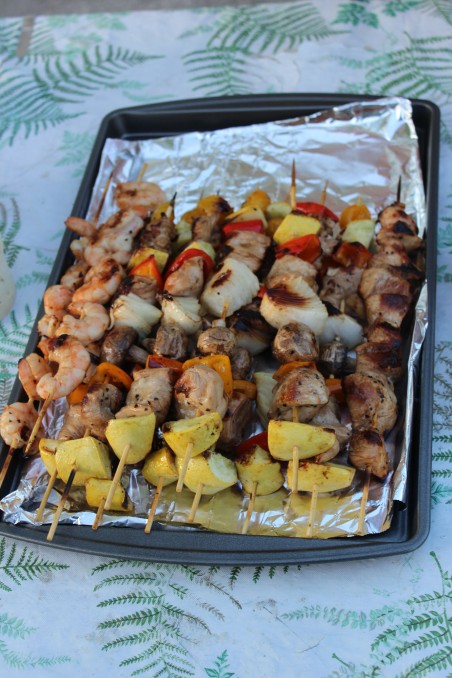 Yummy!! There were only 2 left when Lee was done lol

Oh and did I mention I have serious refrigerator envy. This is NOT a residential fridge but the latest and greatest in propane fridges. I really want one.  We missed this model by just a few months ::sigh

Next up was seeing Sue/Guy and Jo/Craig in Birmingham, Al.  Even though it was a 7 hour day, we decided to push through and get there in one day.  Turns out Saturday morning is a great time to pass through New Orleans and we had no issues making it around the city.  Also, despite all the horror stories we had heard about I-10 it was actually a good road.  They had resurfaced it recently and we had no issues all the way to the Gulfport/Biloxi area.  This is probably because of the casinos that have sprung up there and the desire to get the New Orleans folks to come out, but for whatever reason the roads were good.  That whole section of Mississippi looked really intriguing and it is definitely going on my list for a return visit.  The road did get a little rougher from that point until we hit Alabama but really nothing too terrible.  The drive was pretty with lots of green and rivers throughout and we made better than expected time.

Thankfully the campground they had selected for us was on the south side of Birmingham though, because the traffic did start to get a little worse as we got closer to the city.  We try to time big city driving earlier in the day when we are fresher, but in this case it just wasn’t possible.  Thankfully, Sue and Guy met us on the highway and took us in the last little bit, because it was really tough to find the campground.  It’s not actually a traditional campground, but an RV parking area of the Hoover Metropolitan Stadium.  They had added full hookups to a section of the parking lot, Hoover RV Park,  and allowed people to camp there in the off season. I didn’t mind the parking lot so much because it was just for a couple of days, but I did mind paying $32 a night for a parking lot with a special event going on next door in the baseball field that played extremely loud (and bad) music until 10 o’clock at night.  Apparently they rent out the stadium for special events and due to the acoustics the sound was really really loud.  Thankfully there must be some kind of neighborhood noise regulations, because it was blissfully quiet after 10pm.

Initially we didn’t stay there long though, because everyone else was over at Oak Mountain State Park. One of the downsides of flexible travel plans is sometimes you cannot get into a place, and this was unfortunately the case with Oak Mountain.  More so because it seems like one of the best state parks I have ever seen.  It is very pricey at $40 a night, and the campsites themselves were older, but the park is huge with all sorts of activities including horseback trails, an archery range, tons of bike and hiking trails, and boating.   Guy/Sue/Jo/Craig got us a day pass, so we were able to enter to visit with them without paying $5 each which was nice.  They also made an excellent dinner of taco salad and homemade chips and guacamole and we spent several hours getting caught up.  We haven’t seen them since the Reunion rally almost a year ago and although you keep track of people through Facebook and blogs it was nice to catch up in person.  The next night they made spaghetti and I was starting to feel a little guilty because people kept feeding us.  Lee by the way was totally OK with it  and anyone who has fed him knows how great he is to cook for because he really loves his food.  So it was a very pleasant couple of days and then we were off again, this time to Georgia. 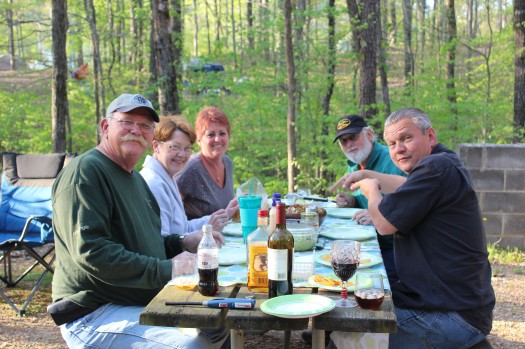 From Left: Craig, Jo, Sue, Guy, and Lee. Lee wants me to sit down so we can eat lol

Oh and Jo made chocolate pie which was excellent. She knows how Lee loves his pie

And Craig our fireman made a great fire. I’ve missed these since the Outer Banks!

Our next stop was Chattahoochee Bend State Park south of Atlanta. This park was the closest we could find to that area of Georgia and although 1 hour plus from Atlanta was a nice park to stay in for a couple of days.  Because Lee is a veteran we got 25% off and only paid $21 dollars a night for a huge site in a well wooded area.  There is a river in the park and numerous hiking trails, but we didn’t see any of that because we ended up spending most of our time exploring the area outside the park.  My main issue with it was the complete lack of ATT signal (I did have 2 bars of Verizon), but otherwise it was perfectly nice and reasonably priced for the area.

I should probably take a moment here and mention that if our pace is tiring for you, I get that.  We have never moved this way before either, stopping in a place for a couple of days and then moving on, but it’s not as bad as I thought it would be.  Since we only stay a couple of nights, you deploy your stuff minimally which makes packing up much easier.  It’s also giving me a chance to practice my hitching and unhitching, something I will be posting on once I feel I have mastered it, and the combination of seeing people and stuff has made it fun.  I do find I get tired though, but since we will be in the same place for 5 months this summer we are packing it in now while we can.

We had come to this particular area to visit a friend of ours who had recently moved to Atlanta and to see the areas where The Walking Dead is being filmed.   I’m going to save that review for another post though and instead tell you about our wonderful visit to The Whistle Stop Cafe.  Lee has started checking areas we visit to see if any movies were filmed there and he saw that Fried Green Tomatoes (one of my favorite movies) was filmed in the area.  The restaurant was originally an old  closed down hardware store, and for the movie they turned it into a cafe. When the production was finished, it was left behind, as is often the case, and someone purchased it and turned it into a real cafe.  Wow, did the experience blow me away.  The cafe looks exactly like it did in the movie and more importantly the food was reasonably priced and absolutely fantastic.  It’s kind of out of the way to visit it, but I had the best chicken tenders (which were huge slabs of chicken) of my life there and Lee loved the fried green tomatoes.  The whole experience was a 10 and made me really love my husband, because it would never even have occurred to me to look for it.

Here’s a screenshot of the cafe from the movie, which takes place in the early 30’s

The little town is really cute with several small shops

And here’s two shots of those same buildings, from the movie: 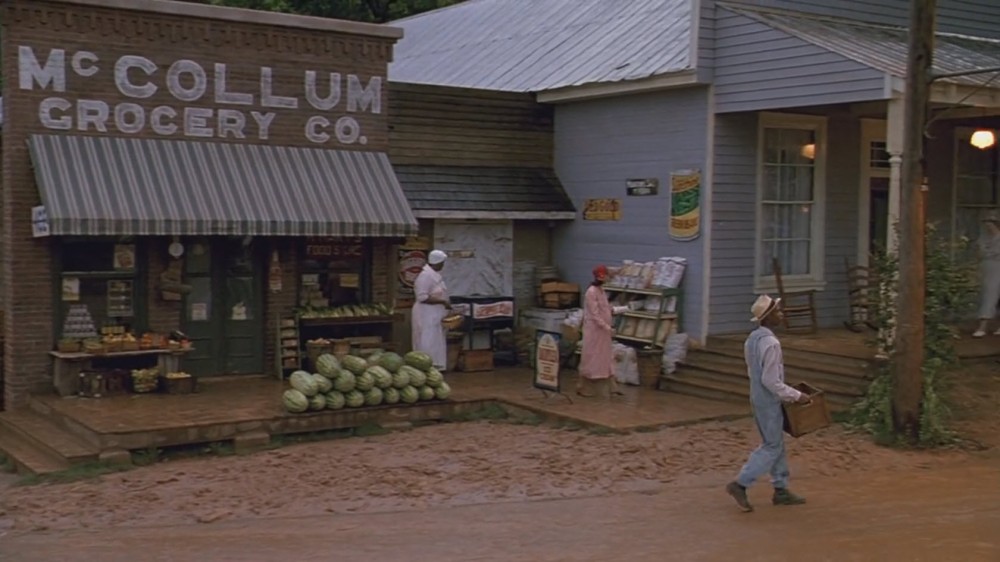 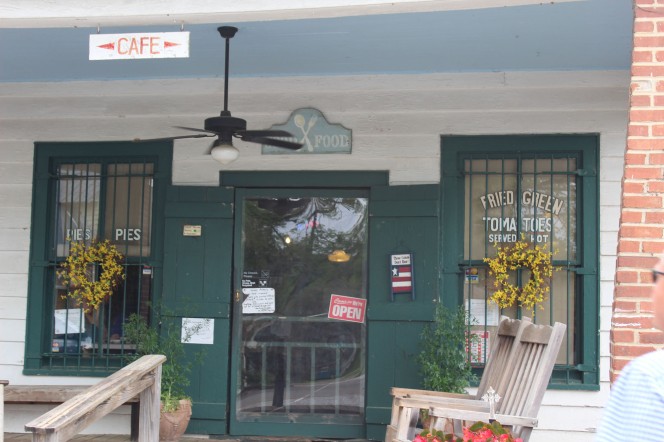 Here are some interior shots of the cafe from the movie, the first from the back of the cafe looking towards the front,

and the second from the front looking toward the back:

Locals sitting at the counter just like in the movie 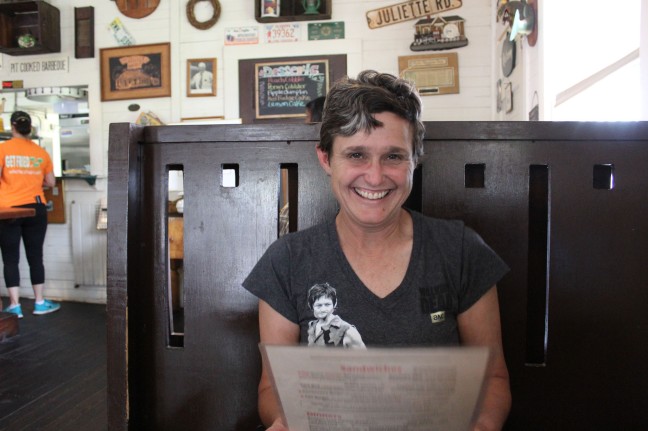 The booths are identical 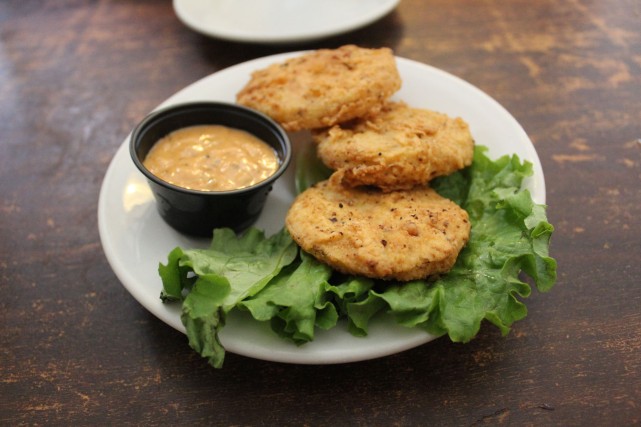 The fried green tomatoes.  This is a half order

Whose enjoying his tomatoes 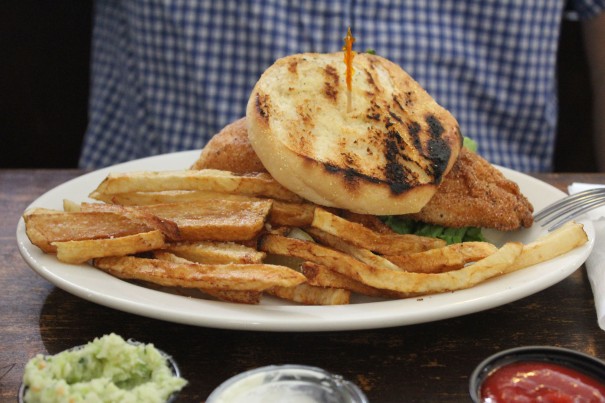 The “train station” is now a gift shop

Ruth and Idgy’s house is a shop 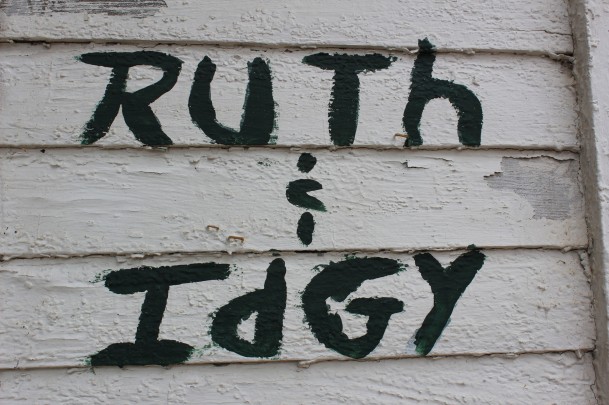 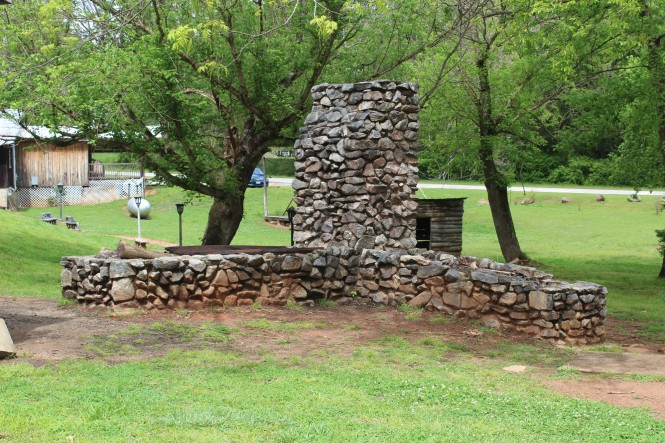 Here’s a screenshot of the pit from the movie. You can see Smoky Lonesome’s cabin the background. 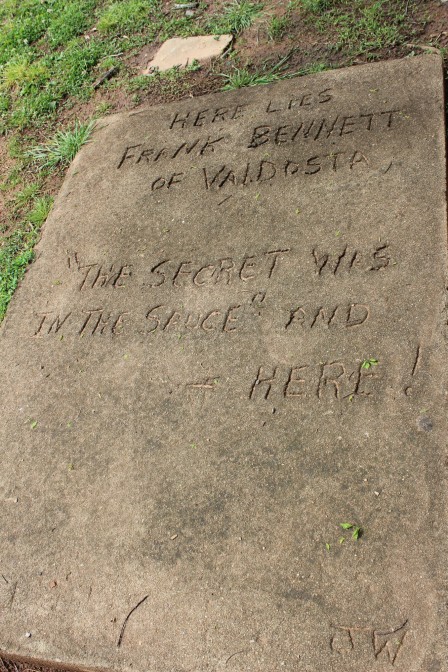 Fans of the movie will get this

This cracked Lee up

So Juliette has done a great job of capitalizing on the movie without losing their town in the process.  Tons of locals were eating at the restaurant and the high quality food, paired with reasonable prices will keep it that way.  After visiting the cafe, we watched the movie (Lee for the first time) and it was so fun to see the movie again having just visited the place it was filmed.  Next up the locations where Walking Dead is shot and a visit to Atlanta to see our friend Brian.

7 thoughts on “First Time at the Whistlestop Cafe”