After the fantastic experience of the Tuscon Desert Museum we knew it would be hard for anything else nature related to compete, so we totally switched directions and went to visit  Biosphere 2 on Friday.  But, before that, on Thursday we had two very important social interactions.  The first was lunch with Lee’s step sister who he has rarely seen, since he was very young. We moved to New Hampshire and she moved to Phoenix so it was wonderful that we were close enough to visit and the two of them could get caught up.  It was a great lunch that ended up being 3-1/2 hours (luckily the restaurant wasn’t that busy so I didn’t feel bad about camping out there) and I am so glad I got to know her better.  We plan on spending quite a bit of time in the Phoenix area so we look forward to spending more time with her in the future!

On the way back Lee heard from Scott, his good friend from RV Tech school.  They happened to be in the Tuscon area, and wanted to have dinner.  After months of preparing they were finally full timing and we were excited to catch up with them and hear the story.  Plus I had never had a chance to meet his wife Bonnie.  So we all met up at a Chinese restaurant and spent a couple of hours with them (and Cori and Greg) swapping stories and commiserating over how tough the first few months of full timing is.  Very few couples launch into the lifestyle without some initial challenges and Scott and Bonnie (who bought a 1998 Beaver Class A) were no different.  Things were smoothing out for them though, and I was really interested to hear how successful Scott had been getting his RV Tech business going in their former hometown in California prior to them heading out on the road.  So it was a nice (but somewhat expensive) day, and it was so great to meet up with them.  As a side note I didn’t get any pics,but I find it awkward to pull out my camera and take pictures when I don’t know someone that well.   Feels rude or something, although I am sure they wouldn’t mind.

We were all ready to head to the Biosphere on Friday though because the clock was ticking on our time in Tucson.  For the first time we are trying staying in an area for a few days and then moving on, and I have to say neither one of us is much of a fan.  Tucson was amazing and there were so many things we wanted to do, you simply couldn’t fit it into a few days.  Plus we essentially lose a day every time we move (between packing up, dumping, and unpacking) and the more “lost days” the less things you can do.  And to be honest the pace was just too hurried for me. It’s one thing if we take several days to move between point A and point B, but stopping and starting is just not for me. Since that was the plan for New Mexico I’m not sure how that will play out over the next few weeks, but we are already talking about extending one stop and skipping another altogether.

For those of you who don’t know, Biosphere 2 was a privately funded project where 8 scientists lived in a closed dome environment for 2 solid years.  There is a ton of misinformation about the project, but the real story is fascinating.  First off Biosphere 1 is Earth.  Biosphere 2, which was man made,  had two separate missions.  The first went the full two years and the second was cut short at 6 months. Despite the rumors the scientists did not cheat on food, and ended up losing an average of 16% body mass in the experiment.   So in order to survive they needed to spend the bulk of their time raising food which seriously cut into research.  That was very interesting to me and falls in line with Maslow’s Hierarchy of Needs theory. The theory states human beings have to take care of each level of need before they can focus on higher functions.  That’s why third world countries aren’t as developed technologically as more advanced countries are because so much energy and time goes towards the physiological. As you can see problem solving and creativity are way at the top.

Sorry, went on side track there, but I do think it is important because Biosphere 2 was supposed to be a test to see if people could live on Mars, or in or outer space. Aside from the food issue, the real failure ended up being the inability to create enough oxygen to sustain the project.  About 6 months in they discovered a raising of CO2 levels and lowering of oxygen levels.  Turns out that as concrete cures it lets off Co2 which they did not originally account for.  Eventually they made the choice to bring in oxygen and complete the full two years of the project to see what else they could learn.  I ended up buying a book written by one of the inhabitants called The Human Experiment

which I am a few chapters into and is very good so far.  Even if you don’t care that much about the science stuff, it’s still a neat tour.  We got a 2 for 1 deal with our Tuscon Attractions book so it was $10 each.  Brian, our tour guide, was excellent and really took his time to explain each area which I appreciated.  Plus the absolute coolest thing was in parts it felt like you were on an actual space station and I loved that.

The building that held the rain forest. The green behind the glass is trees.

The Crew Quarters and to the right is the “lung” which has a 16 ton rubber membrane that would expand and rise as the air inside the closed system would expand as the day got hotter, and then contract and lower as the air cooled, to prevent the windows blowing out, or in.

Entrance which was sealed during the experiment

The rainforest was amazing

They created a small ocean with waves 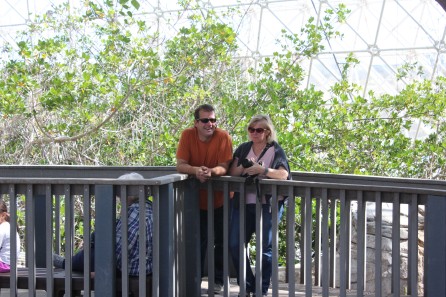 Greg and Cori listening to the tour guide 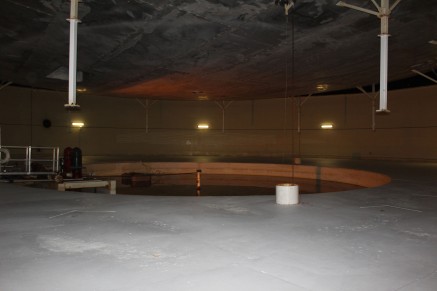 Huge circular room with a giant rubber dome that expands and contracts with gas. 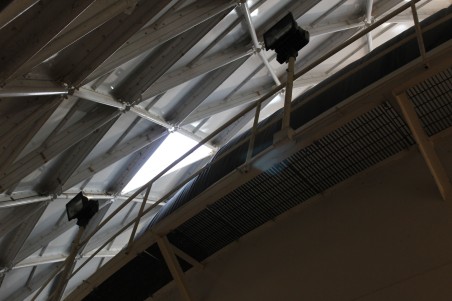 Close up of the rubber bladder, made by Dupont and rated for 99 years.  It’s the black curve behind the railing.

Outside view of the lung

These propane generators were built originally to create enough power for the biosphere, but ultimately it was determined that using grid power was cheaper.

The grounds were really pretty as well.  U of A has a summer camp for kids to live onsite and help the scientists with their experiements.  How cool would that be!! 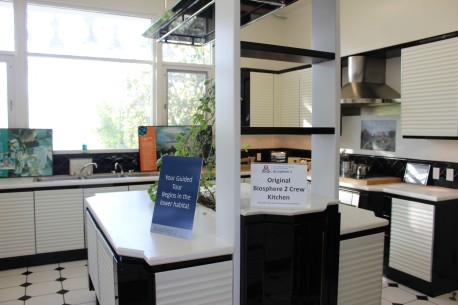 The living quarters were pretty nice. All 8 crew members cooked for one day each on an 8 day rotation. 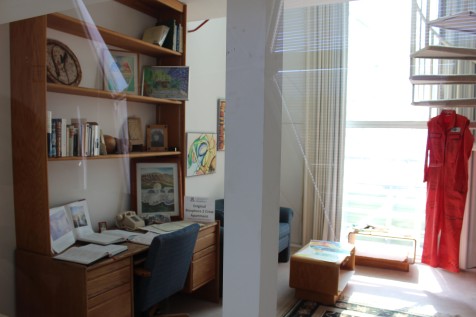 They also experiemented with growing food in these 100% self contained spheres. Greg found this particularly fascinating

View from their “front window”

Here’s a short video Lee made of Biosphere 2. All of the video was shot on his phone, so it’s not as good as he likes, but it’s better than nothing.

As if that wasn’t fun enough, we got a text from our good friends and fellow Class of 14ers Gene and Eileen.  They had been delayed on their trip out west because of some family health issues, but were finally on their way to meet Kelly and Bill at Quartzsite.  Since they were passing right by us, they drove to Tucson and we had a lovely dinner and catching up at our campground. My favorite part was reuniting with Max who is a cavachon just like Hobie. 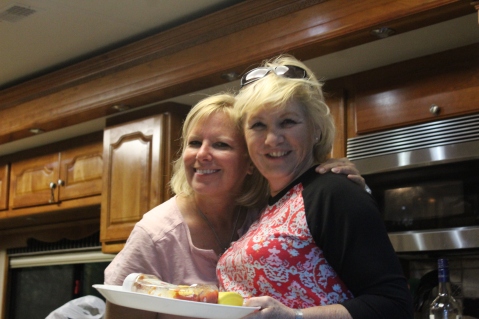 Cori and Eileen…they could be sisters 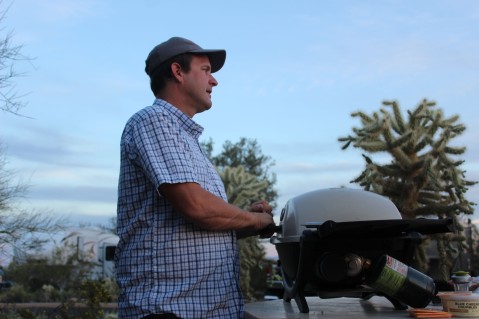 Gene catching us up on what they had been doing

Max with his pre Quartzite clean neat look.  He is so so cute

Hobi looking rough and ready post Quartzsite. The contradiction cracked me up.  He was happy because Eileen brought lots of dog treats.

It was so great seeing them again, but it was time to move on to City of Rocks.  We are absolutely coming back to Tucson and the Gilbert Ray campground in particular which is one of my all time favorites.  Oh, and on our way out we met a couple from Keene (our former hometown) at the dump station.  Liz and Peter became full timers (in a very cool airstream) 45 days after we left Keene and we have roughly been following the same route this entire time.  We didn’t know them when we were in town, but Peter had read the story about us leaving in the newspaper.  What a great couple, and it was such a nice surprise.  They gave us a beautiful book they had made about the Monadnock area and we exchanged cards and promised to stay in touch.  It truly is a small world and if you are interested in their adventure you can read about it on their blog.

3 thoughts on “First Time at a Man-Made Biosphere”