Although the word “boondocking” is used interchangeably, there are many different types of experiences that fall under this category.  You can boondock in a parking lot, or in part of a campground, or in the middle of nowhere.  None are more or less valid than any of the others, but they are all very different experiences because of location and how close your resources are.  When we first started talking about becoming full timers, Lee always talked about boondocking in the desert.  Although Quartzsite was the desert, it wasn’t exactly what he had in mind because there were lots of people around and resources were relatively close. Probably why I liked it more than I thought I would.  But for Lee, the number one thing he has wanted to do since we went on the road was find a little piece of isolated desert and camp.  He had this vision in his head, and as fun as La Posa south was, it wasn’t the vision.  So I went to my  Ultimate Campgrounds app to look at the nearby BLM land.   There are several major BLM areas in Quartzsite and we took a drive and checked some of them out.   Some were near the mountains and others were a bit more isolated, but none were exactly what he was looking for.   Since we had to head north to Vegas anyways, I started to look around the Lake Havasu area and finally settled on “Standard Wash”.  This BLM land allows a 14 day stay free of charge and is right off 95.  It also has the benefit of being reasonably close to Havasu which has water and dump stations.  So after doing some minimal research and then saying goodbye to everyone, we packed up and went down the road.

This was our very first time driving to an unlabelled “spot in the road” and predictably it was a little rocky at first, both literally and figuratively.  There is no big sign saying “Stop Here” and even thought the GPS coordinates were pretty accurate we still missed the turn.  So we drove to Havasu City (about 5 miles north) and turned around.  Then we missed the turn off a second time, mainly because you are going 60 mph on 95 North and the turn-in is literally a dirt road, with no slow-down lane on the approach, and no left turn lane coming from the other way, and no space on either side of the dirt road to ease in. Lee was pretty uncomfortable making that turn without solid information, so we stopped at a little industrial company parking lot a few hundred yards down the road, and asked the security guard at the gate.  Yes, we were in the right place.  So we went back on the road one more time and turned in at GPS coordinates (Latitude 34.420426 Longitude -114.199165).

Right about then a second vehicle would have been a huge advantage. I walked up to a very small BLM sign and yes, we were in the right place.  Lee walked up the hill the road disappeared over to make sure it did indeed continue to be a road. It was, so we started down the track. We could have dropped the trailer and continued on with just the truck, but that is a pretty major pain, so we decided to drive slow and check it out with RV in tow.  I’m not sure if this was the best idea or not, but that’s what we did, and the road, although rocky and narrow, was passable.  It does have some deep dips though, so slow and careful driving is definitely called for.

We kept passing up spots that weren’t that great and finally settled on a spot exactly one mile back.  GPS coordinates were 34° 25’53″N, 114 ° 11’29” W.  (It’s a good thing we stopped when we did because about 100 yards farther, the road completely deteriorates into a narrow track impassable even by just the truck, much less the truck and trailer) The view on three sides was amazing and the large hill behind us would provide a bit of a wind break.  Best of all, totally deserted…and quiet.  Someone had even built a large fire pit there so we were sold.  It took a few minutes to position ourselves perfectly for the best views and then Lee just smiled.  He was happy and I was happy for him, plus curious about how we would do being so isolated.  Well not that isolated.  We have solid ATT 4 G and town is only 5 miles away, but the most isolated we have been. But judge for yourselves, here’s the pictures and a drone video Lee made.  At the very end of the video look in the lower left corner.  You’ll see Lee trip and fall as he walks down into a wash. 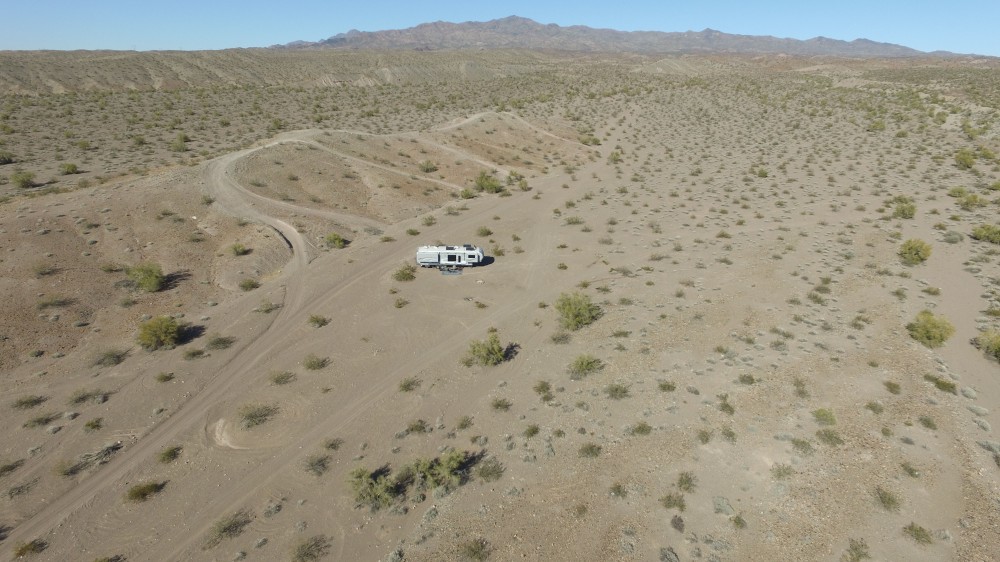 See us in the back…teeny tiny

Amazing views right?  I absolutely agree, but as Paul Harvey used to say, “And now for the rest of the story.”  It’s equal parts cool and creepy.  Keep in mind this entire account is 100% subjective and depending on your personality you might absolutely love this.   I found all the lonesomeness unsettling and my unease seems to be heightened by the fact that the desert itself is inhospitable.  No big sagauro cacti I am so fond of and you really have to watch where you step because things can hurt you out there.  So no casual walks in this place. Even Lee admitted it was a bit weird and for the first time since going on the road I seriously wished I had a gun. Not for the animals, although we have heard coyotes a couple of nights, but for potential human wanderers.  I know it’s extremely unlikely, but I haven’t been sleeping well and Lee is double checking the doors at night so I know it wasn’t just me.  Still it’s a cool picture right and the kind of place we all dream about going before becoming full timers.   Fair enough, but I do think you deserve to hear about the things you don’t see in the picture. 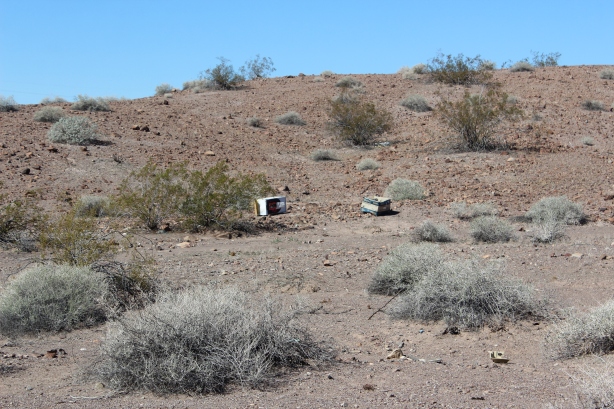 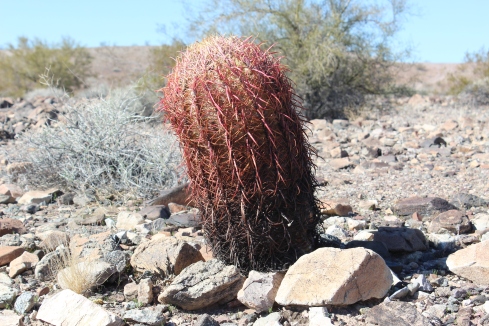 Even the dead stuff on the ground can hurt you

To be clear not all desert is the same, and not all BLM land is either.  This is the most ill kept piece that we have ever been on, which is maybe why it was so deserted.  I really miss the large Saguaro cacti which I think are beautiful, but there are none of those here.    I would definitely be up for trying someplace this isolated again,but maybe that will never be my thing.  I have been low level tense since we arrived here and despite my best efforts that feeling has really not gone away.  Not the greatest way to live.

It wasn’t all bad though.   I caught up on blog work I needed done and it was perfect for Lee to get some editing work completed.  And the sunrises and sunsets were beautiful.   I just wanted to take this opportunity to say life itself is not always like the pictures portray. I understand why that annoys me.  I want the picture, but the reality is there are often things not shown in the pictures that can changes the experience. Then again there are the sunsets, which don’t suck. 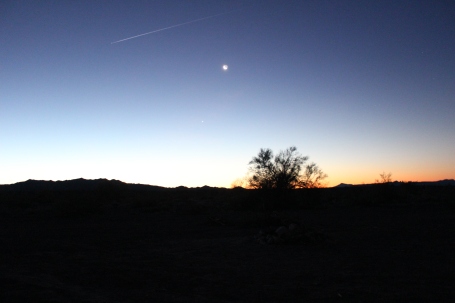 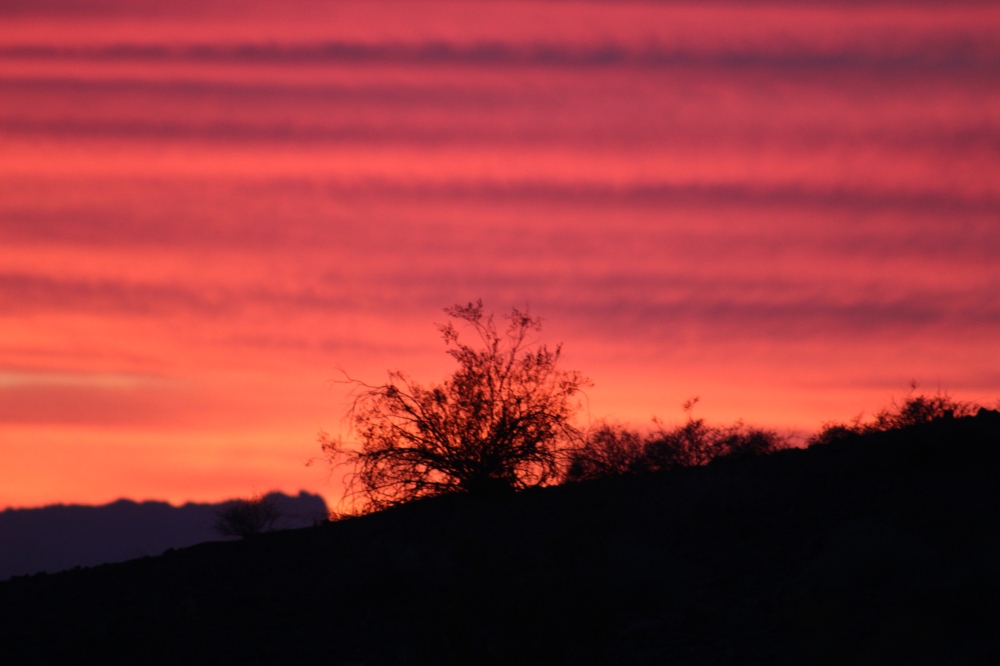 Not photo enhanced in any way

We also celebrated our 27th wedding anniversary in Lake Havasu and that was really fun. I looked on YELP  for someplace to eat dinner, but nothing really seemed right.  Finally I decided to have an anniversary lunch instead.  There is less pressure on lunch, less cost for one thing, and I think in general we have lower expectations and are more willing to try something different.  Turns out this was a good call as we drove down to the London Bridge area of Lake Havasu and found a tiny place called Splash Grill that was only open for breakfast and lunch.  It only had eight tables inside and four out on the little deck.  So we asked for a seat outside and had a great lunch and lovely views (in the sun but out of the wind) for only $20.08.  Score!!

The bridge was purchased by a real estate developer from the City of London and transported here brick by brick.  It was one of four London bridges and obviously not the one with the watchtowers.

They built a man made canal which created an island the bridge could go to.  The  island has a golf course, resorts,  and upscale homes

They did a nice job with the surrounding architecture

In the warmer months this must be a party place 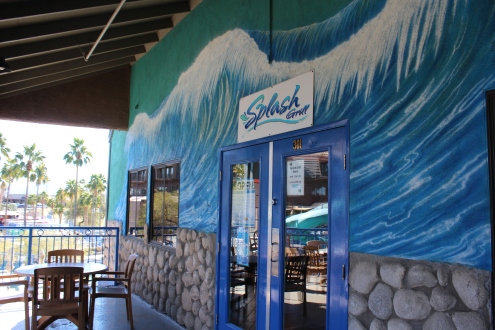 The restaurant we found was on the third level of a building along the waterfront. Accessed from the top of the hill

Courtyard at the top of the hill. Weird to see fountains, but I suppose the Colorado makes it possible

Lee’s fish and chips were very good and reasonably priced.  Plus look who ordered water and used the lemonade pack!! 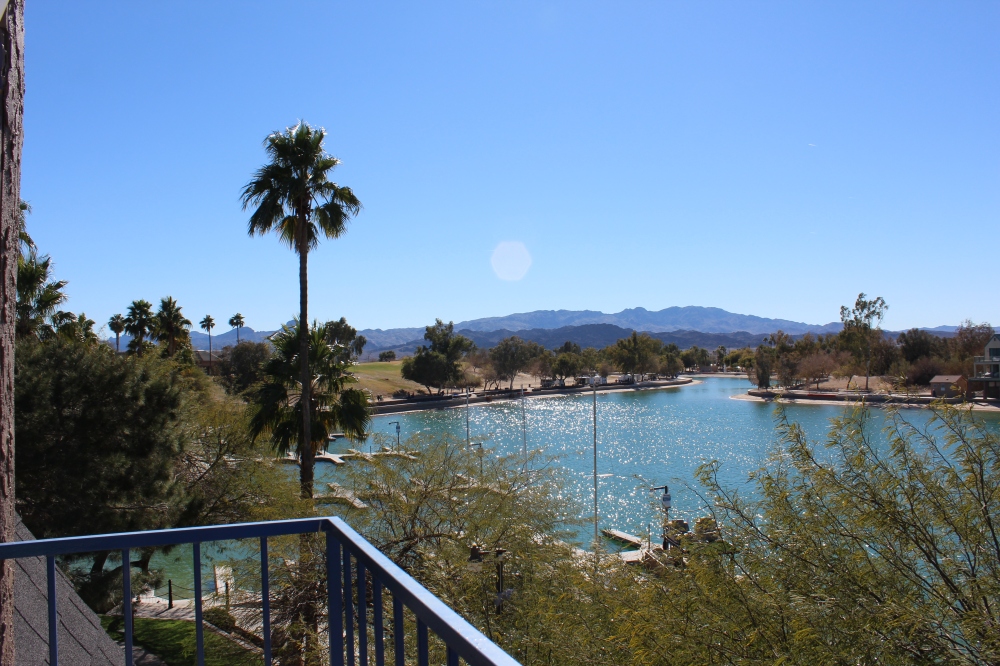 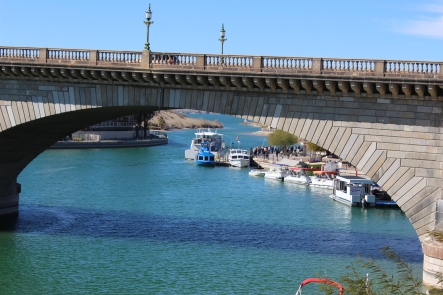 They also have a free ferry to a casino on the California side of the lake. It only ran on the hour out and half hour back so we didn’t go, but many folks were taking advantage of the free service.

After lunch we went to the 99 only grocery store.  Yes you heard that right, there is a grocery store where almost everything is 99 cents. They have produce, dry goods, and a freezer section.  Many of the products are off brand, but they also have plenty of name brands in smaller sizes.  For example, I got a box with two name brand corn dogs for 99 cents.  We also found shredded cheese at 99 cents, some dole shredded cabbage…oh tons of stuff.  We ended up getting 5 bags of stuff for $34.  A pretty good deal.  Then we went to Safeway and Lee bought a couple beautiful rib eyes.  Since we were not having dinner out, Lee decided to cook me one at home and it was really lovely, plus less expensive than the restaurant alternative.

So our time alone in the desert was a mixed bag.  Would absolutely do it again, I wold just be a lot more selective about where we stayed.  Still, it was a good learning experience and Lee got to experience the picture he has been carrying around in his head, which is no small thing.

10 thoughts on “First Time Alone in the Desert”