Wednesday was scheduled to be the longest day of the week long itinerary. Bandfest, where some of the Rose Parade bands play, was first, and then the Ronald Reagan library afterwards.  Although it makes for a long day, I understand now why they split it.  The band event last two days and if you are a marching band enthusiast I can certainly understand why you would want to attend both days, but for us a few hours was definitely enough.  Unfortunately my high school marching band, Grove City High School, was not scheduled for band fest but I was still glad to see a bit of it. The event is held at Pasadena Community College, alma mater for Penny from Big Bang, and the campus was very nice.  When we walked in we were given little drums and sticks and then this very energetic woman talked us through playing some rudimentary songs.  It was fun and the crowd, myself included, really got into it, plus it was a great way to kill time while everyone got seated.

These cool cut statues were artwork around the campus 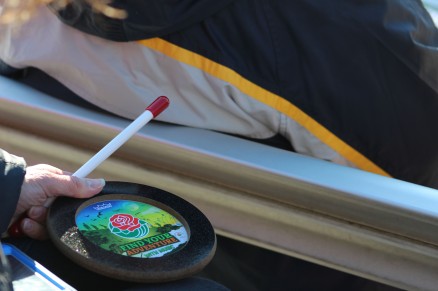 The drums they gave us

The couple who led the crowd participation before the event

First up is the Pasadena City College Honor band which is comprised of current students, alumni, and some of the best and brightest from southern California high schools.  I was particularly impressed by the herald section which walks in front of the rose princess float and the baton twirler who was absolutely excellent and really beautiful.  It’s a dying art baton twirler and I know how hard it is as I spent many hours as a child trying to master it….never quite managed.

The band marching onto the field 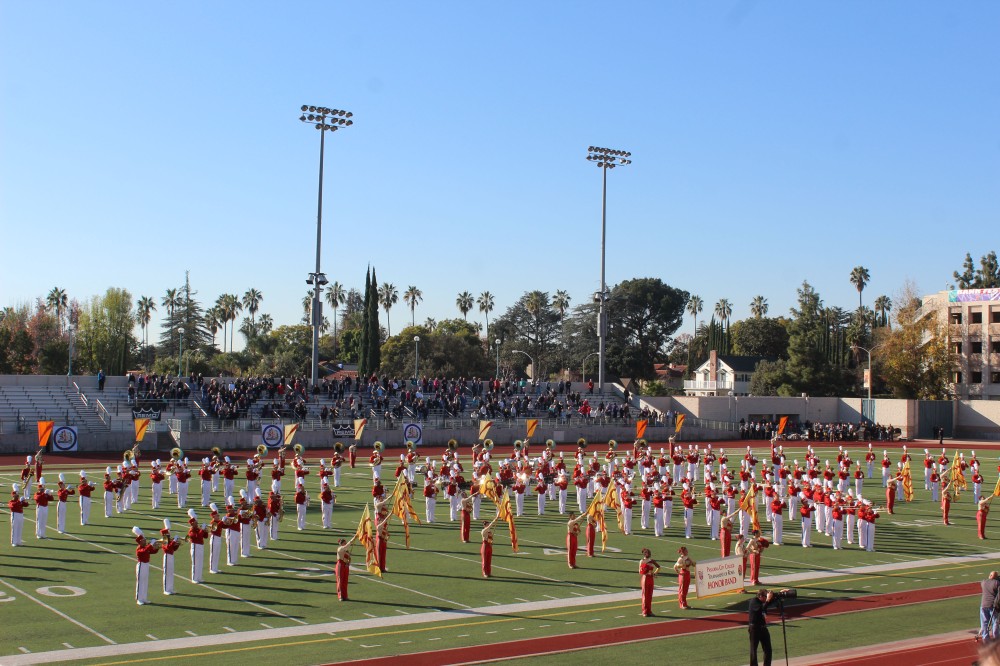 Very excited to see male flag persons. That would never have happened 30 years ago

Next was the Albany State College Marching band. Their dancers were great and it was the long time dream of the band director to take his group to the parade 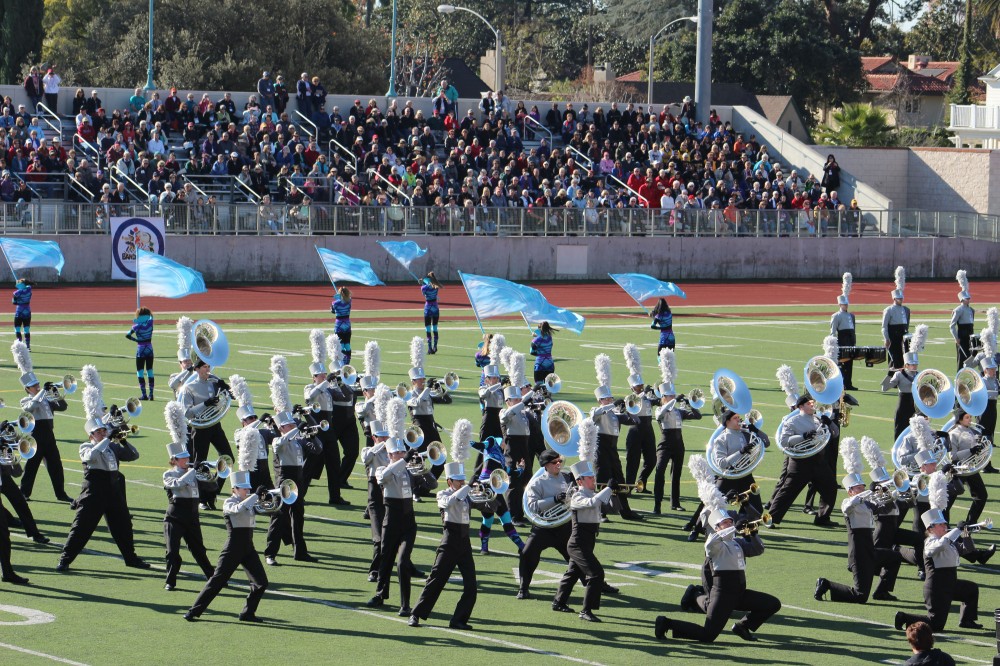 This group did some things I have never seen before. Very cool

The Virginia Military Institute had both a band and a piping team. They were my favorite 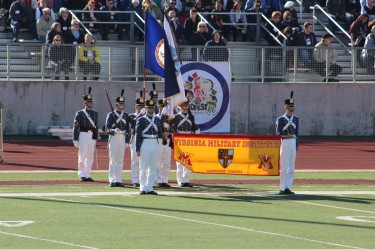 After the military group we walked back to the bus early.  We were in the direct sun and as the morning went on I went from coat to fleece to short sleeve shirt and was still very hot.  Plus I needed a little people break.  We were eating lunch on the bus (Panera Catering which was very good) as we drove from Pasadena to Simi Valley and the Ronald Reagan Presidential Library. This is by far the biggest presidential library in the country (made possible by generous contributions from Boone Pickens) and has an entire Air Force One plane inside of it, as well as Marine One and a presidential limosuine. It really was impressive, plus they had a special Christmas tree exhibit (with themed trees for each country President Reagan visited) and a football memorabilia gallery since he was such a football fan and was in a movie about Notre Dame. I liked the museum much better than I thought I would and absolutely recommend it (regardless of your political affiliations) if you are ever in the area.

Nice statue of President and Mrs Reagan you could pose with 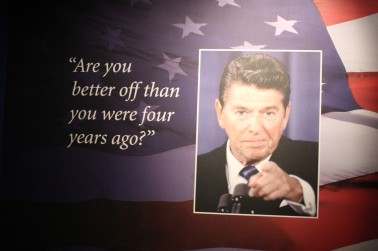 Arguably the slogan than won his first presidential election 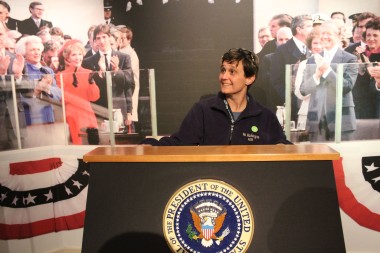 Couldn’t resist standing behind the podium

The outfit First Lady Nancy wore to the inauguration

Couldn’t resist standing behind the podium

The outfit First Lady Nancy wore to the inauguration

The suit he was in when he was shot.  The white circle (1B) is the bullet hole

And an x-ray showing how close the bullet was to his heart. I had no idea it was that close

I think everyone can agree with this statement 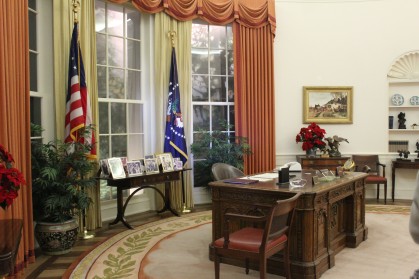 A complete reproduction to scale of his oval office along with the actual chair he sat in . Very neat

He was fond of western art 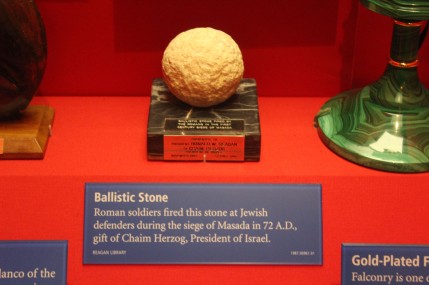 I loved some of the gifts he received while in office

Many of Nancy’s outfits. She was pretty tiny.  I like her taste in clothes.

The coolest thing was a complete Air Force One Plane. It was disassembled and reassembled here with the building being built around it.  See how the wheel is mounted on a giant pillar

See how the wheel is mounted on a giant pillar 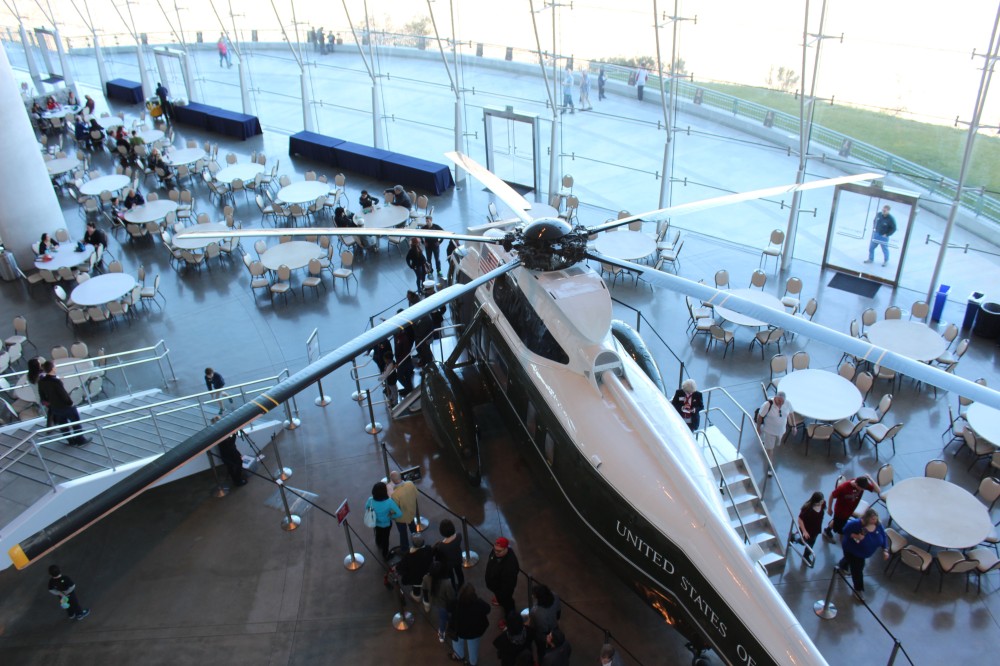 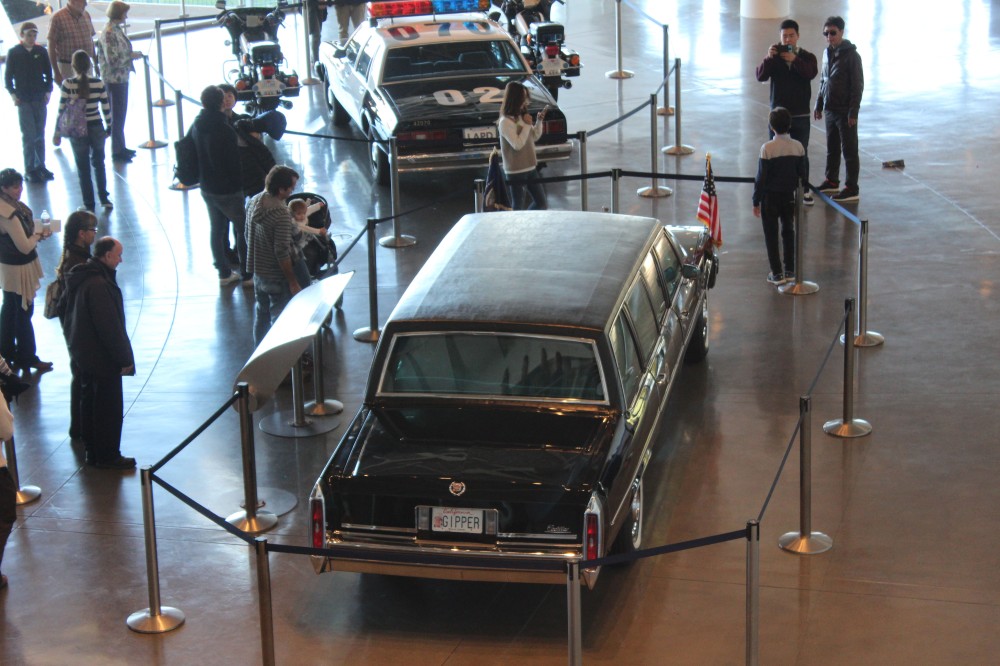 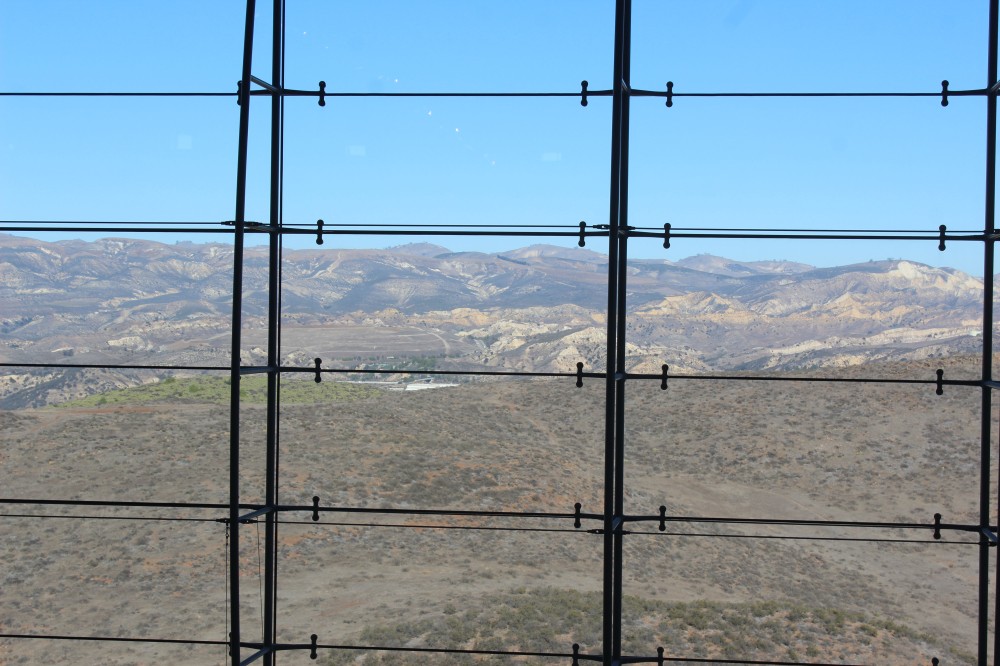 The line for Air Force One was pretty long, but that is what we wanted to see the most.  Even though they said no pictures, they let us take them as long as we kept the line moving.  Have to say it doesn’t look anything like what you see on TV or in the news.  Much smaller than I thought it would be.

The presidents chair used by Nixon, Ford, Carter, Reagan, Clinton, and both Bush 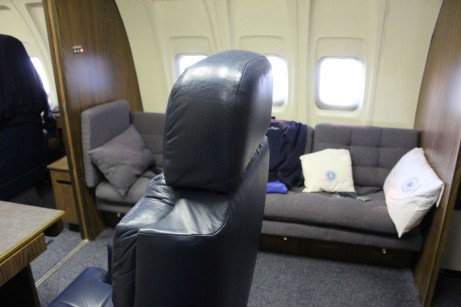 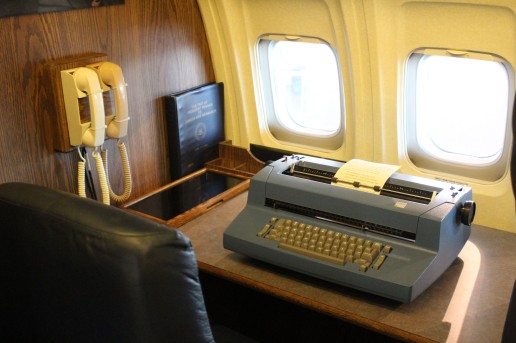 The very small galley even had its own white house dishes 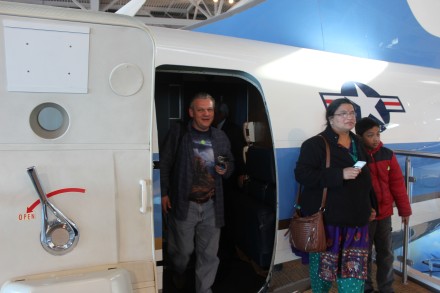 Lisa, who is waving, is our tour leader. She’s awesome

I really enjoyed standing on the steps of Marine One 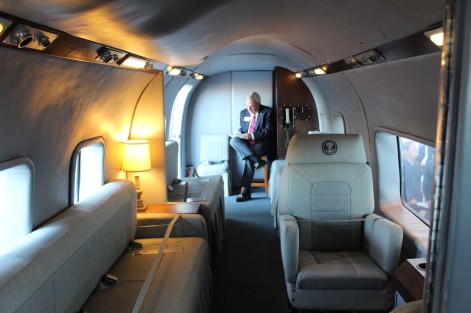 They had Santa flying the copter

With a marine standing guard 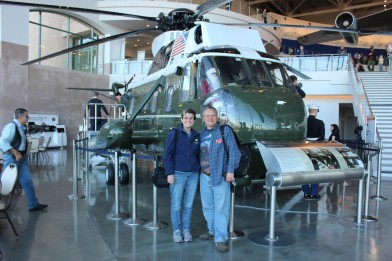 A very nice man took this pic of us

Next we had a little snack and then continued with the tour.  The building is three floors and built a bit like IKEA where you have to follow the path, but we did have plenty of time with our 4 hours to see everything we wanted.

I particularly appreciated that they included a timeline of the Iran Contra scandal. They didn’t gloss over the more negative aspects

One of the coolest rooms had several saddles and belt buckles

This saddle was gifted to him by Gorbachev. I wonder if he ever used it? 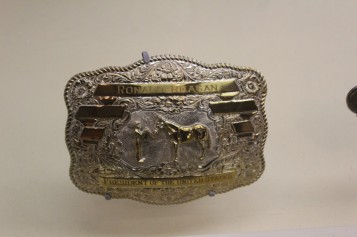 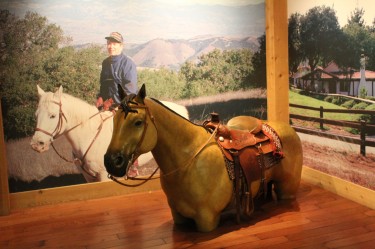 This full sized horse was great because you sat on it …

And could take a picture with yourself riding with President Reagan

It cracked me up that his Camp David jacket had his name on it!

The flag presented at his funeral

In addition to the regular library items there were two extra exhibits.  One was a Christmas tree themed with decorations from every country President Reagan visited.  I really enjoyed those and there was a football exhibit because he was such a huge fan and I loved, loved that.  They also had a very nice gift shop with lots of variety and although we didn’t buy anything they were doing a brisk business. 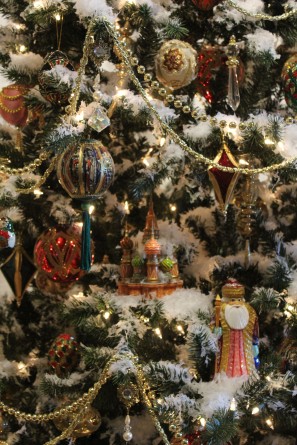 This one was for the vatican and was beautiful 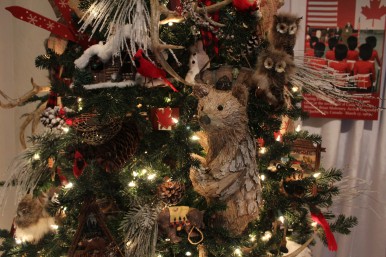 My favorite was this China one

Lots of cool Jerseys all worn in regulation play 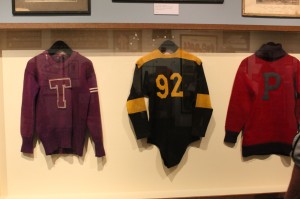 And a great collection of leather helmets

Ronald Reagan as he appeared in a movie about Notre Dame 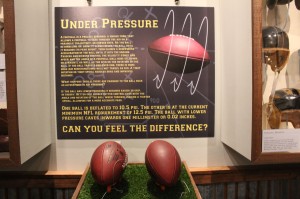 They even had a inflate gate demonstration area. I could tell the difference between the two inflated balls but it was pretty slight 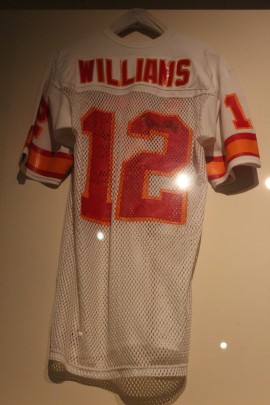 Doug Williams was the first African-American quarterback to win a super bowl and also the oldest at 44. I remember that game well

Doug presenting a Just Say No Jersey to Nancy

And here it is

I got chills when I saw this Marcus Allen Heisman trophy

The grounds are also very beautiful and since the museum is up on a hill the views are spectacular.  Plus he is buried on the property and you can visit the site.  This makes my third presidential burial site, the others being John F. Kennedy and FDR.  One of the people in our group, Harvey, has visted all of the presedential libraries except Herbert Hoovers and says this is by far the largest.

A piece of the Berlin Wall

The roses were still in bloom despite the chilly weather

Was not thrilled to see this sign..yikes 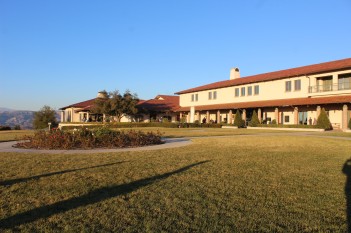 The back of the museum. Since it is built on a hill this is actually the third floor

The Seal on his grave

The back of the grave

And the front. It faces the setting sun

It was a long day, but a really cool museum and I am glad I went since this is probably not something I would have done on my own.  We hit rush hour traffic though and didn’t get back until 7pm so it was a 12 hour day.  So glad we have New Years Eve day off so I can catch up on some things and then the Rose Bowl Parade!!!!!

6 thoughts on “First Time at Bandfest and Ronald Reagan Library”