After experiencing the north part of the Lost Coast, we were very excited to see the southern part.  The weather unfortunately was not cooperating with a rainy forecast for all week, except Tuesday which was cloudy with a chance of rain.  Since this was our best shot at decent weather we got up early and headed to the coast.  This time we followed the easier route on our map, but at some point we made a wrong turn and ended up on another crazy, twisty road.  Lee was getting a little tense, because there was no cell coverage and the GPS wasn’t working right, but I said we aren’t lost so much as misplaced so let’s see where it goes.  The road was poorly maintained and through extremely dense forest, but suddenly we ran across an old gas station.  Weird right?  On top of a hill, in the middle of nowhere was this. 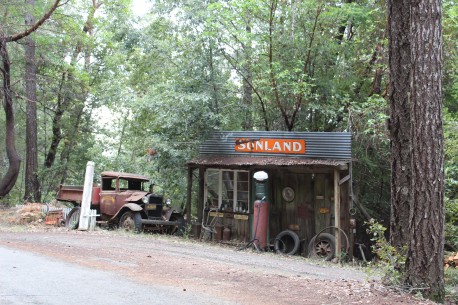 So of course I had to get out and take a picture and it looked so real I completely took it at face value.  Then Lee got out and walked behind and this is what he saw. 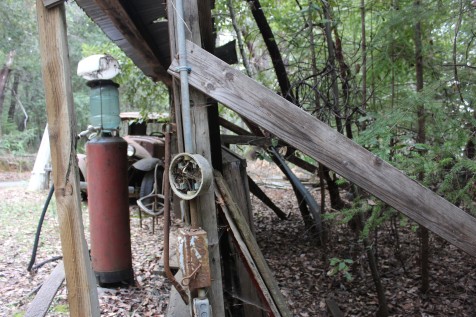 It was a dressed up set piece in the middle of nowhere.  I immediately started wondering if they had shot a movie there (the road would have been perfect for a bootlegger movie) and left the set behind.  Then less than 100 yards away we saw a sign for Marshall farm.  Now my brain was really cooking.  Penny Marshall, Gary Marshall? Unfortunately I have absolutely no idea because it isn’t in Roadside America and I couldn’t find anything on the web.  I will say the Marshall farm is a huge piece of land with some amazing views, but we never saw a big house or anything.  Well it’s a mystery unsolved, and we had fun with the rest of the drive which opened up and we got some amazing views.

Finally the road let out on a place near my map and we were back on course for Shelter Cove.  The Shelter Cove Road is not RV friendly.  Tons of switchbacks and it’s on the rough side, so I don’t recommend it unless you have a second vehicle.  There is a turn off that says for RV’s and trucks but we didn’t take that route so I can’t really attest to how it is.  There is only one place to get gas or groceries in Shelter Cove and we stopped to pick up some bread for sandwiches.  Unfortunately all they had was fancy artisan bread (northern California is a bit health food crazy), but I did enjoy the cat on the counter when we walked in.

Lee was horrified gas was $3.09 a gallon. Luckily we tanked up before the journey

Kelly thought you would enjoy this, made me think of you

After stopping we continued to travel down the VERY steep road and finally made it to Black Sands Beach.  Black Sands beach was really pretty, looked like something from Hawaii, but unfortunately we couldn’t figure out how to walk down from the parking area.  So we took a couple of pictures and moved on to the next place on our route. 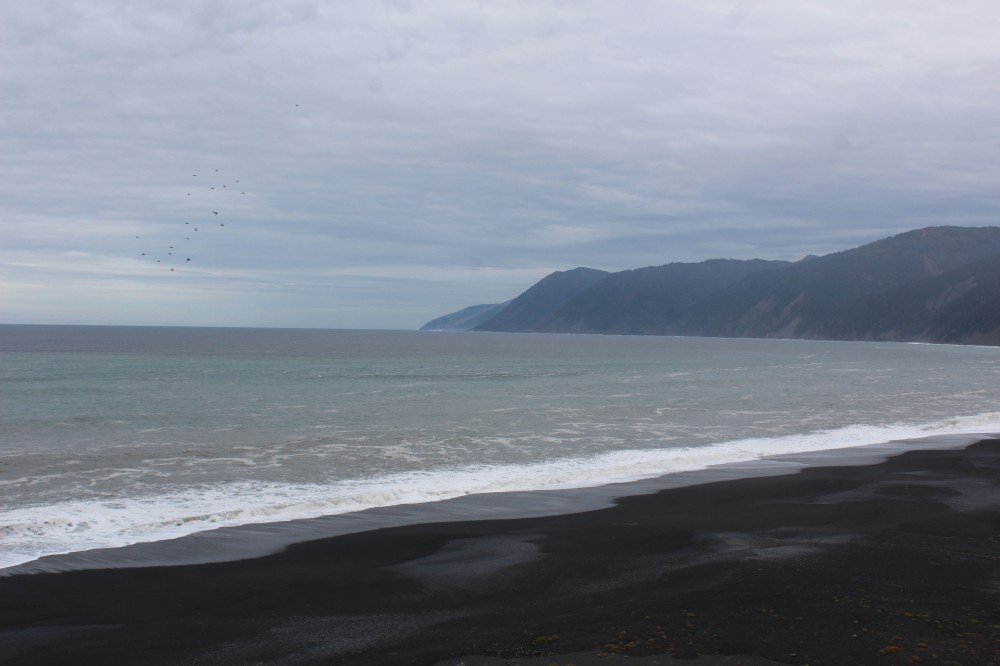 Our next stop was Abalone Point.  There are 4 nature conservation areas along a loop in Shelter Cove but they are not that easy to find.  The parking in all of them was very limited, so I would definitely recommend visiting during the week if you are able.  On an overcast Tuesday, we had most of the spots to ourselves which was nice, but it was tricky getting the truck in and out of a few of the spot.  Abalone Point had a couple of picnic tables and a dog area.  The view of the rocks were great with wild surf, tons of birds and even a little sea cave. It was windy though, so bundle up and they have built houses up all around it, which was a first for us in this area. 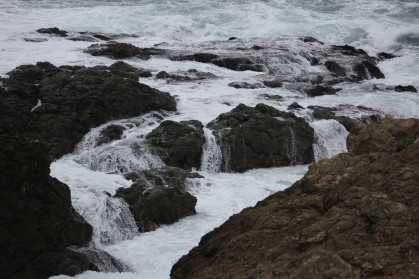 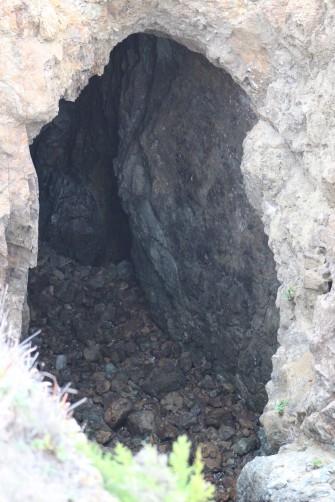 Next was Seal Rock and we were thrilled to see Harbor Seals on the rocks.  They had positioned themselves to stay out of the water on both sides and seemed to be enjoying the limited sun.  Lee got really good at spotting them in the water, and we got to see one slide into the ocean (using the waves to its advantage) and then climb back up which was a first for me.  We stayed there for quite some time watching them and got some great shots, many of which were Lee’s.

They really blend in while in the water

This was my favorite shot…Lee took it 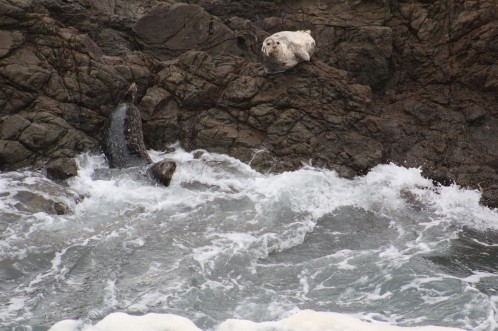 Seal going in the water

Starting to climb back up

Rested here waiting for a big wave to help push.  See how the flippers are spread out 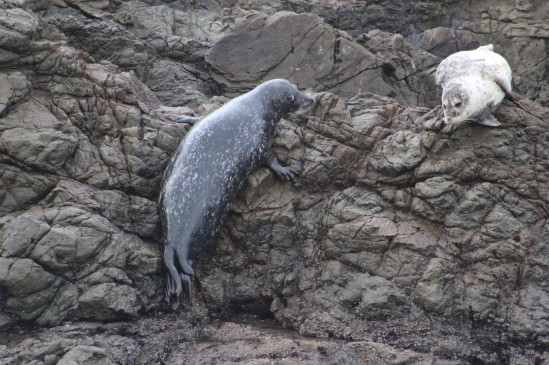 The last bit was done with just the flippers and some wiggling.  The look on his face is like ..”Dude, I’m climbing here.”

Finally, we move on the Mal Coombs Park, the last stop on the loop.  Mal Coombs has a lighthouse and a really cool man-sized statue along with great views.  Across from it is the marina and the only RV Park in town (so their must be a way for RV’s to get down here) and another grocery store.  It was still very windy and cold and I was not looking forward to eating my cold sandwich in the truck, when I saw they had a glassed in room with picnic tables for their customers at the RV Park store.  We went in and they had a full kitchen and were doing quite a little business.  On the spot I asked Lee if he was ok with eating their and so for $20 we got fish and chips (The Atlantic Cod was excellent) and Clam chowder in a bread bowl which we shared. We had our own drinks and the little room was empty while we ate in it, which was nice. I will mention here that we are trying to take lunches on these day trips, but sometimes the circumstances don’t give us a great place to eat them.  Since lunch is always cheaper than dinners, I don’t mind buying lunch out as much and we usually find something local and inexpensive.  But I do wish we had this lunch thing more under control.  WE are working on it, keep tweaking, but neither one of us is crazy about a cold lunch to begin with and a cold lunch in yucky circumstances…not so great.  After we ate our lunch we drove down to the boat launch near the marina and it was really beautiful down there.  We were out of the wind and got to watch a cute dog named Callie run and fetch a ball out of the ocean.  She was beautiful and having a good time.

Beautiful view, and I do mean Lee’s butt 🙂

At the boat launch

Callie having a great time

It was still pretty early when we finished the loop, so we decided to give Needle Rock a try.  It is in the Sinkyone Wilderness State Park and one of the rangers at our station had mentioned that a herd of elk hung out around the ranger station.  So with some directions from the RV Park camp hosts we headed out.  I cannot even describe how challenging this road is.  It is dirt in a lot of places and very bumpy plus too narrow for more than one car in all the spots.  The right side is a sheer drop down into some very tall trees and I wouldn’t even look that way when we were driving.  I tried to take a couple of pictures and Lee even mounted a Go Pro camera on the truck but nothing really captures it.  All I can say is be prepared and the drive is so so worth it when you get to the end.

The road, it’s worse than it looks. 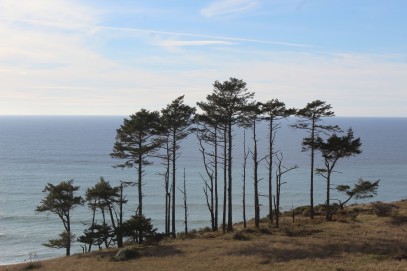 When the road opens up this is what you see.

They have several “hike in” campsites along the water

Cool tent that fit on a car

And bonus, as we were driving in Lee saw an elk.  When we stopped and got out there was a whole family of them, moms and babies, and they let us get pretty close.  What I read later was after mating season the harem kicks the male out so the females and the babies can focus on bulking up for the winter.  The males hang out in small groups by themselves. and we didn’t see any of them, but the ones we saw were really amazing.  These are my first elks in the wild and they were really beautiful animals. 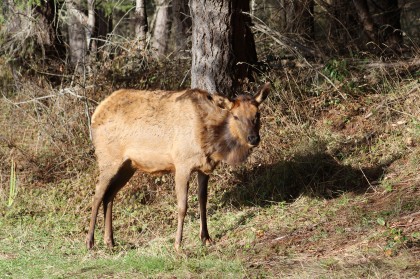 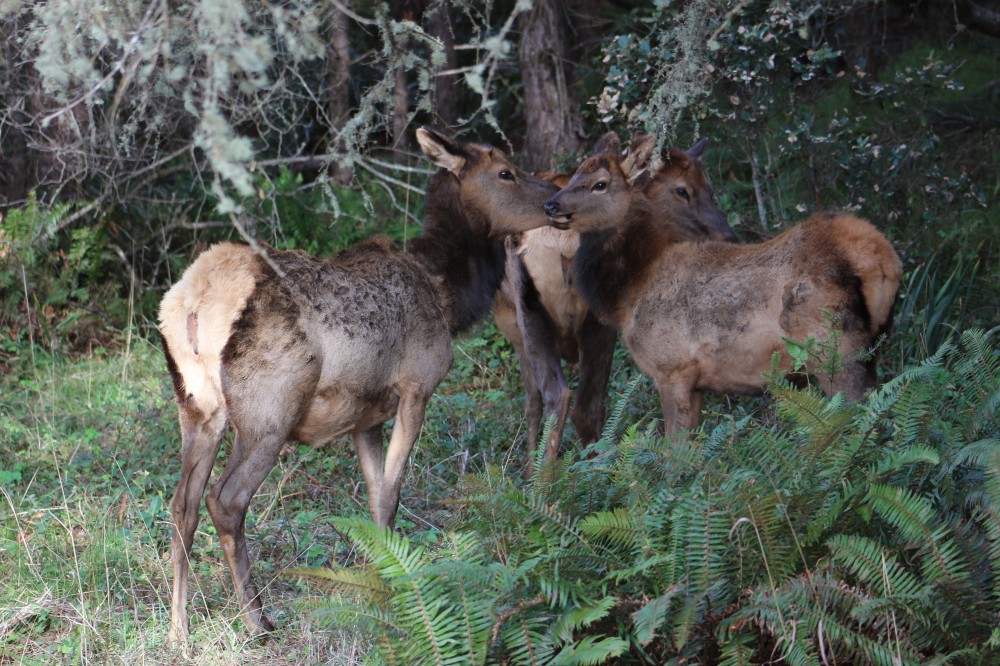 So we finally made it to the camp host cabin/visitors center and introduced ourselves to John and Susie the camp hosts.  He is a retired Forest Ranger and they stay here some months for a vacation from their sticks and bricks.  No cell, TV, or internet but the front yard view is amazing.  Really nice people and the little cabin in the back  half of the visitors center was nice.  The only communication they have is a CB radio and they have gotten trapped back there when there are mudslides and had to dig themselves out, but they seem to love it and I can totally see why. 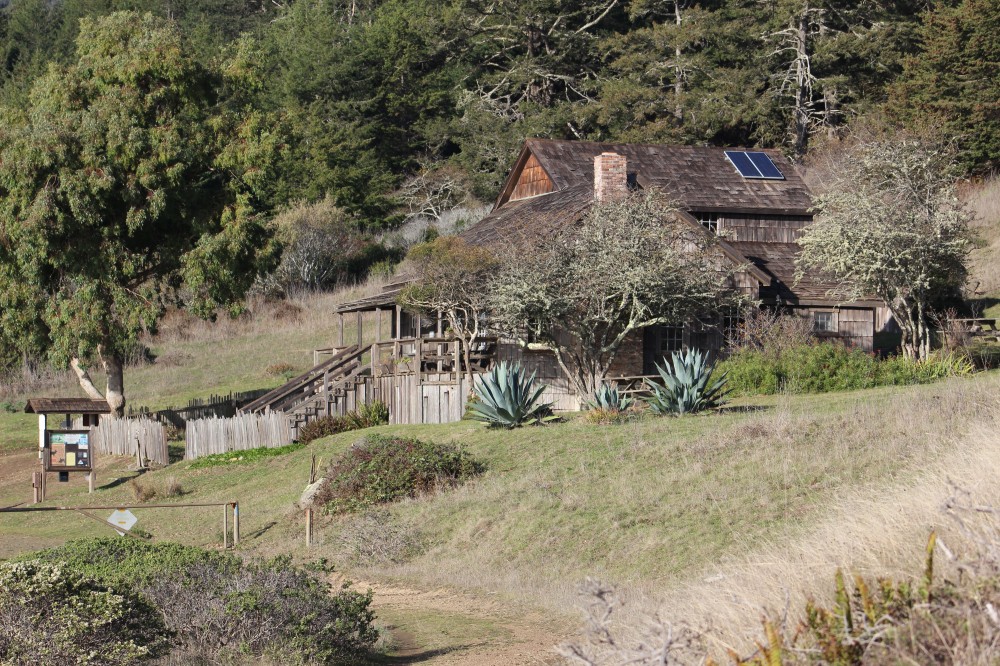 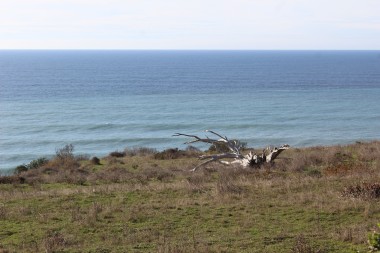 The camp hosts  front yard, not to shabby

After talking to them we walked down to the big tree and took a few pictures. It was huge. 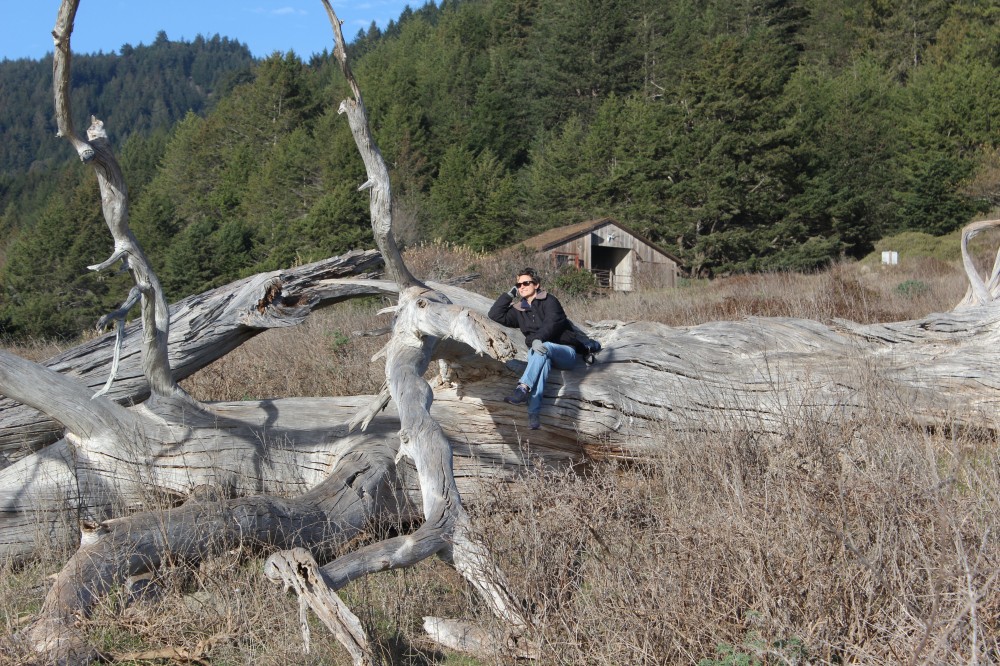 And finally we made it to the cliff.  I was impressed by what we saw on the north side of Kings Range, I enjoyed black sands beach, but the area near Needle Rock may be the most beautiful coastline I have ever seen and that includes a helicopter ride in Kauai.  Seriously so beautiful that if we had brought a tent would have pitched it and spent the night. And I am really not a tent kind of girl.  Plus there was much less wind and  the sun was completely shining.  So,  I sat on the ground and  watched the ocean for a really long time. 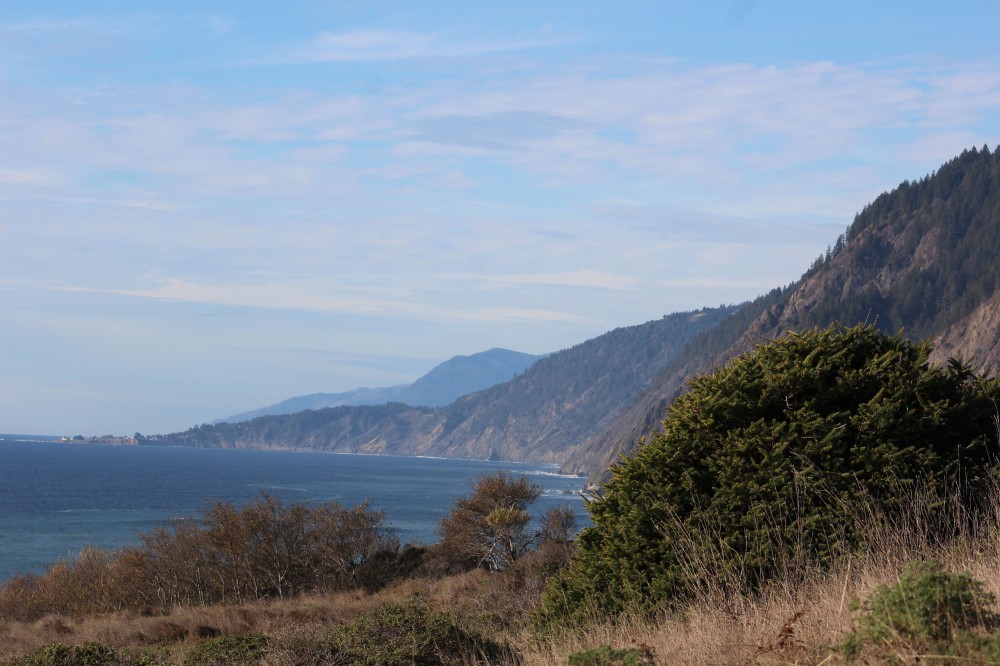 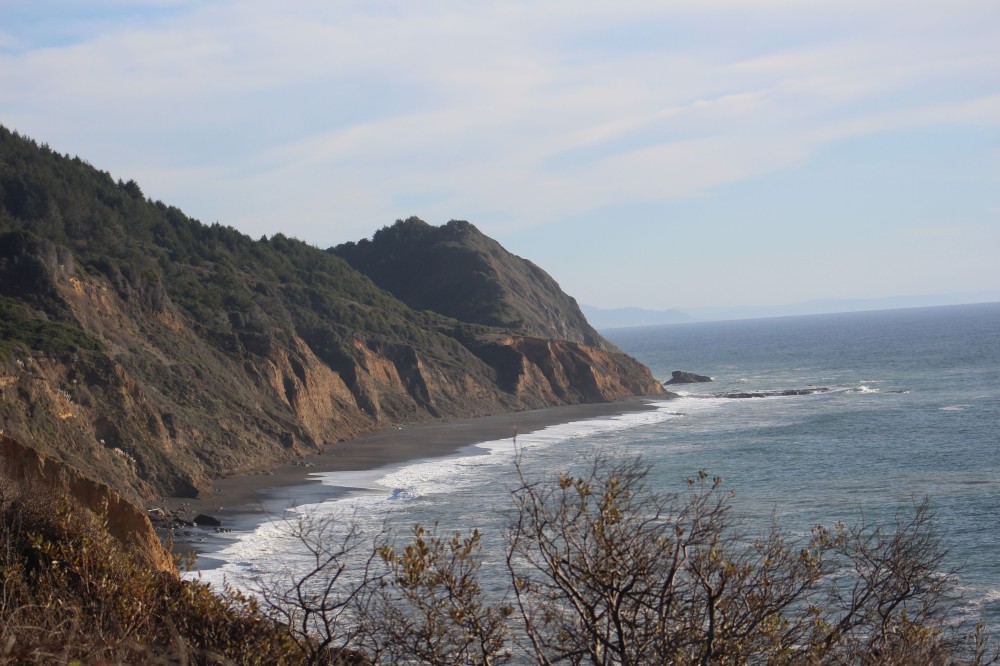 This rock has tons of pelicans on it

So here’s my advice.  If you do nothing else, make the drive to Needle Rock.  Yes the road is rough, but nothing a couple of Advil the next morning won’t cure, and even if it isn’t the prettiest coastline you have ever seen, I will bet it’s right up there with your favorites. Plus elk!!

Here’s a video of the road shot with out Go Pro when we left. The drive out took about 16 minutes, but the video is sped up 600% so it takes about two minutes. Because of the Go Pro’s super wide-angle, even the video doesn’t really show how narrow the road is, and how tight the turns are, and how the ground just drops to nothing at the edge, but sped up it sort of gives you an idea of how scary it is.