I was very excited to go to Eureka.  First, the name is super cool, we would be out of the forest and in the sun,  and would get to see the Pacific Ocean!!  Sometimes though, the little towns aren’t what you would expect, and this is a great example of how to salvage a day.  Because it rained on Tuesday we delayed our Eureka trip to Wednesday and the weather did not disappoint.  Once we were outside of the redwood groves it was a beautiful cloudless day and I was soaking up the sun. Not only are the groves dark because of tree cover they are often very misty, it can be a bit like living in a cloud.  Great for the skin after the dry air of Susanville, but it can be a bit gloomy.  It usually burns off by noon and then we get a bit of sun through the trees until about 4pm when it starts to get dark. What’s funny though is as soon as you leave the groves it’s totally different weather.  It turns out that the trees themselves cause the mist, with a large Redwood putting over 500 gallons of water into the air each day.  Very cool fact, and certainly allows the lower plant life to thrive, but as you can see from the picture it can be a bit intense.

Taken from the road right outside our grove around 10am

So we enjoyed the drive (about 50 miles) to Eureka, but when we hit the town itself were a bit shocked by the traffic.  I had forgotten the day before Thanksgiving is a school holiday and a big shopping day, and the town was packed.  The fact that there are one way streets everywhere did not help, and we had a bit of trouble navigating in the big truck.  Lee was a good sport about it though and eventually we found our way through town and to the Pacific Ocean.  I used the Roadside America app to see what was cool and unusual in town and found a memorial for a sunken submarine right on the ocean.  At low tide you can see remains of the USS Milwaukee, but since it was high tide we just saw the small memorial rock.  Great place to access the beach though, and we walked out and onto the sand.  It’s very different than the Atlantic Ocean.  Deeper sand, foamier water, and bigger waves.  Plus, unlike Florida, the prime beach real estate was completely undeveloped and there was actually a lumber yard and waste facility plants across the street…weird.  Still the waves were beautiful and despite the cold wind it was a lovely, sunny day. 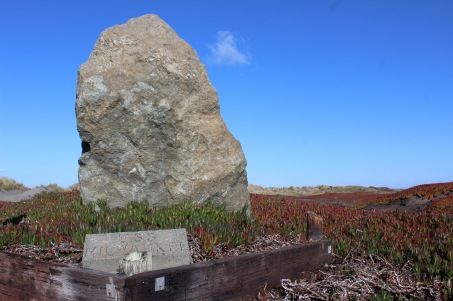 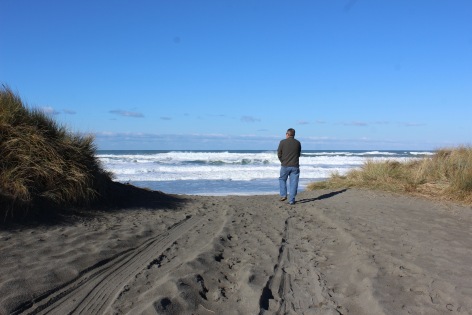 The dunes were great

I put my foot on this sand and it sunk up to my ankle. Walked carefully from there on 🙂

After the beach we were excited to explore the town and drove back to see old town.  The old town area is reminiscent of a little San Francisco and is along the harbor water. There are tons of cute and unique local shops and in season I am sure it is great with carriage rides, a trolley, and walking along the waterfront.  This particular day though it was crowded and since I am staying away from window shopping if there is nothing else to look at, we gave it a pass.  I like going in little shops if we can also walk and see historical attractions, houses etc, but for my sanity (and the budget’s sake) avoid shops if there is nothing else.  I think in season we would have walked around, but on this particular day we gave it a pass.  By the way, Lee is absolutely the perfect husband when it comes to shopping.  He is perfectly willing to spend hours walking in and out of small shops, I am generally the one who loses patience with it if the circumstances aren’t just right.  His step-dad Denny is absolutely the same and one of my favorite people to go shopping with.  And I went shopping once in Vegas with one of his best friends Mark and we had a great time.  So ladies, there are men out there who shop and do it well!! They can add a lot to the experience.  Anyway, we gave it a pass but did stop and see another Roadside attraction in old town.  The Carson Mansion is the quintessential haunted house.  Disney actually used it to model his haunted house attraction after and for that reason alone it is worth seeing.  It is a private Club now but you can take pictures from the street and there is a little public path on the side that shows a great view of the marina and the bridge.  We loved it, and I think it is my new second favorite old house (after Stephen’s King’s home in Banger, ME) that I have ever seen just from the outside.  (For inside tours nothing beat any of the Vanderbilt mansions.  I have seen several in numerous states and none ever disappoint.  But this was a great find and I would recommend driving through Eureka just to stop and see this alone. 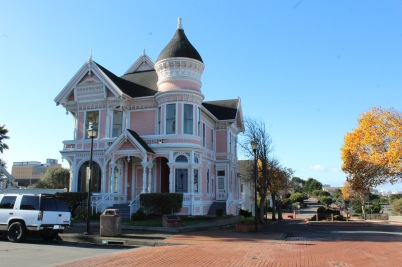 Road across the street has a San Francisco feel

The bridge crossing the bay

So far the day was going great but that’s when plans went a little awry.  I saw a Vietnamese restaurant when coming into town and was very excited.  Pure Vietnamese restaurants are rare and they have my favorite kind of Asian food plus they are usually very reasonably priced.  Unfortunately, the restaurant was closed for the holiday week and when we saw there was a second and navigated our way to it (with difficulty) it was closed as well.  So we made our way back up to the Wendy’s which was so packed we ended up driving through and eating it on the road.  So it was still quite early and I was running through my list pretty quickly.  Some days you find cool stuff and don’t even get through your list of things to see, but others you see them quickly and are like “now what?”.  I decided to swing by the zoo in town (smallest accredited zoo in the country) because Wednesdays are half price, but due to the holiday it was packed.  Next door is a 57 acre park with groves which we might have explored if there were less people but in both cases I asked Lee to keep driving.  I did get a quick pic of the kids playground though.  Loved the way the slide was built between two trees.

So now what?  The town was too crowded and all I knew was we needed to get out of town.  On the way up we had seen a sign for a federal wildlife refuge so despite not knowing anything about it we decided to stop on the way back.  We took a long about way out of town through some neighborhoods which was kind of cool and saw a fruit stand on the side of the road.  I asked Lee to stop and we talked to a really nice guy and got a sample of his Central Valley oranges.  AWESOME!!  So for $4 we got 2 oranges, a giant cucumber, and a red onion.  That cheered me up!

Then we decided to try the Humboldt Bay National Wildlife Refuge Complex.

What a wonderful find.  The people at the small visitors center were very nice and they have several paths through the marshes where you can look for birds.  Even off season we saw many and the walk itself was very pretty.  The wind was cold though so we only went halfway before turning back, but we were the only people there and it was just what I needed. 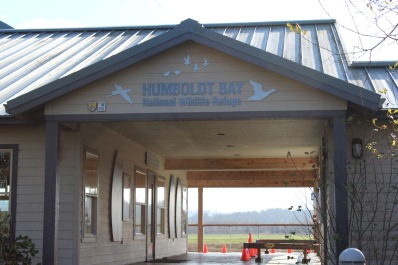 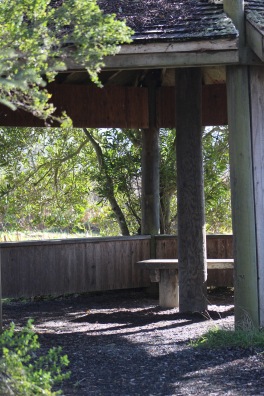 A few little huts along the way to watch birds from 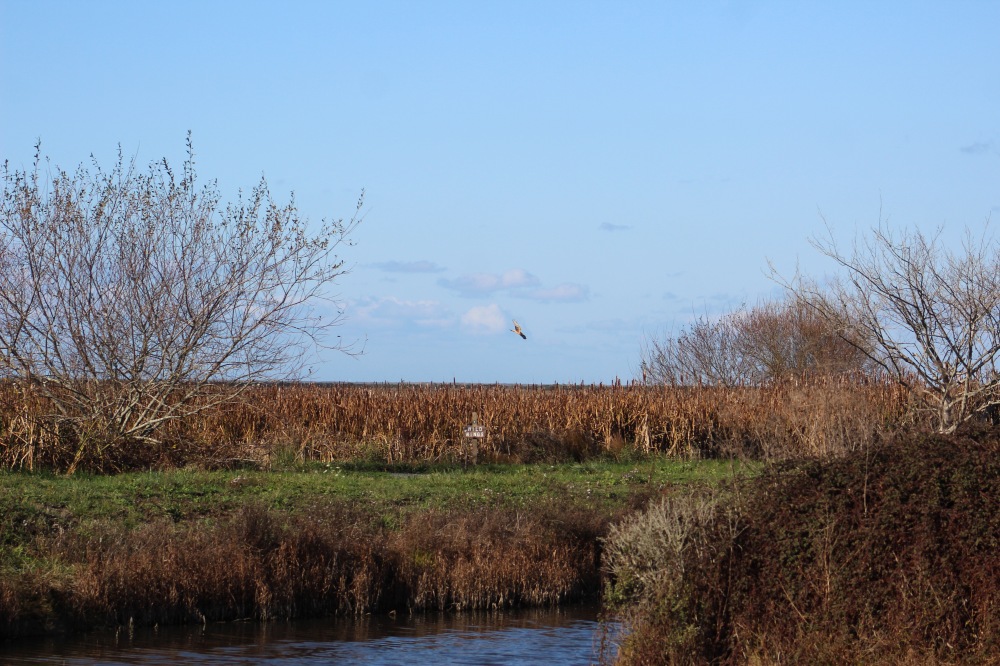 The vistas were amazing

Caught this bird in flight 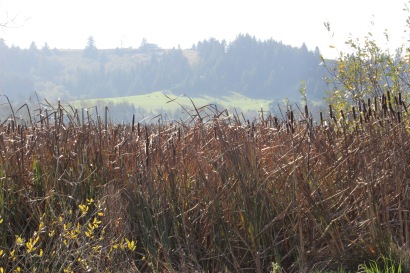 I loved the huge groups of cattails

Different landscapes throughout the walk

This big pond had groups of ducks in it 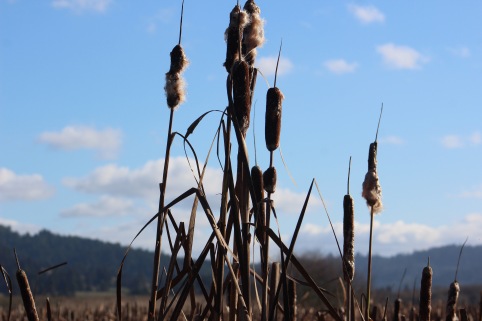 Great Egret hanging out by the visitors center

This bufflehead duck was a first for me.  Wish I could have gotten a better picture

After out very brisk walk we drove to the the other side of the park and checked out the Hookum Slough entrance.  Kayakers can launch from here (Deb you would have loved it) and there is a little island to paddle around.  Plus the entire refuge is bordered by Wiyot Reservation and their wishes have been incorporated in the management of the land which was pretty cool. As the literature states, they have been stewards of this land long before we arrived and I was glad that they were part of the process currently.  The refuge allows controlled duck hunting in part of the preserve and fishing in the waters.  I liked the combination of hunting/fishing and wildlife viewing.  It seemed like a very well run organization and since it was 100% free definitely worth a look. 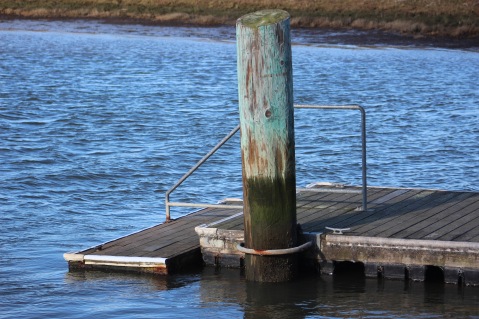 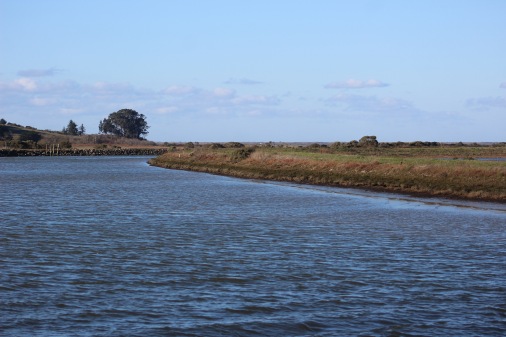 Beginning of the kayaking trail

Afterwards it was still somewhat early so on the way back we took one more quick stop to check out the Bear River Casino and Hotel.  Despite an unassuming appearance on the outside, the inside was very nice with many table games which you don’t always see in smaller casinos.  Plus as we were walking through I noticed a white slip hanging out of a slot machine.  You see these on occasion and usually they are for 3 cents or something, but Lee said check it out.  The slip was for $14.86!  We waited a moment, but no one came to claim it so I played it down to $10 on a penny machine and then cashed it in.  That paid for our lunch! Then we went across the street and checked out a coffee shop and the views were really amazing.  They are up on a hill and all the houses are very neat and clean.  Plus there is a huge community center and construction on the school.  That’s how it should be in my opinion.  Indian casinos are great, but some of the money should be going back into the communities and this was a great example of that.

So what started as a planned day turned into something completely different, but we still had a lot of fun.  Plus lots and lots of sunshine which we both needed.  Next up is the big Thanksgiving volunteer day.  We expect the park to be full and since we are the only ones working should be interesting.  Stay tuned!

8 thoughts on “First Time in Eureka!”