It’s been awhile since I have given an update on the RV-Dreams Dreamers Class of 2014, and since October marks 18 months since we all attended the rally I thought this would be a great time to do it.  Couple of reasons I like talking about what other folks are doing; first and foremost I think it clearly shows that this life looks very different for different people and that is completely OK.  Secondly, it’s an interesting case study because it is a relatively small group of people from diverse backgrounds who started this lifestyle at roughly the same time. Please keep in mind that these brief synopses of folks lives are my interpretation only and couldn’t possibly encapsulate their experience.  If they have a blog, I really recommend you check it out to get their whole story.

Jo and Ben – Traveling nurses, in their 50’s, who have been on the road for 18 months in an Arctic Fox fifth wheel.  They are on their fifth work contract and have worked in Maine, Virginia, Florida, Washington, and Reno. They lost Anubis their beautiful Shepherd mix this year, but still have a beautiful Malamute Peyton  who gets attention wherever they go. As a surgical nurse Ben has easily found work, but it has been a little tougher for Jo who works in home health and hospice.  To solve this problem they intentionally selected Reno as a place they could both find a contract.

Craig and Jo – Are in their late 50’s and have spent quite a bit of time with fellow RVers including several months with Kelly and Bill.  They recently had Jo’s cousin from Spain come and visit and enjoyed showing him the New York City area.  Unfortunately Jo and Craig have been plagued by continuous problems with their Lifestyle fifth wheel and after spending several weeks in Indiana having it fixed the company has decided there is a structural issue with the frame and is going to completely replace the entire rig. Good news; Jo and Craig get to custom design the rig.  Bad news; they have spent numerous weeks in a hotel (at Lifestyles expense)  waiting to get the repairs done.  I would love to say this sort of thing never happens but it absolutely does.  Lesson Learned, make sure you work with a reputable vendor and buy a good warranty.  Plus Jo is a strong advocate for their rights in this situation, as she has every right to be.

Eileen and Gene –  In their early 60’s they purchased a  second Winnebago when they realized they needed a little more space.  The space came in handy as Gene’s mom was living with them in the RV  until there was an opening in the assisted living facility she wanted to go in.  In addition to taking care of Gene’s mom they have kids all across the country and have managed to see all of them as well as attend Gene’s family reunion.  They logged a lot of miles in that first year but are slowing down now and really enjoying their time on the road.  Max, their cutie patooty cavachon is still with them and enjoying himself.

Lee and Tracy –  Are in their late 40’s and travel in an Open Range 386 FLR.  We have been on the East Coast from New Hampshire to Florida, up to Ohio, in Minnesota, Montana and now California.  Lee has done some work as an RV Tech but it has been more difficult than expected since we have moved so much.  He has also done some video work.  Tracy has been working in her corporate job the entire year, but just accepted a buy-out and will be  trying her hand at consulting.  They are currently doing their first work kamping job, volunteering at a BLM Day use park in California and next year will be about finding the balance between working to pay the bills and enjoying the lifestyle.

Cori and Greg – In their late 40’s Cori and Greg hit the road.  Cori converted her full time job to a part-time job at the same company and Greg has been actively building his RV Solar Solutions business.  They travel in a  Country Coach Class A which is the hang out place whenever we are all together.    They have been in the Outer Banks and spent most of the summer with Cori’s family in Texas.  Then they headed back to Pennsylvania for some family obligations and will be spending the holidays in Texas.  Cori has been able to work and travel on business trips from the road. They have found that they need to plan their routes in advance so they can publish their travel schedule in advance to schedule solar jobs, but are looking forward to more scheduling freedom in January.   They travel with Hobie their adorably ornery cavachon.

Debbie and Steve –  In their early 50’s, made a complete loop around the outside of the US and then spent some time with their kids back in California.   They are currently traveling with their son’s rescue pit bull Hurley who has completely changed my opinion of pit bulls.  He is an absolute sweetie.   After holidays with their kids and Steve’s dad they will be spending time in Arizona and Colorado.  They have been to so many cool places since starting I can’t even list them all, but they include Glacier, Yellowstone, The Tetons, and Zion.  Deb reads lots of blogs and finds amazing campsites.

Linda and Scott – In their early 50’s , they have been at a work kamping job in Texas helping to build a new campground.  Linda first worked as a nurse locally, then she worked from the RV processing medical charts, and she has also been working in the campground.  Scott is having a great time, which is why they have stayed, but they are planning on doing some traveling in January. They travel with two dogs and two cats.

Sue and Guy– In their early 60’s , they sold their house shortly after they went on the road.  They then bought a piece of property in Georgia and improved it so they now have three RV spots, which will give them a home base that their kids can visit.  After working on the property they went on vacation with some friends in Mexico and are now back on the road traveling the west.  They travel with Laci their super cute little terrier.

Bill and Kelly –  Kelly and Bill are  50, retired and living off their investments in their Landmark fifth wheel.  Most of their time has been spent on the east coast visiting family and friends and they have traveled between Pennsylvania and Florida.  Since the stock market is not doing so great, as many others they decided to take a work kamping job to supplement this year and will be doing a stint at Amazon.  See the first blog post about the experience here.   After the holidays and a trip to the Keys, they will be heading out west.  Unfortunately they lost their dog Cocoa and their cat Raskal, both long time family pets, this year.  They travel with their remaining cat.   Kelly wrote two posts on her first year anniversary thoughts, they are here and here.

Pam and Red – Pam and Red purchased a second fifth wheel,  a Grand Design Toy Hauler.   They have spent quite a bit of time in Arizona, Texas, and their home base in Arkansas.  They are fond of attending rallys and have been to quite a few. They have also made friends everywhere they go and spend quite a bit of time with other RVers.    They travel with three dogs who love the big porch on their new fifth wheel.

Eileen and Mario – Ellen finally retired and she and Mario went on the road.  They went to Sturgis, Glacier, and Yellowstone and plan on spending several months in Quartzsite.    As the last of the group to hit the road Ellen is making up for lost time and Mario is having fun with her.  They have no pets.

And there are also many other couples who were at a RV-Dreams rally and went on the road in 2014. Here are a few I have kept up with:

So what are the stats?  Please keep in mind my information is not perfect and these statement may be somewhat inexact but I believe they are mostly correct.

Definitely a lot of variation, which again proves the adage there is no one true way to RV.  Plus, it’s been really great watching other people’s journeys as they have made the transition.   Having this support system has meant the world to me, so I wanted to share some pictures of when groups of six or more Dreamers have gotten together along the way.  I know I am missing some of course, because I haven’t been at all the meetings, so if you have an update or a pic you would like to add please send it along to camperchronicles@gmail.com and I will be happy to update the post and/or add some pictures in. 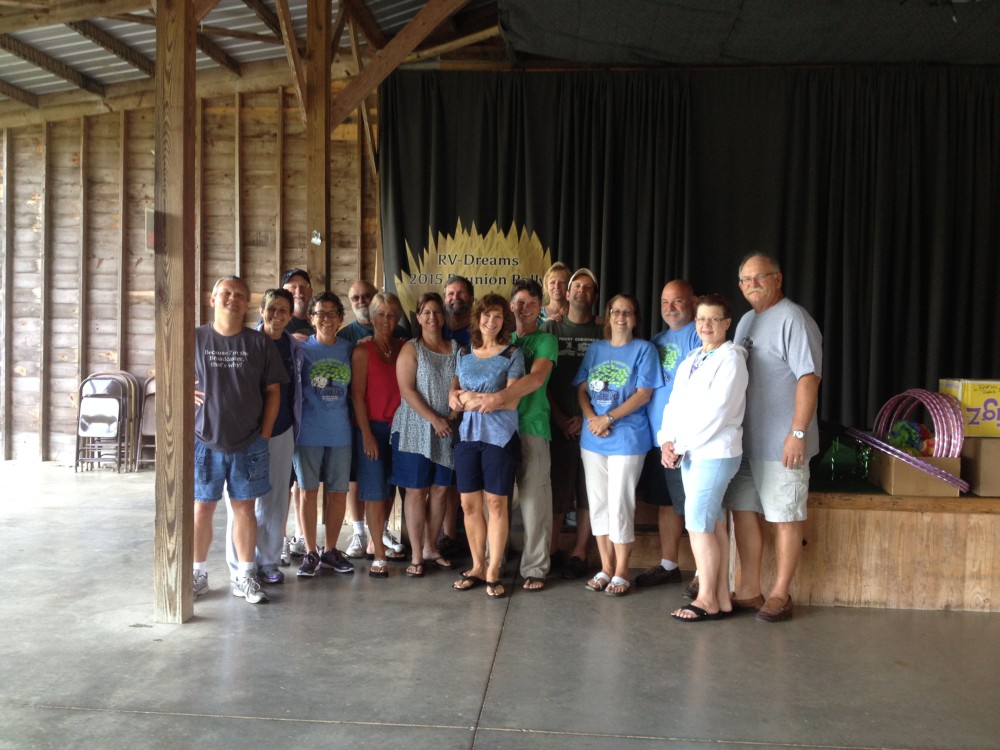