(To begin with, I thought this post should be called “Go West Young Man And Ferociously Hanging On To Middle Age Woman”. It has a certain zing to it, but I’m not the writer, I’m just the editor, and so I have no vote, and so you won’t be seeing that. Except for in this part that I just wrote. – Lee)

Finally, we are headed west!! When we started this journey that is all Lee talked about, and he has been very patient, or at least what passes for patient with him, with doing the stuff on the East Coast first that needed to be done.  For the first time Lee planned the whole trip by himself as well, which was great for me because it can be a very time-consuming process.  (I also dress myself, and do my own hair. – Lee) He used Good Sam Trip Planner, which is what Cori uses, and not only planned our travel days to coincide with some stops we wanted to make, but also found us very inexpensive campgrounds along the way. My contribution was to pull out the Roadside America app.  I absolutely love this phone app which shows you all the quirky and unusual things along your route.  It helps break up the long drive days and we got to see the World’s largest Buffalo statue, World’s Largest Sand Crane, and World’s largest black duck statue, among many other cool things.  Plus, it led us to the Enchanted Highway which is the mother lode of quirky and unusual, but more about that later. (That’s what we call, in the business, a “teaser”. – Lee) 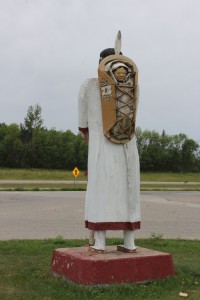 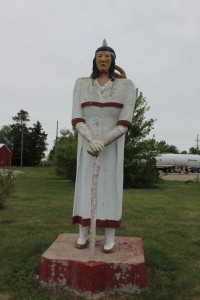 The mom looked cranky too 🙂

The cool think about slowing down or stopping for these attractions is you often find other neat stuff as well and a little history of an area.  Makes you feel more like you visited a place than just passed through. 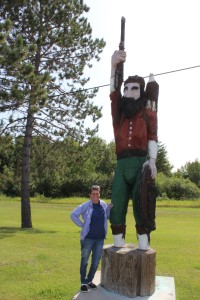 Basically, the travel days work out to be two long days, with two short days in between, and the first day ended up being 7 hours.  Thankfully Lee found us a wonderful campsite to stop at.  The non-designated sites were free and designated were only $10, and the place was practically empty.  All dry camping with no water, sewer, or electric, but the view of the reservoir was amazing and it was a great place to stop after a long day of travel. Paying was on the honor system and since we really couldn’t figure our what was designated and what wasn’t we just paid the $10.  Totally worth it.

Our view from the site 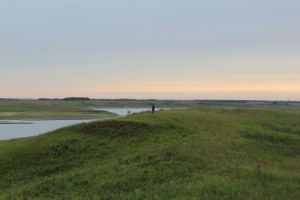 Lee checking out the view 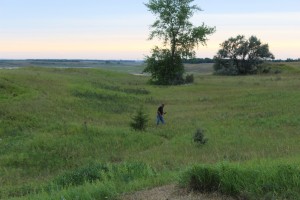 Then he picked me flowers on the way back…so sweet.

I think this is the first time Lee ever picked me wild flowers for me.  I think the West agrees with him.

(Again, I know I’m just kibbutzing here, but I really think there should have been several paragraphs about the wildflowers I picked, but alas, the “writer” didn’t see the need. – Lee)

The next day was a much shorter travel day since we were going to see the homestead where Lee’s mom was born.  She spent her childhood on a farm in North Dakota and we have both heard about it and we knew we had to see it.  Oh I should definitely mention that my new truck office setup worked great,  I used my MyFi box for internet and had strong phone and WiFi almost the entire way.  I actually had numerous conference calls, and did two presentations from the car and it worked beautifully.  If you want to see the setup link back to here.

On our way to Dickinson, our next stop, we had the added benefit of huge beautiful fields of sunflowers along the way.  I have been seeing pictures of these sunflower fields my whole life and was very excited to try my hand at taking some of my own.  Also, there were more roadside attractions and that’s always a good thing! (Notice how she’s taking her time and building suspense getting to the Enchanted Highway? Apart from leaving out things I think she should put in, and her atrocious grammar, spelling, and insistence on using emoticons, she’s not a bad writer. – Lee) 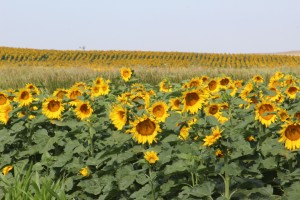 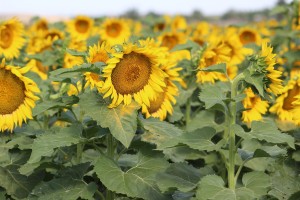 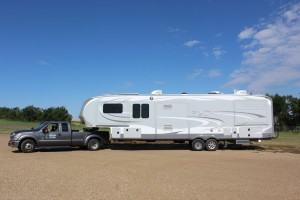 After stopping several times for pictures, we made it to the campground.  I have to admit after the previous night’s experience I was a little disappointed.  The train tracks ran right behind the campground and there was also industrial noise from a plant nearby.  Still at $15 it was fine for one night so we quickly dropped the trailer then took the truck back out on the road.  It took about an hour to drive from Dickinson to the farm where Lee’s mom grew up and I am so glad we did it.  We got to see the back roads of North Dakota plus Lee was obviously moved by being in the place his mother came from. (Nuh uh. A bug flew into my eye. Shut up. – Lee)

The remains of the house 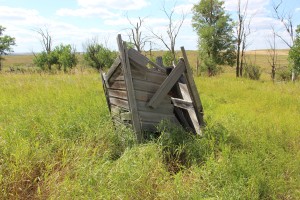 What was left of the outhouse..with it’s old wooden seat

Lee in front of the backside of the house

The barn and shed

Plus along the way we got to see some other cool stuff including Lee getting some amazing pictures of a Swainson’s Hawk who because he was startled from his meal of rabbit on a hay bale continued to circle the area and screech at Lee until we left.  VERY VERY cool and my first close up sighting of a hawk. 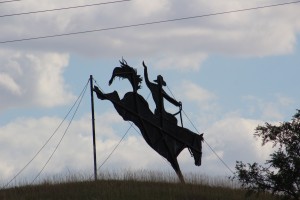 A hillside metal sculpture of a cowboy on a horse

A minion made from hay bales…Lee loved this 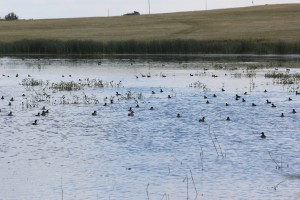 The hawk with it’s squirrel

It was not happy with us

And the best of the best (ah, finally, here we are….- Lee)  was that along the way we saw signs for the Enchanted Highway. The Enchanted Highway was the brainchild of a local teacher, Gary Gref, in Reason, ND who felt his town was dying when the local high school closed.  Although he was not a sculptor, he raised the money to create huge sculptures along the road leading from the highway to his town.  We love weird stuff so of course we were intrigued. and it was absolutely. positively, amazing. Depending on who would donate the land, the artist created sculptures all along the 32 mile stretch of road to his town.  Although the longest stretch was 12 miles, we kept going and the sculptures got better and better.  Each one costs him around $60K to make so it takes about 6 years to get the money and material together for each one.  It’s a true labor of love and for me an example of the American spirit.  But don’t let me convince you, I’ll let the pictures speak for themselves.  We spent several hours doing this and I loved every minute of it. (She’s not over selling it. It was just delightfully kitschy and all American. The sculptures are wonderful, and the drive along the road is beautiful. They are impossibly gigantic, and most of them you can see from several miles away, and each one has a sign telling you the name and distance to the next one. The whole road is 32 miles, and again, worth every minute. If you don’t do this, you’re a big dummy head. – Lee) 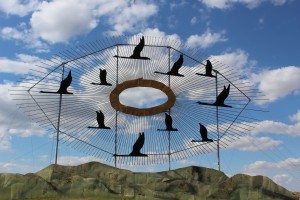 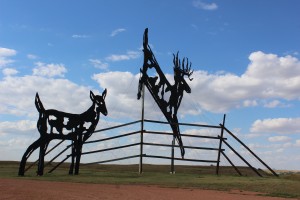 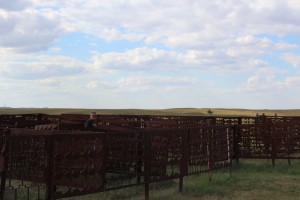 This fun maze was next to the deer

My favorite was the grasshopper 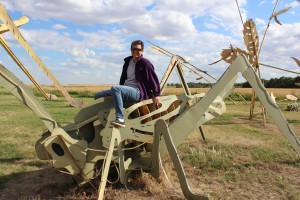 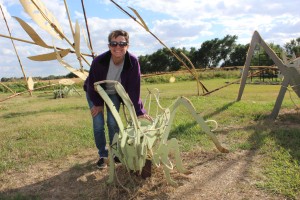 This one was called Fisherman’s Dream and was huge

Check out me in the bottom to show the scale 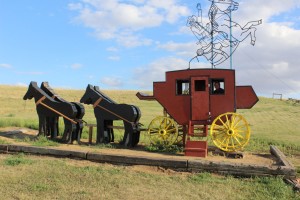 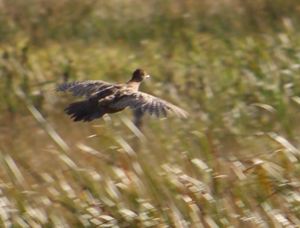 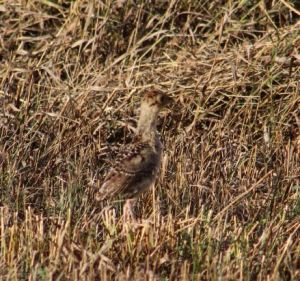 Finally we made it to the end and saw the World’s Largest Metal Family. This is what was in his mind the entire time because he thought people might drive 32 miles to see the World’s Largest something.  He was right…and I did…and it was amazing.  As a side note when researching links for this story I saw this attraction is one of National Geographic’s Top 10 Roadside Attractions.  How cool is that???? 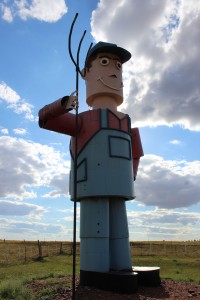 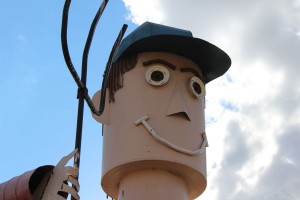 At that point we just HAD to see the town, which is of course the whole point, and stopped at the Enchanted Highway gift shop.  We went inside and a nice unassuming man got us some ice cream and a magnet.  Lee asked about the artist and we were surprised that it was him! He raises about $10K a year from the gift shop and the rest come from donations.  That’s why it takes him so long to do the sculptures.  Really interesting guy and seriously if you are ever in this area check this out, or you can go to his website and email him.  He’ll write you back!! And if there are any philanthropists out there, this guy deserves the help.  His next sculpture is a Spider Web and looks pretty cool!!

The gift shop with a metal Christmas Tree outside

Finally, on his recommendation, we went to check out the Enchanted Castle. Some enterprising people in the town had turned the old high school into a Hotel, Restaurant, and bar.  Again, American ingenuity and I loved i,t although the restaurant prices were too steep for us. 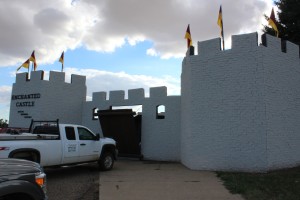 The school hallway with hotel rooms on the left

Loved that they left the gym 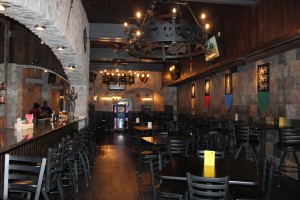 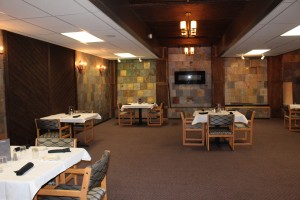 The restaurant was a nice steak house

It was a terrific day, but next up is Montana which we are really looking forward to!!

Beautiful sites with strong ATT 4G coverage.  No services but there is a dump station and several sites for people with horses including a corral.  $10 a night and there are some free non designated sites according to there website although we weren’t sure which ones their were so we just paid the $10.  Really beautiful and quiet yet close enough to the highway it was not far off our route.3749 114th Ave. S.W., Dickinson, ND

$15 a night for primitive camping and $25 a night for full hookups.  We stayed on the primitive side and the lake was beautiful but the recreation area was behind a train track and industrial area and there was quite a bit of environmental noise.   We booked online but the booth was unmanned because it was off-season and the signage was very unclear.  We called and the person who answered was friendly and directed us to our site. The sites were small and we actually had to move to 25 to accommodate us.  Fire rings are set behind the RV or on the wrong side.  It’s really designed more for tent campers and the site itself was more of a patch in the ground.  It was ok for an overnight but I wouldn’t stay here for any length of time.