When I researched the area last weekend I was particularly intrigued by the bear sanctuary.  Lee, as everyone knows, absolutely loves bears.  OK, I can’t even type that with a straight face because several months ago Lee decided to watch some bear attack videos and he’s been nervous about meeting bears every since.  (I do not love bears. Bears love me. Because I am crunchy, and good with ketchup. Only a fool would NOT be nervous about meeting bears. If you are a fool, feel free to go to YouTube and watch some videos. Or do a Google image search for bear injuries. Then come tell me how cuddly they are. – Lee)  Since he also really wants to get me out west into the wide open space where apparently bears abound, there is a bit of a contradiction here that we have not worked out yet. So I thought we would take advantage of the closeness of the sanctuary and check it out.  We had no idea what we were getting into, but at $8 per person the price was right and I expected to see a few bears.  Wow, were we underestimating the experience.

The Vince Schute Wildlife Sanctuary  had an interesting start.  During the depression Vince sold the family farm to start a logging company.  It became very successful, but they had a serious problem with local bears breaking into the cabins the loggers stayed in and stealing the food.  So, for many years Vince and his loggers hunted and trapped the bears.  In the early 70’s, tired of the killing, he started voluntarily feeding the bears in an area away from the cabin and although this drew bears to the area it kept them away from his men and their cabins. In 1993, at the age of 80, he became concerned about what would happen to these bears when he became too sick to feed them (you should never feed bears because when you stop they often become a “nuisance bear” and then must be killed) so he started a wildlife refuge.  There are no cages or fences here.  The bears come because they are fed every night and the population of bears varies depending upon the time of year and season.  Because of this they are only open between 5-8pm Tuesday – Sunday and don’t absolutely guarantee a bear sighting.

As I said, our expectations were low, but it was something we could do on a Friday evening, so after work we headed over.  The reserve is 13 miles outside of the small town of Orr, Minnesota, so it’s really in the middle of nowhere.  When you pull into the gravel drive there are numerous signs telling you if you see a bear on the road please honk your horn loudly at them.  The sanctuary uses negative conditioning to keep the bears off the road until you get into the sanctuary area itself.  It’s not much to look at, a small stand to buy tickets and a gravel parking lot, then you take an old school bus into the sanctuary itself, and the observation deck. 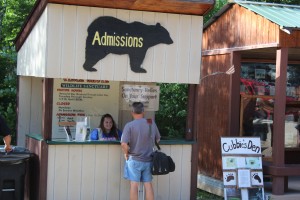 All of the staff were college kids doing summer internships. Many of them live on the property

The platform area itself is very nice, 12 feet off the ground, pretty large, with a nice gift shop in the middle. Lee decided to take his nice professional video camera just in case, along with a tripod, and that’s where we ran into a problem.  First, no tripods are allowed (only monopods) which makes sense because there were many children there, and it’s a tripping hazard.  Second, when Lee pulled out the professional grade camera things got weird. We were barely into the experience when the assistant manager came up and talked to Lee.  We were told that videotaping was not allowed. Once Lee assured him the camera was for personal and not commercial use, he finally allowed him to start shooting, asking only that we not shoot footage of the bears being fed, or how close volunteers got to the bears.  Just a minute or two later, the manager came out.  This young lady looked to be all of 21, and announced herself as the director of the non-profit, and she asked him to stop shooting, and explained that videotaping was not allowed. At this point I was getting annoyed, I wanted to see the bears.  I let her say her piece and Lee again reiterated we were not professionals, and finally I turned to her and said, “You do realize I can take excellent high definition video with my SLR camera?”  She paused and admitted she did indeed know that, and that she was fully aware that everyone around us was shooting video with their phones and SLR cameras, and even a few consumer level video cameras. Then she said somewhat sheepishly they had had some problems with naturalists coming into the sanctuary and taking videos and causing problems. Then she said she would allow it. As a side note, for $200 per person you can pay to go down on the grounds with the bears and have a private tour. Not sure I would pay for that, seems like it’s a bad idea all around, but the option is available.

I know many people are purists when it comes to wildlife and I respect that, but I will take a moment to tell you where I come down on the issue.  Anything that inspires people, children in particular, to respect wildlife and that does not hurt the animals in any way is a good thing.  I listened to more than one kid start the experience by asking grandma if they could play a game on their phone and then actually stopping and watching as the bears started to get more active and feed.  This is the next generation, and unless we want our wildlife to be reduced to pixels on a screen we need to find a way to capture their imagination.  I think the sanctuary did a nice job of that.  Just my opinion, your mileage may certainly vary.  Plus, selfishly, what a tremendous picture opportunity!  We both had a blast taking pictures and shooting videos.  I took over 300 shots and I am going to share some of my favorites with you.   It was really fun, the price was right, and as you’ll see, the bears didn’t have a problem with the deal.  I highly recommend it if you’re ever in the area. 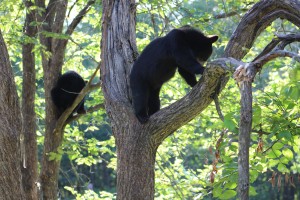 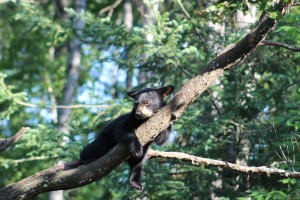 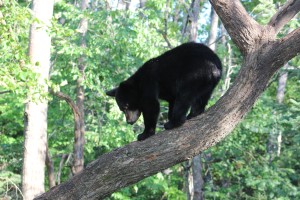 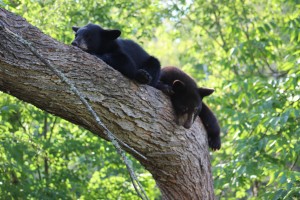 The cubs were so so cute about 7 months old 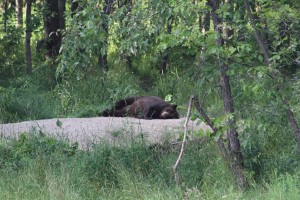 Big bear sleeping on a rock 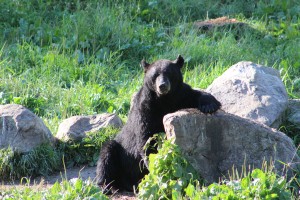 Bear staked out his feeding station 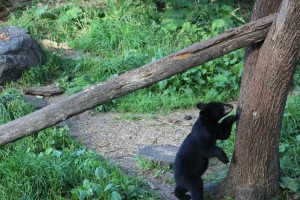 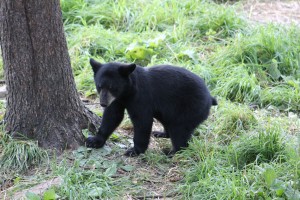 This little guy was my favorite 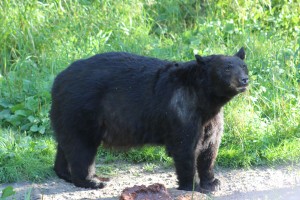 Just in case you think they were all cute and cuddly 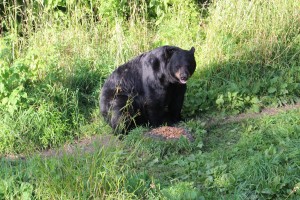 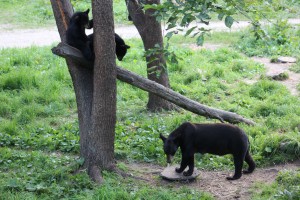 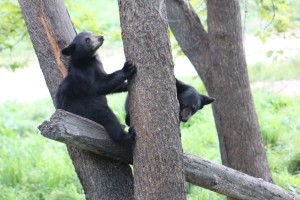 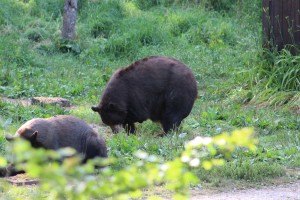 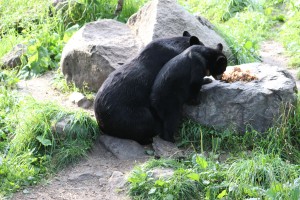 Mom and her cub 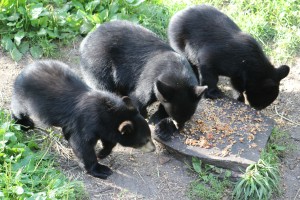 The little guys were good sharers

We stayed for a couple of hours and the bears were active so we got tons of great pictures.  With that much time and closeness you could really play with the shots and get a little creative, which I appreciated. Plus, did you know more people die from potato salad each year than black bear attacks? That was an interesting fact and one I can believe since I’ve had some pretty yucky potato salad in my day. Seriously though, don’t feed bears.  Use noise for negative reinforcement.  They used air horns in the parking area and I think I may get one for Glacier.  And here’s a link to their website with lots of great how to live in bear country information. 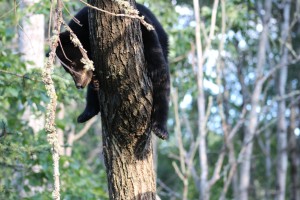 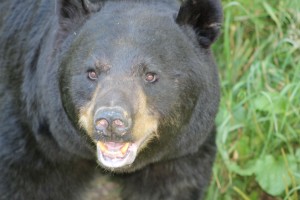 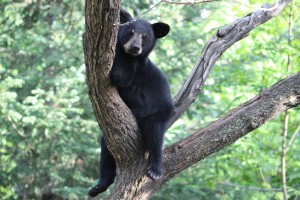 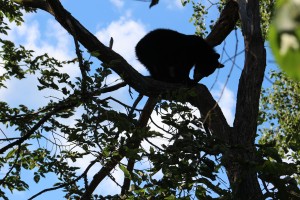 So from a photography standpoint I was feeling pretty good about myself, but then we got home, and Lee took this amazing picture (with my SLR) of the Blue moon.  You can even see the craters on the right hand side for heavens sakes…ahh well, I guess I need to keep practicing, but as Lee said, “It was a perfectly lovely day.” 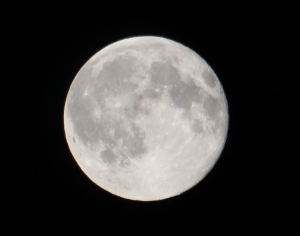 5 thoughts on “First Time at a Bear Sanctuary”