Saturday Linda and Howard had to finish up their hours at the farm, so Lee and I decided to explore the area a bit. (This has nothing to do with me talking to Howard for hours. Clearly they slacked off on their own time. – Lee) Usually I come to a new area with a list of things to do, but with the wedding I didn’t have any time to research.  So I really wanted to get oriented.  Linda had recommended the Kabetogama Lake Visitors center so that was our first stop.  Mike, the ranger, was extremely nice and I really liked the center.  It had lots of good information, some exhibits, and a cool place for kids to learn.  Plus I got a Voyageurs National Park T-Shirt for $15…nice quality and a good price! (Plus she looks really hot in it. – Lee) 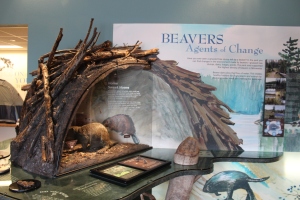 This beaver exhibit was pretty neat and educational. Later I saw an unusal beaver dam and recognized it because of this display.

Next we decided to visit the nearest town Littlefork (pop 641) and check out the hardware store and grocery store.  Little Fork is the home of Jackpine Savage which according to the urban dictionary is “A person descending from northern Minnesota’s iron range that does all things to satisfy their instantaneous desire. They can be found wearing winter boots year round and carrying multiple guns.”  Might be why they had this statue downtown next to the hardware store.

Oh yes I sat on the chair!!

Polkinghorne’s Hardware (the home of Hardware hank) was great.  It takes you back to a time when hardware stores provided a little bit of everything and this one did not disappoint.  We spent at least an hour wandering through the store and ended up spending about $80 on some reasonably priced items that both filled a need and helped support the local economy.  The local grocery store was small but had most of my favorite items and the prices again were not bad considering. Plus, the staff at the grocery store, J&D Family Foods,  was incredibly nice and even walked our groceries out to the car for us.  Haven’t seen that level of service in a really long time. My only disappointment was the local liquor store which is really 2/3 bar and a tiny liquor for sale area.  They call them On & Off stores up here which I have never seen and unfortunately their selection was really teeny tiny. Tried to buy a bottle of Cabernet Sauvignon there for Linda but they hardly had any wine.   We liked the town though, wide streets, just a few shops, and although it was small it was very neat and tidy. (It was a Saturday, right around noon, and the place was like a ghost town. No sound at all. I felt like I was in a Twilight Zone episode. I like towns like that. – Lee) 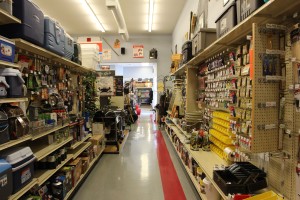 Grovery store carried a little bit of everything 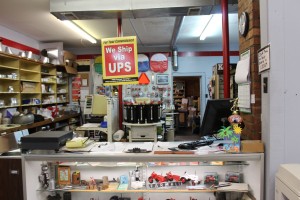 Had key cutting and UPS shipment in the back 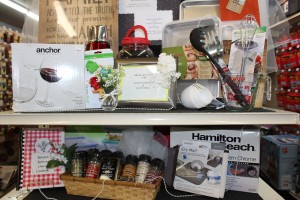 I loved this bridal registry, no high tech here just a display (Check out the grooms last name, I wonder if she’ll change hers) 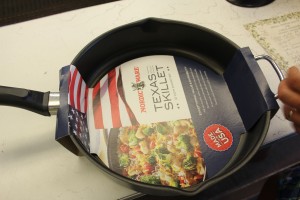 It was nice wandering around a bit and on the way back to the camper we stopped and saw Moose Lake.  The picture absolutely does not do it justice as it is a perfect round little lake.  Unfortunately we didn’t see a moose in it, but I absolutely could picture what it would look like if we had. (There was a moose, I think he was scuba diving. – Lee)

Sunday was the big day though and we were going on a hike with Howard and Linda.  I was a bit intimidated because H&L are VERY experienced hikers, but Howard picked a moderate hike for us that had some amazing views.  I had told him I don’t like to hike for the sake of hiking, for me I like to get to the end and see something and he picked the perfect spot.  Also Linda had brought an extra set of hiking poles along so I could try them and after the initial awkwardness they really did help my back not to hurt.  For the first time I carried a backpack (Lee carried the camera as he shot video along the way) and it was packed with many of the items Linda had recommended.  I had a small first aid pack, some snacks,  a light lunch, and following Linda’s example a “pee pack”.  A “pee pack” is basically a ziplock bag with some wipes if you have to pee along the trail.  I’ve never carried one before but it made a ton of sense to me, so the pee pack is now standard hiking equipment.  It’s really great hiking with experienced people because you learn a ton.  Linda talked me through several “rough” spots on the trail showing me how she used her poles to balance and both Howard and Linda pointed out little things I never would have seen like the remains of a pine cone a squirrel ate, raspberries, and juniper.

Linda showing me how to use the poles

As my sister says I am stylin lol

Howard says these aren’t blueberries.  They are blue and look like berries I don’t get it 🙂

I followed closely behind Linda watching what she was doing

Linda and I taking a break on a bench

Although Linda and Howard significantly slowed down their pace, it was still pretty brisk for us and the 91 degree heat was not helping.  I haven’t sweat that much in a long time, but I was determined to keep up and get the hang of this hiking thing.  Early in the hike (when I still had breath to spare) I told Linda how disappointed I was that we hadn’t seen any eagles during our time in Minnesota.  She was keeping an eye out though, and stopped and pointed out an eagle across the lake that I would never have seen.  I was so excited I forgot about the heat and initial awkwardness of walking with the poles and stood transfixed. 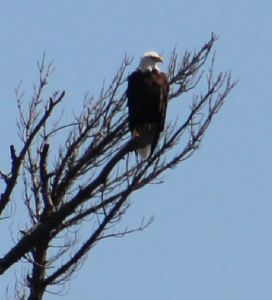 First shot of an eagle

From that point on the walk was great. I was becoming more comfortable with the poles and there were several little places to stop and every single picture I took was beautiful.  When a place is that gorgeous you just point and shoot. 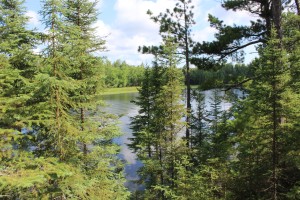 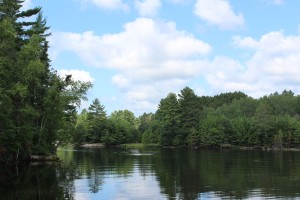 One of my favorites 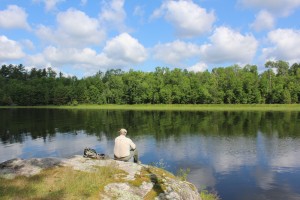 Howard sitting on a rock 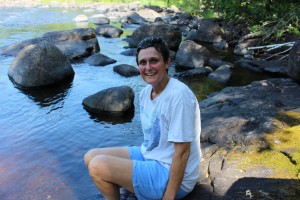 After several stops, all more breathtaking than the last, we reached Vermillion Gorge itself. It did not disappoint.  The water rushed through this great canyon gorge and we sat on the rocks and ate our lunch; another first for me. After getting a little protein kick, I had to see if I could reach the rocks below and was very happy that with care I could climb down.  The view was so amazing and down below all you could hear was the rushing water.  Very neat moment. 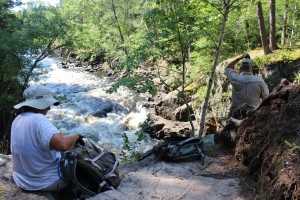 Linda sitting on a rock enjoying the view 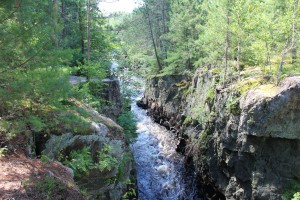 The gorge from the top

The gorge from ground level

Picture from the rocks below

Lee came down with me after a while

Great pic that Howard took for us

The moss was beautiful it looked like fairyland to me

After hanging out for a while we went back and Lee set a very brisk pace.  Howard said he was like a cow going back to the barn which would have made me laugh if I had any breath for it.  Finally, I cried uncle and asked for a break and then had Lee carry the pack the rest of the way.  It was very hot on the way back I was glad when I saw the parking lot but Howard had one more surprise.  He asked if I had one more short walk in me, and honestly for a moment I thought “No way!” but when he mentioned a waterfall I perked up.  I love waterfalls, plus we got to ride in the air-conditioned truck for 10 miles before getting there, and then it was a very short walk to an amazing view of the Vermillion Falls.  What was especially cool was that we had seen The Falls at Vermillion River in Hastings and now we were seeing the falls from the same river to the north. I liked these falls even better than the first though because they had a really neat rock “chute” that water was rushing through.   Plus at the end there was, no kidding, one of the best views I have seen since starting this lifestyle.  We sat on the rocks and put our feet in the water and I got very emotional for a moment.  If nine months ago anyone had told me I would be sitting in that beautiful place and looking at that view with Howard and Linda I would have thought they were crazy.  This lifestyle has truly exceeded my wildest expectations and I feel very blessed to be doing this.

Water rushing though the chute

Enjoying thesun and foot massage …doesn’t get better than this

Lee decided to join in on the fun 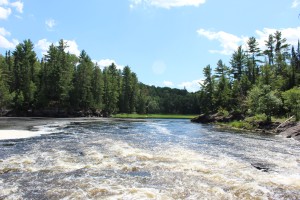 The view that almost made me cry

And if that wasn’t enough, after we got back to the campground and ate and rested a bit, Howard took out one of the pontoon boats from the resort (they get to use them for free if no one is renting them) and Linda asked him to take me over to where the Eagles nest was.  We got some amazing shots of a pair of eagles with a nest, watched the sunset, and towards the end I slipped into the water and took a quick swim in the lake.  The lake was cool but comfortable and really dark and mysterious.  It was beautiful, something I have always wanted to do,  and instead of talking myself out of it, I just jumped right in, which really what this life is all about!!

Eagle in the tree

Eagle in the nest 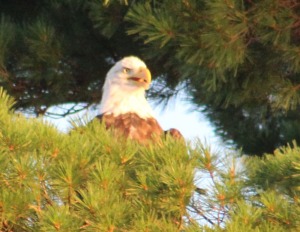 The best closeup, I think Lee got this one

The resort viewed from the lake

16 thoughts on “Eagles and Waterfalls”