Today is our 26th wedding anniversary, but our first on the road.  So if you will indulge me, I thought I would take a few minutes to write the story of us, and a love letter to my husband.  I am truly grateful to have married this man and grateful for the life we have created together and I wanted to celebrate that.

Lee and I met when he was 14 and I was 16.  We were both working at our first job as busboys in a nice restaurant on the west side of Columbus.  I had started there a few weeks before Lee and was in the process of bending over a long table and removing a tablecloth when we were introduced.  So the first thing he saw was my tush, which thankfully is one of my better features, and apparently it made an impression!  I was a pretty awkward 16-year-old.  I had a car (a 20-year-old yellow VW bug) so you know I thought I was cool, but I was really uncertain about everything in life.  In walks this kid who was like no one I had ever met.  He wore a trench coat and a fedora and was completely fascinated with everything British.  He exuded a confidence well beyond his years and was funny and kind.  I’ve seriously never met anyone like him then or since.  His story is that he fell in love with me the moment he met me.  For years I didn’t believe it, but the best man at our wedding many years later did verify that in school Lee had always said he had already met the girl he was going to marry and knew it the moment he saw her. I on the other hand took quite awhile to catch up.  We were friends for years, even after we both left the job and he moved to a different part of Columbus and eventually I went off to college, but friends who rarely saw each other.  I spent the next 4 years dating a series of not so great guys and Lee had a serious relationship and ultimately joined the Air Force right out of high school.  A two-year age difference is a large one through the high school years and certainly through the college ones so the timing was never right for us.

Lee had always wanted to live in England, and had the opportunity in the Air Force to do a tour at RAF Chicksands, an Air Force base about an hour outside of London.  I went to college, left college, got engaged, broke the engagement, and was generally aimless when Lee came back to the states.  So now he is 20 and I am 22 and we reconnect with each other.  Finally the timing was right and at a time when we were both looking for purpose we re-found each other.  So we went on a real date…our first and it was to Red Lobster. Now, I know some people stick up their nose at Red Lobster, but I will forever love them because that’s the night I fell in love with Lee.  Here we were, sitting across from each other, and it was awkward because we didn’t really know each other because we had been apart for so long, when Lee picked up the paper napkin wrap that hold the napkin and silverware together, and did 20 minutes on why the paper napkin rings were unnecessary.  I had not laughed that hard ever…truly…tears were streaming down my face…and in that 20 minutes I fell in love.  Ladies, take note.  Looks fade, money gets spent, but the ability to make someone laugh lasts forever.   So we slept together that night (and that was really good) and moved in together a week later.  We’ve never been apart since.

I was ready to get going with my life and start my family.  Lee was happy to be with me finally after all these years and was happy to go along with whatever I wanted.  So we started to plan the wedding and ended up getting pregnant right away.  Hence the February anniversary.  These days people get married before, during, and after their first pregnancy but back then it still had a stigma (at least in small town Ohio) so we moved up the wedding so I could do it while I had a relatively small belly.  It was a pretty stressful affair.  Everyone was worried we were too young, everyone was sure it wouldn’t last (I heard later many folks gave us 6 months at the wedding), and it was complicated by the fact that my parents had just gotten a very messy divorce and their relationship was still pretty raw.  But despite all that, I got the wedding that I had envisioned as a girl and if it wasn’t perfect I will never forget the look on his face as I walked down the aisle.  I wouldn’t trade that for anything.

So we had Kyrston, and then Katy.  How can I talk about those early years? Well we had absolutely no idea what we were doing.  But we loved each other and more importantly we were friends.  There were many times the friendship saved the marriage, because I couldn’t walk away from my best friend in the whole world.  I often tell young couples that years 1,3,7, and 10 were the toughest…after that things settled down and it really is true.  Lee got a really great job in the production field he had always dreamed of working in, we rented a house on a farm from my father which was great for the girls, we had Kay, and eventually after years of struggling financially were able to buy our first home.  It was not easy; Lee traveled a lot for work and it turned out I was not so good at being alone, but there were many wonderful moments in those years.  I loved being a mother…I don’t know how good I was at it, but I felt fulfilled by the family I created and I fiercely protected it. Lee was always 100% committed.  Thinking back on how I was all over the place during that time, I really appreciate the fact that he stayed.  Lesser men might have walked away, but he loved me and our girls and he filled our life the best he could with that love and laughter.    As serious as things got, he could always make me laugh and there were many times the laughter got me through.

So we were going along living our life and then things got interesting.  I always worked, but at whatever job had good benefits and flexible hours so I never really felt fulfilled professionally.  Then the company I worked for went through a major merger and a job opportunity presented itself.  I was completely not qualified and it would require moving to the Northeast, but I applied …sure I wouldn’t get the job.  Turns out because of the chaos in the company only 4 people applied and I actually got the business analyst position.  When I went home to talk to Lee about it, I was sure he wouldn’t want to leave Columbus.  Our family was there, our home (which he loved) was there, and he had a good position with a production company.  What he did say will tell you everything about Lee you ever need to know.  He looked at me and said, “I think you should take the job.  I’ve had my chance and now it’s your turn.” I was and still am completely humbled by his generosity.  His willingness to give up everything, so I could have a shot at a profession was amazing.  So he gave up his job, we moved to New Hampshire and started a new life together.  He became the primary care giver to our kids and I worked long hours and traveled all over the country.  I have to say he was better at raising the kids than I ever was, but it was still tough as not many couples during this time period had reversed roles.  This is pretty commonplace now and I firmly stand by the fact that overall it was great for the kids.  They got to experience primary parenting by both of us for large chunks of their lives and hopefully it will make them more well-rounded individuals.

The next 13 years were really great.  After some initial struggles, we really hit our stride.  Lee started a non-profit television station from nothing, and I fulfilled my dream to get my bachelors and my master’s degree and saw multiple promotions at my job.   The girls made their way through their teen years…and as any parent knows who has survived those years: it ain’t easy. But overall I think we did an OK job.  One kid left, then another, and suddenly, with only one left in the house, we were looking at what life would look like without children.  We were finally making some real money and wondering what things would look like in the future.  So, that’s where the blog picks up..and I won’t repeat here what I have already said in those posts, but I will say if it wasn’t for Lee this wouldn’t be my life.  I would never have had the vision or the courage to completely turn things upside down and start this adventure.  He brings those things to our marriage and I am so incredibly grateful to him for it. Plus he can still kiss me in a way which makes me tingle which is a really good thing 🙂 And he makes me laugh…oh, how he makes me laugh…

Having an anniversary in February to this point has not been that fun.  Not much you can do in the northeast during the winter time.  So today we went  to celebrate our first wedding anniversary in this new life by going down to the beach together.  I can’t think of a thing I would rather do to reaffirm our life together.  We weren’t going to eat dinner out, but decided to go to Crabby Bill’s, which was on my list of places to see and had a wonderful dinner for only $50 (including tip).   Lee’s grouper was amazing!!  They had a musician playing live and he was really terrific.  We really enjoyed it.

Musician at Crabby Bill’s was amazing

Sitting on the patio at Crabby Bill’s

Finally to honor our marriage I wanted to share some pictures of us on our new adventure.  I can write that we are really, truly happy but  the pictures really say it all. 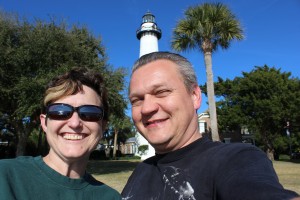 In Deb and Steve’s camper in Rock Hill 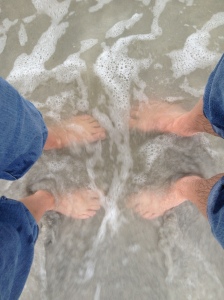 12 thoughts on “First Wedding Anniversary on the Road”