This week was absolutely amazing.  Our rally friends Cori, Greg,  Deb and Steve were all here in Keene to spend time with us and see the Keene Pumpkin Festival.  (It turned out that was not as good an idea as everyone thought it was. That’s foreshadowing. Read on. #pumpkinriots. – Lee) Deb and Steve were here on Monday and we got to spend Monday and Wednesday night with them.   Lee was super busy as his whole week is spent in preparation for live coverage of the Keene pumpkin festival, but we still had lots of evening time to spend with them.  For those who don’t know, Lee runs the local community television station here in Keene.  He’s been the executive director for many years and actually started the station with a very small amount of funding and a very large dream 10 years ago.  So, although we are ready to move on with our lives, it has been bittersweet.  Giving his 30 day notice to his board of directors was very emotional, and it was great to have friends from our new life here to support him.

Cori and Greg came into town on Friday and all six of us got together for a night of steak dinner, campfires, and lots of laughter.  Things have obviously been chaotic for us over the last 30 days, and the laughter was exactly what we needed.  I have to say Greg is incredibly funny so he would get us rolling then Steve would chime in and between the two of them I laughed until I cried.  Lee said it took so much of his stress away…laughter really is the best medicine. 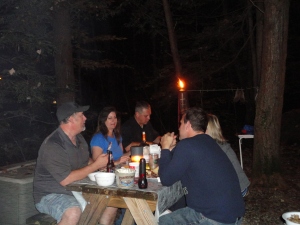 Everyone loved the leaves here and the quaintness of our little New England town. (Little did they know what was coming……)  It is peak leaf season and since the summer was so wet the colors were particularly vivid.  Greg said he had never seen such vibrant reds and he is absolutely right.  I’ve seen some beautiful foliage in other parts of the country, but nothing beats the fall in New England after a wet summer.  Lee was up at 5am on Saturday (his annual pumpkin festival coverage is a dawn to dusk event) so I took the team on a tour of the city.  In  Keene once a year they close the downtown and try to set the Guinness Book World record for most lit carved pumpkins.  Last year we set the record with over 30,000 and I couldn’t wait to show the group everything.  It’s a really terrific event for the local business owners as they do a months worth of business in one day, and all of the food is provided as a fund-raiser by local non profits such as Volunteer Fire departments, Lion’s Club, etc.  Not only do you feel great  about donating to charity but the food is phenomenal.  Greg and Steve ate their way up and down the aisles 🙂

Greg, Cori, Steve, and Deb in front of the large pumpkin tower

One of my favorite parts of the festival is the kids costume parade and every year I get to provide color commentary as the kids walk by in their costumes.  Over the years I have done the event with my mom and my girls but this year I shanghaied Cori into being my guest co-host.  Cori has never been on TV before so she was a little nervous, but she quickly got into the spirit of it and did a great job helping me.  It was bittersweet because I knew it would be our last year at the event and it’s been such a huge part of our lives I really was feeling a bit sad about it.

Lee was having a blast though, because for the first time he had a whole cast of professional media people hosting the event all day.  Over the years Lee has had a variety of hosts, but this was the most professionally produced event for him ever and he was having a blast.  So while he was working I walked the main street with my friends and showed them all the people and places I have grown to love over the last 13 years.  Keene has been a wonderful place to raise our children and since it is a small town (about 25,000) we have grown to be a part of the community.  Since Lee runs the local television station he knows everybody and by extension many people know me.  I walked the gang everywhere and they were good sports, even buying shoes at the best shoe store I’ve ever been to: Ted’s Shoe and Sports.  I like to support local businesses and it was great to see them so busy!

As a local I like the morning the best, but as the day goes on it always gets super crowded, so we all ended up leaving in the early evening to go back to the camper and hang out.  Lee of course stayed as he would be there until midnight or so, but I am just not a fan of the crowds.  Plus things get rowdy with all the local college kids after dark, so I always try to be out of there before then.  Well this year I am so glad I did.  Some of you may have heard that the college students actually rioted about two blocks away from the event.  They were starting fires, flipping cars over, throwing beer bottles at each other, and generally making a menace of themselves.  The police department did a good job of containing it to off the footprint of the actual pumpkin fest but at one point there were over 4,000 kids making asses of themselves.  Usually the pumpkin festival coverage is very folksy, but the host Jared felt he needed to get some footage of what was going on so he took Lee as his camera man and they went to get some coverage.  Lee said it was crazy.  Kids were throwing beer bottles at them and the behavior was much worse than anyone ever expected.  Jared got a couple of interviews with kids who said the police were using tear gas to break up the gatherings and shooting them with paintball-like pepper pellets.  Don’t get me wrong, I’ve seen the video and these kids were completely out of control and the police did the best they could, but the thought of tear gas and riot gear in our small town is not a pleasant one.  Plus my husband is down there with a camera right in the middle of it.  I was glad that they didn’t stay long as the situation was really not safe.

Back at the camper though Cori and Greg and I were hanging out when Steve and Deb came down to tell us to turn on the station.  Apparently the person who produces the pumpkin festival was displeased that Cheshire TV was covering what was happening at the campus and threatened to “pull the plug” on the television coverage.  It takes a special kind of hubris to march onto a live broadcast and try to grab the microphone out of the hand of the host of a show, but hey, that’s Keene. The downside of living in such a small town is the “movers and shakers” think they own the place and the rest of us work for them.  Lee is VERY serious about the First Amendment…it’s practically his religion and censorship of any kind is a big no-no in his book.  (Scratch that. It IS my religion. It’s the most important amendment, that’s why they wrote it first. – Lee) I get she was trying to control the message and since running this annual event is her full-time job for the entire year her livelihood depends on its existence, but there are lines you just don’t cross.  One positive thing that came out of the entire scene though is the melancholy from the morning evaporated.  Again it’s been a wonderful place for us to raise our kids, but it’s definitely time to move on. There is a whole wide world out there and this is just one tiny little town that sometimes takes itself waaaay to seriously.   🙂

For those who are interested I have provided a link.

So, we had tons of drama but the group were really good sports about it.  They found the whole thing pretty hysterical (riots aside) and thanked us for the entertainment.  Family members, bosses, and friends from Texas, California, and Virginia were texting them throughout the day saying they saw the riot on their local news and wanted to check in with them.  Don’t get me wrong, the riots were NOT funny, but since they were contained to a pretty small area of town (good job police!!) it was a non issue for them.  Plus it gave us all lots to talk about.

Sunday we had another great day together.  Lee woke up to requests from network affiliates and had to run out first thing in the morning and provide footage of the on-air altercation to some of them (CBS, NBC, NECN) which was kind of exciting, but the rest of the day we just hung out together.  More laughter, sharing of stories, and getting to know each other better.  One of the best weekends I have ever spent with friends in my life!!  I don’t know if all camping people are this cool or we just got incredibly lucky at the rally we attended, but I love love these people and feel so very blessed they are in our life.

8 thoughts on “Last Time at the Keene Pumpkin Festival”