We’ve been hanging close to home this weekend…Saturday we had a house showing in the morning and I went to my friends funeral at 11:00.  The funeral was tough.  When someone is that young (42) and dies suddenly there are not many comforting things to say, but the priests did a full mass and overall I found it was good to be in a house of God as such a time .  I am not Catholic,  but appreciate the attention and care they spend at funerals and since Jim was baptized in that church the ceremony had extra meaning for his parents and family.  When I got home that afternoon Lee and I relaxed and spent time with Kay until she went to work.   Unfortunately,  in the evening we received a text that the morning visitor had not selected our house.  The selling process has pretty brutal.  The market is very slow here in Keene, and although our house is clean and as nice as we could make it, it’s not a showplace or anything.  It’s just a good solid house to raise kids in.  We’ve priced it very aggressively, but so far it’s either been “too much house” for younger couples or too dated (ie: not a new build) for folks who can afford something newer.  I get it…but it’s tough because we really want to get on with the next chapter of our lives and selling the house has to happen first.  Plus we have watched friend after friend from the rally sell their homes and now we are the last couple of our core group of friends to sell.  So the grief from the funeral and the disappointment from not being selected all rolled into together and I had a nice crying session.  I am not a cry at the drop of a hat person, but I certainly don’t think there is anything wrong with it and sometimes a good cry is totally called for.  After the crying I just went to bed and hoped tomorrow would be a better day.

When I woke up on Sunday I thought I have two choices.  I can lay here and feel depressed or I can get up and do something positive.  So I went downstairs and called my friend Jo and asked her if we could come visit her in Kennebunkport today.  She very graciously said “of course”  and I took a quick shower, got dressed and Lee and I jumped in the car.   The drive was good (it takes about 2-1/2 hours) and Lee and I talked a little and then listed to a very cool NPR podcast about the Gallipolis  Islands.  I was feeling more relaxed by the time we got to the campground, Hemlock Grove, and met Jo at the gate.  She drove us back to her site (76) which is at the very end of the campground and showed us where they are at.  Her site was really big with terrific views and I loved how she had total privacy on three sides.  It was pretty buggy though, the mosquitoes were huge, because the campground had some standing water behind some of the sites.  Still for Maine,  in season,  it was a great spot and Jo and Ben said several times how lucky they felt to have it because they had rented it for the season site unseen.

Jo and her Arctic Fox

It was noon when we got there, so we decided to go down the road a bit and have lunch at this little lunch truck.  Generally I am a fan of these lunch trucks and this one did not disappoint.  Everything we ate, (lobster rolls, clam chowder, and 50/50 burgers (half burger half bacon) was really good and reasonable priced.  Plus they had a nice little picnic table area outside that was clean and shaded to eat under. 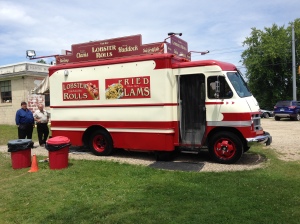 Lunch truck we ate at..lobster rolls, clam chowder, and a 50/50 burger half bacon half beef all yummy

After lunch we drove around a bit and saw Kennebunkport (very touristy town that was packed with people but neat shops), and drove along the coast a bit to see the Senior Bushes summer home.  They live out on Walker Point in all things considered a modest compound that is closed off by a gate and a Secret Service guard-house.  Ben was walking on the beach the other day and saw Barbara Bush walking along the beach picking up shells (with her service agent in tow!!) and I guess they are really a part of the community here, which is nice.  Good for them.

After the Bush compound, I pulled out my Roadside Attractions app (which I haven’t used all summer since we have been staying in one place) and saw there was a Wedding Cake House close by.  Ben was nice enough to re-route us a bit and I got to stop and take this picture.  I love looking at goofy stuff as we traveled and it cheered me immensely to see the house. 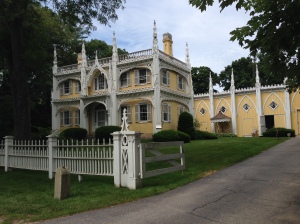 After the Wedding Cake house we went back to the camper and hung out inside.  It was nice to see it close up again and we got several little ideas we want to adopt in our camper.   We talked for a long time…the four of us never lack for conversation, and walked the dogs around the campground.  It’s small (with only 75 sites) and has lots of seasonals, but the seasonal sites are VERY nice, most are little cottages with permanent porches and lots of landscaping.  Jo said the seasonals have been pretty clicky and she hasn’t gotten to know people very well, but Ben made a friend Bob who is an avid fisherman and they have gone fishing a couple of times together.   I really liked it..it was quiet with spacious roads and overly large sites for this area of the country.  Plus Jo said they have strong WiFi which works everywhere even in her site way in the back because the owners have boosters throughout the campground.  The sites closer to the road do have some traffic noise, but it’s reasonably close to the beach, grocery store, and Kennebunkport, and I think it would be a good place to stay to see the area.  Wouldn’t necessarily recommend it for a whole season, but a week or two would be good.

After chatting we decided to go eat dinner down by the water.  We knew it would be pricey (high season by the water in Maine is NOT cheap) but we decided to give ourselves a little treat.  The restaurant was cool, we at on the deck with lots of views of boats and the food was really good. Three of us had the stuffed halibut and Jo has the swordfish which was all very fresh.  Now let me warn you the kitchen was slow and the service was mediocre, but honestly I have come to expect that from New England restaurants.  But the food was great and the company as better so definitely glad we did it. 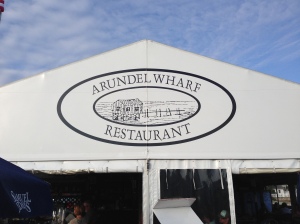 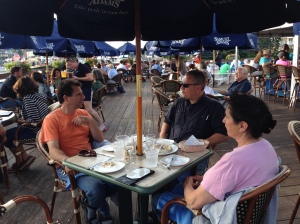 Ben, Lee, and Jo eating ocean side. The stuffed halibut was VERY good. On the pricey side but yummy and the view was awesome

View from the restaurant

View from the restaurant

After eating we had to drive back,  but Jo and Ben took the dogs down to the beach and enjoyed the sunset.  Wish we could have stayed but definitely next time, and I am truly grateful for having such great friends to help cheer me up and give me a little glimpse into what our future trips will be like.  It’s not perfect, but what in life is, but it’s pretty darn great in comparison 🙂  Next weekend Ben’s going fishing in Mexico and Jo is going to come hang out with us, so hopefully I can return the favor and get her out into Keene a bit.

Ben, Peyton, and Anubis on the beach

Small campground with 75 sites well spread apart and many can fit motorhomes or large fifth wheels,  Many seasonal campers in very nice sites.  Overly large sites and reasonably priced for the season.  close to ocean, shopping center, and Kennebunkport.  Strong Wifi thought the campground and gates to control access.  The couple who owns the campground is very nice.  Smallish campstore.  Clean bathrooms and laundry facilities, but they only have two washers and four dryers.  Pet friendly, with numerous pet poop depositories sprinkled throughout the campsite.  Some traffic noise from Rte 1 in the sites closer to the front but recommend Site 76 if it is available.  The people in the campground are not super friendly but not overly hostile (that sort of goes with the general attitude in Maine).  I wouldn’t recommend a super long stay but a great jumping off point to see numerous attractions along the Southern Maine Coast.

8 thoughts on “First Time Visiting Rally Friends at their Campsite”