We got up early on Saturday and headed to Columbus to spend the night with my in-laws.  Lee and I are originally from Columbus, OH and Lee hadn’t seen his Mom and Step-Dad in a while so he was  very excited to stop along the way…plus we wanted to see what it would be like to park the Fiver in front of someone’s house on a residential street.  It worked OK, although it was a bit of an inconvenience for the neighbors and I wouldn’t want to do it for more than one night.  My in-laws are extremely energetic people who are “semi-retired”.  I say semi-retired because they took their passion for landscaping and flowers and now work in a greenhouse.  It was a big sale day for flowers but they left early and met us at their house.  It was so great showing off the RV and they really really liked it. Plus being the super generous people that they are they kept finding stuff in their house they knew would work well and they loaded us up with stuff. I told Lee we were supposed to be getting rid of stuff not getting more but DeDe and Denny always have the coolest stuff and they were very careful to only give us things that had two purposes. I love that they remembered the rule that everything had to have two purposes to go in the camper and it was fun receiving some neat treasures.  My favorites were three connected collapsible bowls (Update:  Love the concept but turns out I never needed them.  Still have them in a box in the basement but haven’t used them one time)  and two solar-powered Chinese lantern lights.  Lee loved the battery charger set and the collapsible hose. 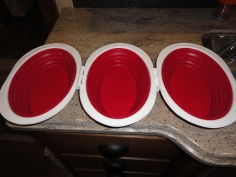 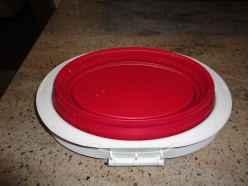 They are absolutely the best in-laws ever and I am not just saying that because they both read my blog 🙂 They read my blog because they are truly interested in our lives.  One of the first questions DeDe asked was where had we put the magnets.  She remembered that I collected magnets from the campgrounds we went to and saw there was no metal in the camper to hang them on.  Lee showed her the custom piece of metal he had cut and placed inside one of the cabinets and it meant the world to me that not only did she remember I collected magnets, but worried about where I would store them. How sweet is that. 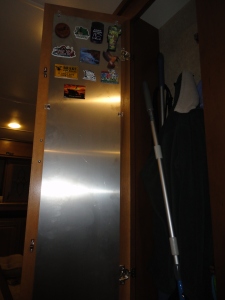 Also we had been wanting to go to Lee’s mecca…The Container Store, and they were very patient following us around for over an hour as we bought lots of little containers for stuff.  Lee was very restrained considering how much he loves boxes and it was only $226 but hey, you only setup your new RV once!!

Sunday Morning we left their house and headed to Louisville, KY.  I am an avid RV-Dreams reader and early in his travels, Howard had a custom truck bed cover made in Louisville, KY.  Lee wanted one just like it and since Louisville is only 4 hours south of Columbus had made arrangements with the same person to do one for us.  It was going to take around 6 hours to do, but we had really thought it would be important to extend our storage area to the truck and keep our wood dry so it was worth a side trip.  Lee called James when we were about an hour away and asked where we should drop the trailer since he would need the truck unencumbered and he recommended a Cracker Barrel about two miles from his house.  Many Cracker Barrels have extra-large parking spaces for Semi’s and RV’s but this one did no,t so we were a bit stymied.  I saw a Pilot station nearby and thought we should find out if they would less us park there for six hours.  As a side note we absolutely LOVE Flying J’s and it is definitely solidified as our stop of choice to get gas…the ones with RV lanes are totally amazing and by far the easiest in/out we have found.  That being said they are not very scenic places to stop and have lunch, so we have started using rest areas for lunch and just gas up at the Flyng J’s.  Sometimes you get really lucky at rest area…check out this picture of the view we had during our lunch today…right outside our camper window…amazing. 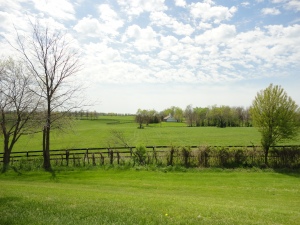 The Pilot station was very happy to let us drop the trailer. There was no fee of any kind and they thanked Lee for coming in to notify them.  That being said it was super crowded  and I wasn’t thrilled about spending 6 hours in a busy truck stop.  Luckily James came to the Truck stop to meet us and saw within about 5 minutes the truck cover would not work.  Our hitch was too big and there wasn’t enough area to pool water??  I didn’t really get it, but Lee did and I realized we could push through and get to Riverside Plantation by 5:30.  Wow, that was awesome!  I called the campground and our spot was open and they extended our reservation one night…fantastic!!

The rest of the drive was largely uneventful. The new truck handled Jellico Mountain very well and this really neat thing happened when we stopped at a rest area.  There was an older gentleman check the torque on his trailer lug nuts, and Lee struck up a conversation because we had read you were supposed to be very careful about the torque on a new camper.  The man came right over and checked ours (finding only one slightly loose) and as we exchanged pleasantries we realized he was from the same small town I grew up in and lived there until the 8th grade.  I asked him if he knew my father and not only did he know my dad, they played little league baseball together and my grandfather coached him.  It truly is a very small world!  I called my dad from the top of the mountain and asked if he remembered and him, and he did.  This is why I love camping…not only are people incredibly nice but there are all these little surprises.

We made it to River Plantation...passing lots of touristy stuff along the way which was fun to look at since it had been largely interstate views up until that point.  Site 401 is “the best” in the campground according to staff and we felt really lucky to get it the extra day.   We did have a lot of trouble backing in (Lee’s first time backing up the fiver) and even more trouble leveling, but at one point I looked up and a nice older gentleman was standing there.  It was Red from the RV -Dreams forum and he was quick to say he didn’t wanted to interrupt us but Howard and Linda were having a campfire at 7.  It was so sweet that he walked down to tell us and I gave him a huge hug…Red is one of the active forum posters and he has owned 12 RV’s  in his life but this is his first 5th wheel.  He told us later he has trouble backing in as well…what a sweetheart.  We ate a quick dinner and then walked down to meet the group.  There was a huge circle of people and all of a sudden I felt intimidated.

You have to understand I have been talking to these folks for months online and I have read every word Howard has written but being there in person was a bit overwhelming. As soon as we walked up though I heard a squeal and Kelly…who I had talked to several times jumped up and immediately gave me a big hug.  Then Howard and Linda stopped what they were doing and came over and introduced themselves.  It must be weird for them, meeting people who know so much about them, but don’t really know them, but it felt like meeting old friends.  I did get a chance to tell Howard how much I loved his journal and how it inspired me to do this blog and he was very very nice about it. I felt a little star struck at first…in the RV world they are mini celebrities…but they are just regular people like us…regular people with thousands of followers 🙂  But hey, I just hit 350 followers so you never know!!

We had a great time meeting so many people I had talked to online and more are coming tomorrow…I am already having a terrific time and we haven’t even really started yet.  I haven’t felt this giddy in years…maybe that’s why I woke up at 2am and am writing this post…way to excited to sleep.  More tomorrow and thanks for reading I think I am going to try to get some more sleep…big day tomorrow.