Some friends of ours from Columbus, Ohio (our original hometown) were on a two-week camping trip through New England and we met up with them.   The couple have two daughters aged 12 and 8 and camping with kids is fun but a totally different experience.  We ended up meeting them in Acadia, Maine at the KOA Bar Harbor Oceanside campsite.   Just through good luck we ended up getting to the campsite within minutes of each other, which was great, and we all proceeded to set up.  They are in an ultra-lite, which I thought was very nice but took them very little time to set up, mainly I think because they were in the camping mode already, plus we had a new mattress topper for the bed (down alternative because feathers make me sneeze and VERY comfortable) which I had to wrestle into place.  I don’t really notice the lack of space on either side of the mattress until I have to make the bed and wrestling the mattress topper into place was a challenge to say the least.  At one point I was kneeling on the mattress and trying to lift it at the same time to slip the cover sheet under.. pretty comical I am sure.   Anyway, my point is that apparently I have gotten pretty darn used to my setup routine because trying to quicken the pace, to hang out with friends sooner was stressing me out 🙂  All self-imposed but it’s funny how quickly we can become used to a routine.

The campsite is different from any we have been to before, wide open with RV’s as close to each other as you can possibly put them.  Our spot faces a little spot of the ocean bay, though, and is on a corner which is pretty great.  They have some great  sites right on the water if you don’t need sewer hookup, but really the whole point is to use the campground as a jumping off point for going to Acadia National Park, so it’s not designed to spend tons of time there.  My major disappointment was the lack of the sound of waves crashing, because it is a bay it’s pretty sheltered, but the kids enjoyed walking down to the shore and picking up shells and they saw some crabs.  The bathrooms were very clean, the family uses the campground showers instead of the tiny one in the camper which they have turned into an additional storage area.  Pretty ingenious 🙂  and unfortunately the showers routinely had no hot water.  There were several complaints from both cabin users and campers.  It wasn’t an issue for us though and I have to say we had a great site 105 which has a great view of a little sliver of ocean.  There were some other wonderful sites on the water, but I guess they book up really quick and lots of sites where folks are seriously on top of each other with no view whatsoever.  The view from our site is below which was great. 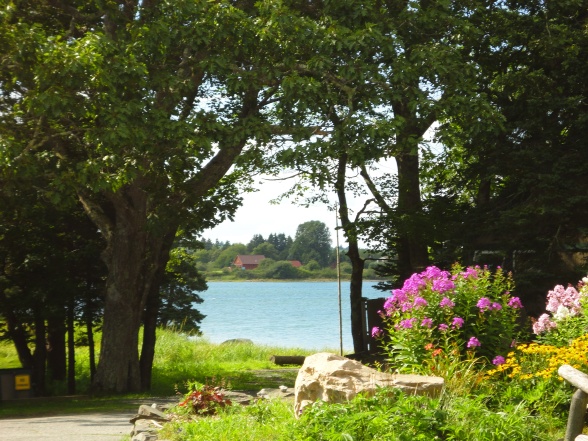 The people who run the campground were nice if a bit harried.  It was incredibly busy and because of the tight fits on the campground, every camper is escorted and helped to pull into the correct spot.  Lots of French Canadians at the site, and folks were incredibly polite.  Lots and lots of big dogs, we saw a couple beautiful huskies.  Overall I liked it. Don’t kid yourself, though, this is not ocean side camping like you are picturing in your mind, but for what it is (a place to use to visit Bar Harbor and Acadia National Park) it is a fair value.  The shower issue and extreme closeness of sites requires a downgrade though and I rate it at 3 out of 5 pine cones.

One of the best parts of camping with friends is getting to sit around the campfire with them. The 12-year-old and I spent a very entertaining hour trying to create the perfect toasted marshmallow  (she managed to pull it off; I was close but not quite) and we all chatted into the evening. For the first time I had to worry about when the quiet hours were, which was funny.  We never make any noise when it’s just the two of us.  This time we got to sit at the fun campsite!!

The next day Lee and I went to Acadia Park which although crowded was really fun.  This is a great place if you like biking as there are 42 miles of carriage paths which were changed into bike paths.  We also saw lots of little kids hiking with their parents as there are hundreds of miles of hiking trails.  Since we weren’t really into doing either, we drove to the top of Cadillac Mountain (which is free) and took some great pictures of the ocean.

Next we took the park loop road ($20 for a 7 day pass) and stopped at various scenic sites along the way.  Did you know that seniors 64 and older can purchase a lifetime National park pass for $10 that gains entry into all National Parks in the country??  Say what you want about our government but there are some things they do right.   My favorite part of the loop was when we stopped at Thunder Hole and got down on the rocks and watched the ocean come crashing in on the rocks.  It was great, and you could get as close to the water as you wanted.  All and all a lovely day.

We also visited Bar Harbor which was pretty touristy but fun as the harbor was fogged in and seeing all the boats amid the fog certainly added to the experience.  A great family style steak dinner at night and more time around the campfire capped off the experience.  Great time hanging out with friends and we are now e packing up and headed to inland Maine and they are branching off to Cape Cod.

(Taste tested by an 8-year-old and declared pretty good)

3.  Peel lemons leaving inner white pith on fruit (reserve lemons for another use)

5.  Combine rind, sugar, and 1 cup of water in a saucepan

7.  Bring to a boil and boil for 7 minutes; stir frequently

9.  Mix with lemon juice/water mixture and chill 2 hours before serving

One thought on “First Time Camping with Friends”