Lee and I have been married and raising kids for a long time–a really long time. Over the years we have often talked about what we would do someday when the kids were grown and gone.  One of our ideas  was traveling around the country in a camper.  My grandparents did it for years. They sold their house, bought an RV, and spent six months traveling the fifty states.  The freedom of that was VERY appealing to me, and I’ll admit I had a completely romanticized view of what that would be like.   As we grew older, and frankly more practical, we still talked about it, but the practicalities were a larger part of the conversation and through the teen years there was always something going on.  Fast forward to a few weeks ago, our first romantic weekend getaway in 20 years.  I kid you not, we had taken two vacations alone, but hadn’t had a romantic weekend alone since the kids were babies, and our oldest is 24, you do the math. We loved the weekend; we went to the Corning glass festival, stayed in a lovely B&B and really enjoyed each other’s company.  But the weekend cost well over  $800 and on the 5 hour drive home were lamenting the fact that we wouldn’t be able to afford to do this very often. The subject of camping came up again, and as we often had, we started to talk about how great that would be but the what the challenges would be.  This time though the conversation was different.  There were less challenges than ever before and oddly the idea seemed almost feasible.  You can cover a lot of conversational ground in a 5 hour drive! I had taken an extra day off from work so we decided to travel to Campers Inn (a large RV dealer in Nashua, NH) and take a look to see what our options might be.

The next morning we went to the dealer and started with the very smallest camper on the lot.  We wanted a shower and on board toilet, (I have to confess, that was my requirement. I just can’t stand the idea of walking, unshowered, to a public shower and then standing in someone else’s dirty water. It’s one of the reasons I’ve never been that interested in camping. It’s just gross. – Lee) so that ruled out pop-up style campers, and we were pleasantly surprised to find that there are tiny campers that have bathrooms that are just a little bigger than pop-ups, but aren’t pop-ups. We were also limited to the 3500 lb towing capability of our minivan, which kept us in the very-small-trailer category.

I am a bit claustrophobic so I would walk into a camper, walk in the bathroom and shut the door, and walk right back out again. Lee and Lance Simmons (an excellent salesperson who is an avid camping enthusiast himself) were very patient for the next 2-1/2 hours as we methodically worked our way through the various models and types available.  (It was amazing how quickly both of us decided what liked and didn’t like.-Lee) Finally we walked into a travel trailer and I felt good.  It was a “couples” trailer, designed for two people so it felt like there was extra space and I felt comfortable and at home.  Two problems, though: it was $35,000 and it was over our 3500 lb tow limit. There was one I could have lived with, but it would have been a stretch versus the larger ones I actually felt comfortable in.

I told Lee we could buy a truck…trade in my car and get a new truck, so that problem was solved but we weren’t going to spend that much money to try something out.  We were in luck, however. There was one used model that was similar to what we liked on the lot. A 2005 Keystone Hornet for $12,500; and despite having obviously seen a lot of use it was clean and most importantly, designed for two people.  We decided to sleep on it (something else we have learned the value of as we have gotten older) and do some internet research.

That night I went online, typed the make and model into Craig’s list, and the EXACT same camper was available in my small town! What are the odds??? It was quite a bit newer, a 2010 model, and immaculately clean for only $15,000!  This really got our attention; when the universe wants you to do something it generally sweeps barriers aside with remarkable speed. I won’t bore you with all the details but here is how the next four days went:

5/29: See the camper, meet the incredibly nice retired couple who have barely used it. (It turns out he hated camping!) Make a commitment to buy the camper.

5/30: Go to trade in my car and buy a truck to haul camper, find out my company has a partnership deal and I get any truck on the lot at invoice price automatically. Find a truck and buy a truck, drive the truck home.

5/31: 401K Money gets direct deposited into our account. Lee gets the money, meets the couple, and buys the camper.

On Monday we talked about getting a little camper, on Friday we owned a “new to us” 32′ travel trailer and a brand new truck to pull it with. 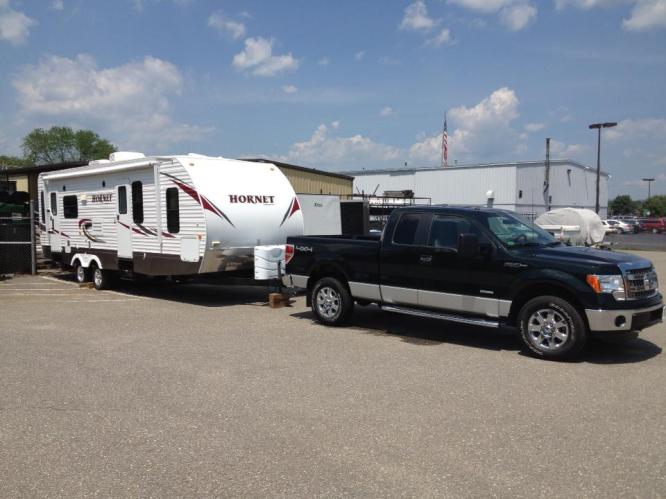