We left Moab around 8:30am having gone 9 days on a single 85 gallon tank of water (a personal best for us) and having lots of wonderful memories of Utah. We had decided to give ourselves the extra day of travel in case we ran into any weather issues up north, and we headed out, sad to leave, but excited about spending the summer in Oregon. Since we wanted to travel as efficiently as possible, the first thing I did was look for a passport America full hookup park along our route. We needed to fully flush and rinse our tanks and do some cleaning, and I found one for $20 a night in Ogden, Utah.

As soon as we started heading north we were surprised by how much snow was left on the mountains.  Lee ended up driving through the hilly areas (which had several steep grades) and I took the shift that went through Salt Lake City.  Even though we hit the city before rush hour there was still quite a bit of traffic, and the stretch between Provo and Ogden was longer than I remembered, so I was pretty tired when we pulled into the park.  Wasatch View Estates is a mobile home community that is in transition.  We have seen several of these in our travels, where as long term tenants move out, their spaces are converted to RV spaces and although that is definitely not our favorite place to stay, for an overnight it got the job done.  Lee was able to rinse our black tank several times and we luxuriated in having unlimited water and power.

The next day of travel would turn out to be a long one.  The weather forecast had changed and they were expecting rain or maybe snow at Timothy Lake later in the week and we wanted to get there before that happened.  We decided to push as far as we could with one long driving day and we took turns throughout the day and ate fast food to make our breaks shorter.  Since many campgrounds weren’t open yet in Oregon, and there were no Passport America parks along our route I was really struggling to find us a place to stop for the night.  We knew we were going to have a late check-in (around 8pm) and not all small, independent parks have a process for that, particularly out of season.  I didn’t want to run the risk of pulling into a place that late and not having a place to stay, so after doing some research I finally broke down and paid the $47 (over the phone) for a spot in a KOA. Say what you would like about KOA’s, but they do answer the phone and when you make a reservation with them, it is honored.

Towards the very end of the drive, I was taking a driving turn, and ran into a section of highway that was a 6 percent grade, with numerous curves for several miles, coming in to Pendleton.  It had been a while since I drove on such a long steepgrade, but Lee talked me through it, I went very slow with my flashers on, and it turned out to be fine.  I was still driving when we pulled into the campground, and we were both surprised by how packed it was.  Thankfully our paperwork was on the board as promised, and they had also assigned us a pull through site as we requested, so it was relatively easy pulling into our spot for the night. We did the minimal setup and then fell into bed, both glad the long day was over. 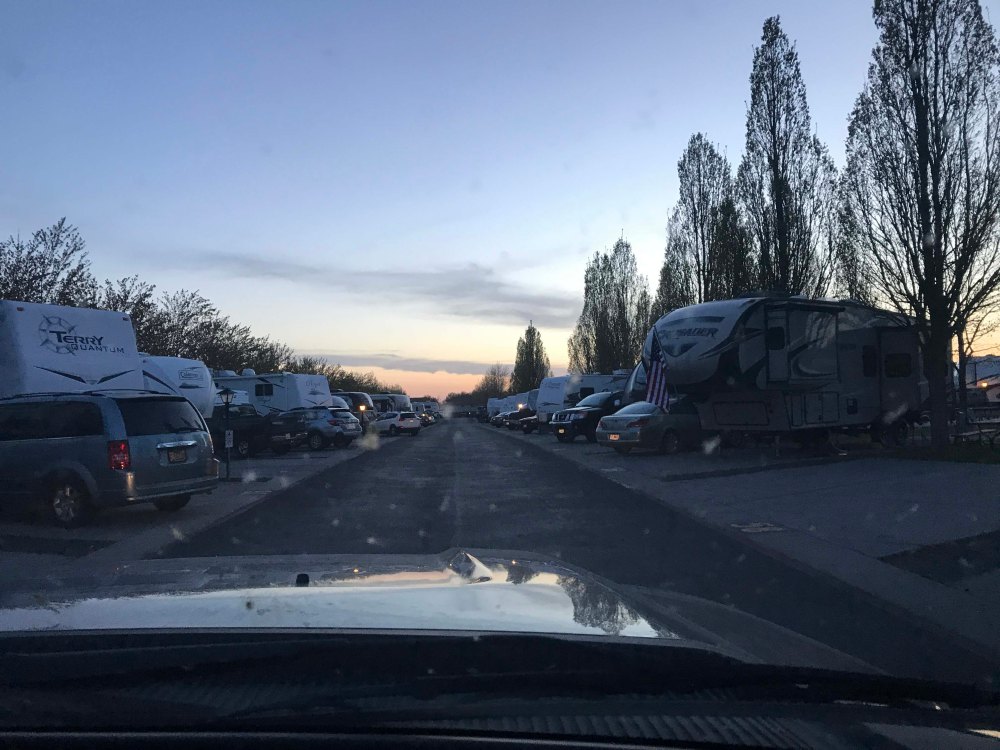 The next day our travel schedule was much lighter, which was good because we needed to stop at the main office for the company we are working for and pick up keys to the gate at the campground. There was one long-time seasonal employee up at the campground, but they wanted to make sure we had our own keys to get in just in case there was a miscommunication.  We both enjoyed the drive along the Columbia River and were pleased to see that despite the extensive fire last year, the area wasn’t gutted as I had feared.  Yes, there were definitely patches along the road where the trees were burnt, but there was still a lot of green and we both felt a little bit like we were coming home as we enjoyed the view.

Our first view of Mount Hood was very exciting 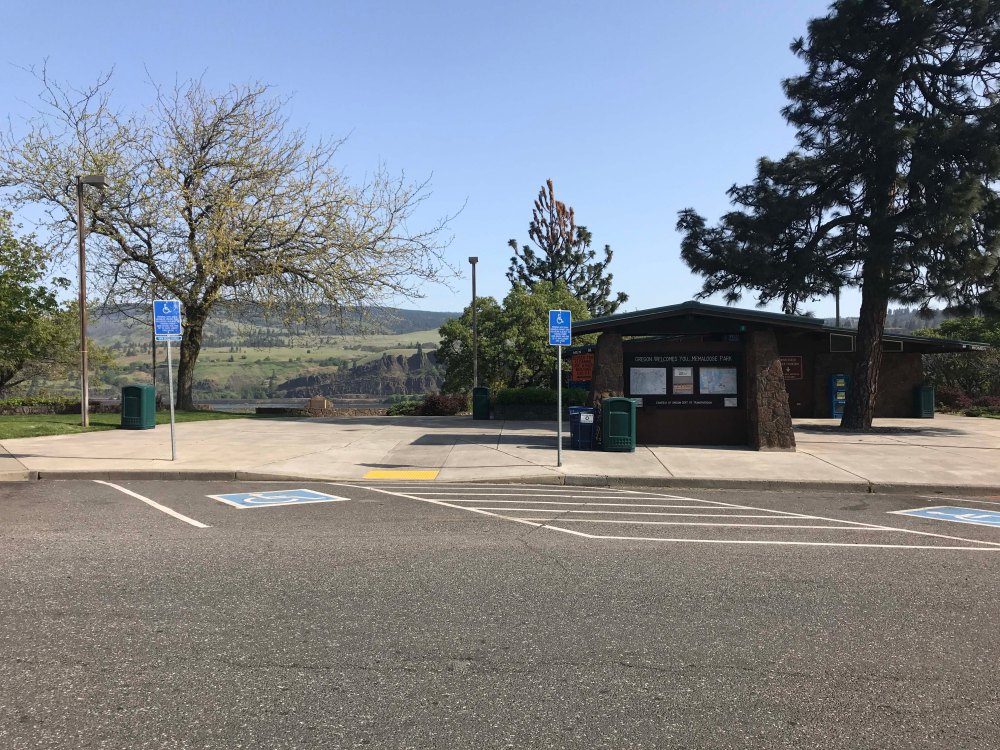 We stopped at this rest area along the way 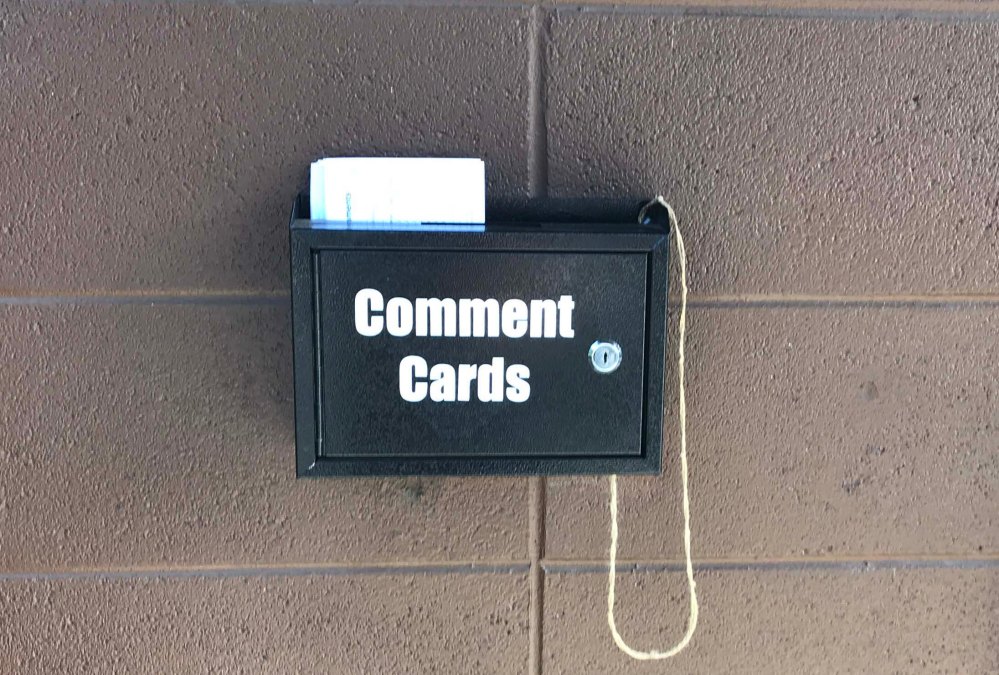 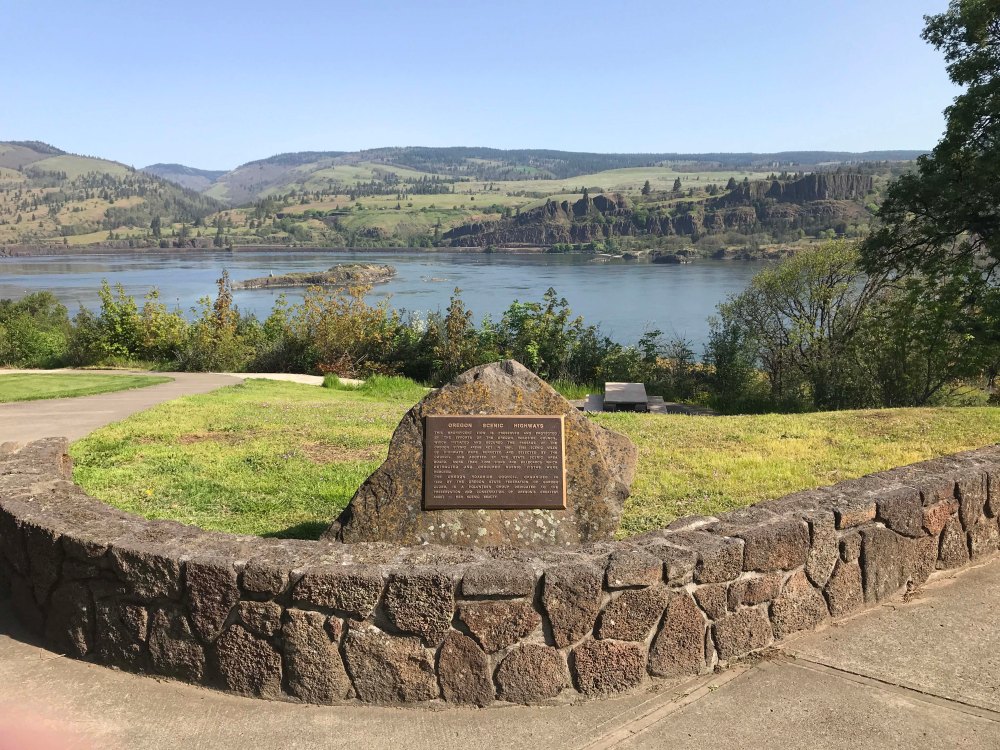 And you couldn’t beat the view 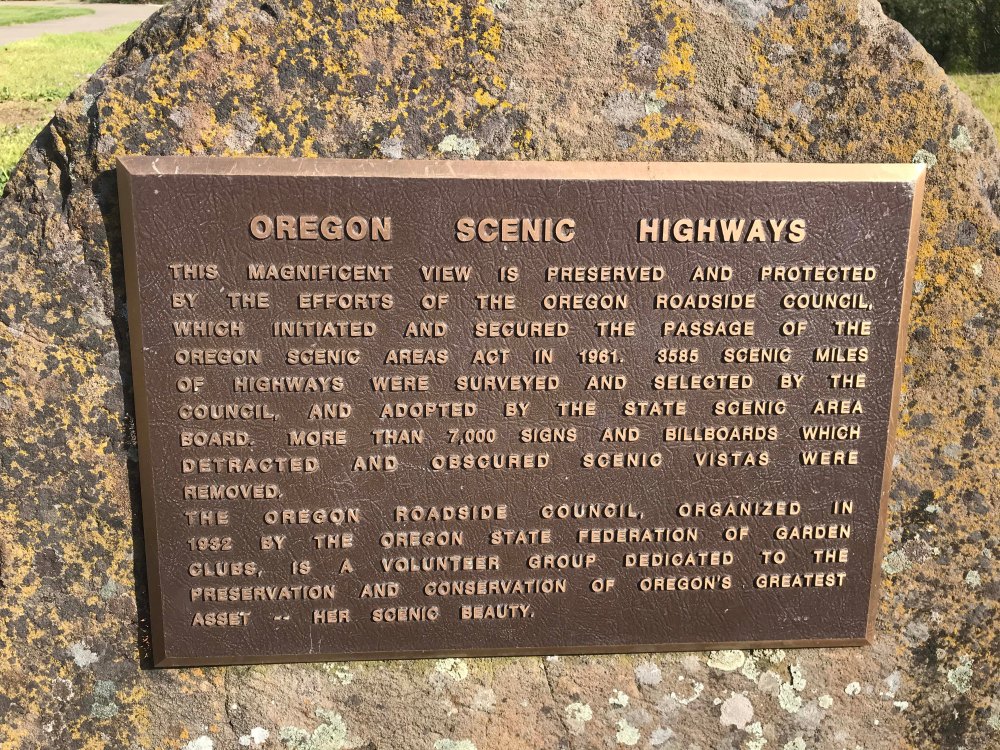 I found this interesting, that they intentionally removed signs to help with the scenic vistas

I wish I could have gotten some better pictures of the fire damage, but since we were on the wrong side of the road none of my pictures turned out very well.  I did take a moment and go online to see what had happened to the 15 year old who started the fire (he was throwing firecrackers down into the gorge) and discovered he had received 5 years probation and a mandatory 1920 hours of community service under the direction of the forest service.  That may sound extreme, but that fire burned 50,000 acres, caused home evacuations, the weeks-long shut down of a major interstate,  and ultimately cost the taxpayers $38M dollars.  As a mother I hate to see any young person suffer for a moment of recklessness with unintentional consequences, but as a nature lover I hope his sentence is a deterrent to others who are careless in the forest. In any event, we were glad that the fire fighters were able to contain the damage and are once again impressed by their dedication and expertise. Who knows, maybe that much community service with the forest service will turn into a career for him! 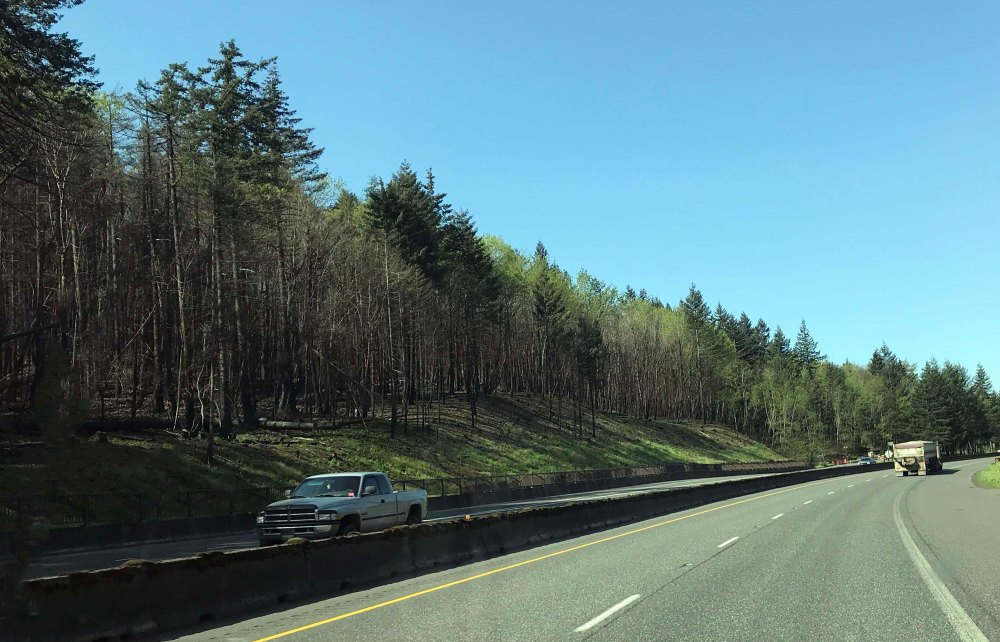 You can see a section of burnt trees on the left

It was beautiful day and we made it to the main office by noon and were greeted warmly by people we had worked with last year.  It’s always nice to come into a job and have people excited to see you, and we were definitely excited to see them.  I was eager to get settled though, so we chatted a bit and then got our keys and then went out to the RV to eat a quick lunch.  We always try to pull into a new spot on a full stomach, and after we ate we headed up towards Timothy Lake. We knew that the main, paved road to Timothy still had quite a bit of snow on it, but the “back” way was totally clear.  I was nervous about taking this route because it had 9 miles of dirt road, lots of blind, tight curves and some decent climbs. But I was assured that it had been graded and Lee felt very confident.  Ultimately the road was fine, but the steep drop-offs in several sections made me VERY nervous.  Lee told me to stop looking that way, but it was hard not to since the drop-offs were of course on my side. I think on a few sections I actually put my hand over my eyes. 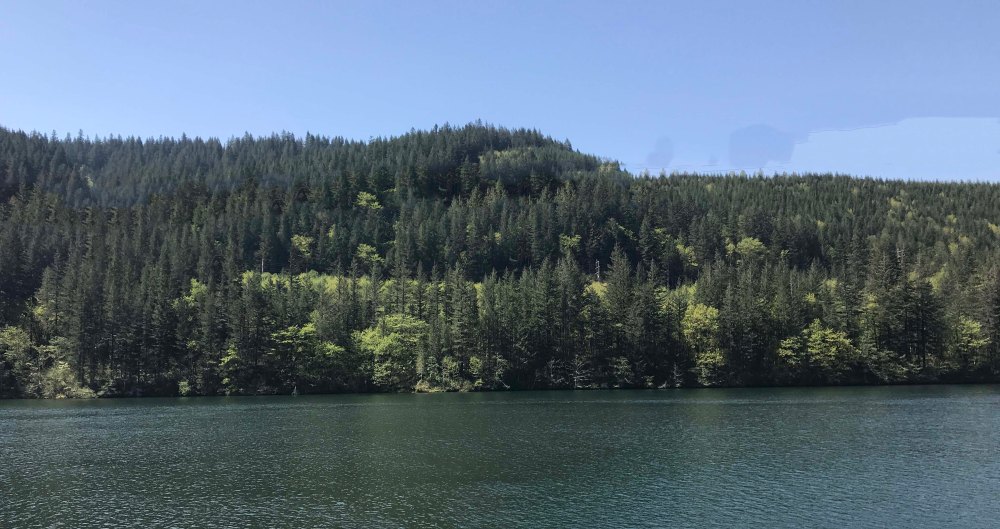 We both were excited when we saw the Clackamas River

And we passed the gate we had to get up at 5:30am all last year and said hooray we don’t have to open the gate this year 🙂 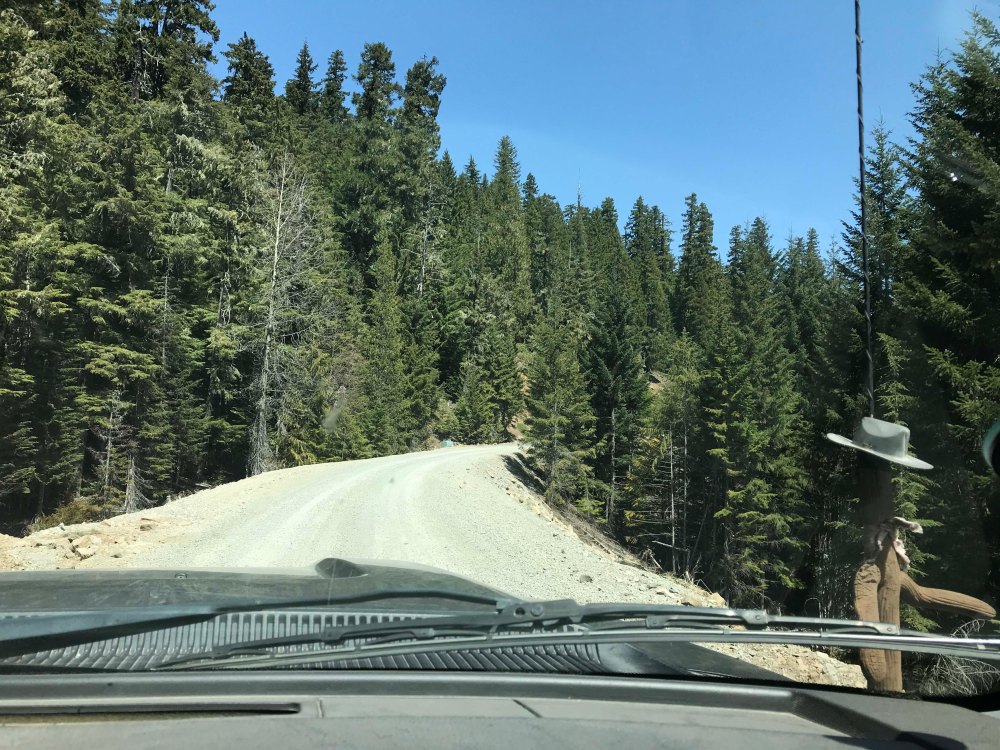 The road was in pretty good condition, but there are no guardrails and to the right that is straight down.In a lot of places it’s much narrower, and that drop off on the right has no trees, just empty space.

I was very happy when we were back on pavement and we got our first views of Timothy Lake.  I’ll do a post in the future showing you the entire area, but in advance I will share this little peek.  We unlocked the gate with no issue and were met by the employee as soon as we arrived.  He was very friendly, getting us settled into our site and then let us get setup.  We got our keys, took a little tour, and basically just took a deep breath.  It was a beautiful day (despite the snow on the ground I was wearing shorts at one point) and we were both very happy with our site.  We are excited to see what the summer brings and off to a great start. 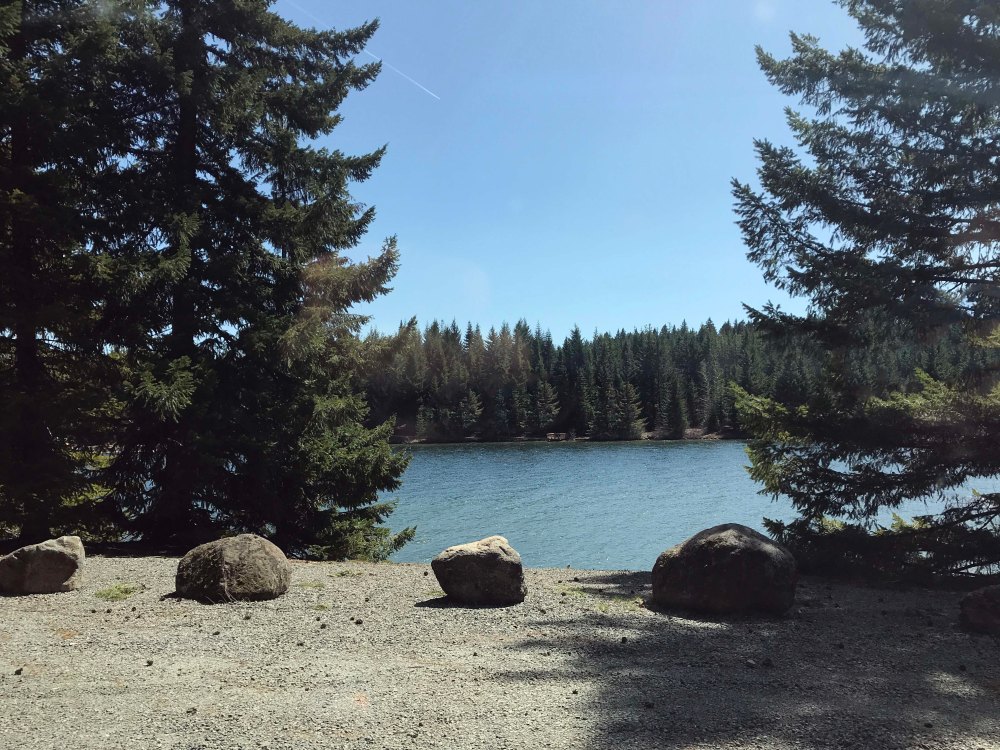 A little peek of Timothy Lake. It’s a big one, hopefully I can get Lee to take some drone photos. 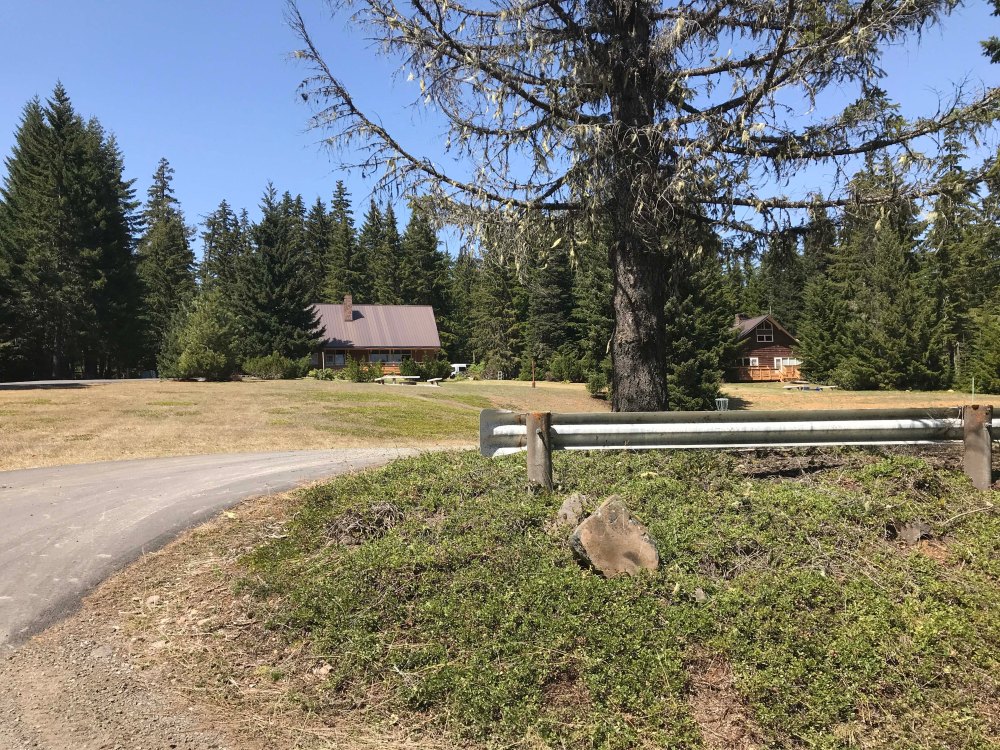 We will be staying up behind the Lodge and the office 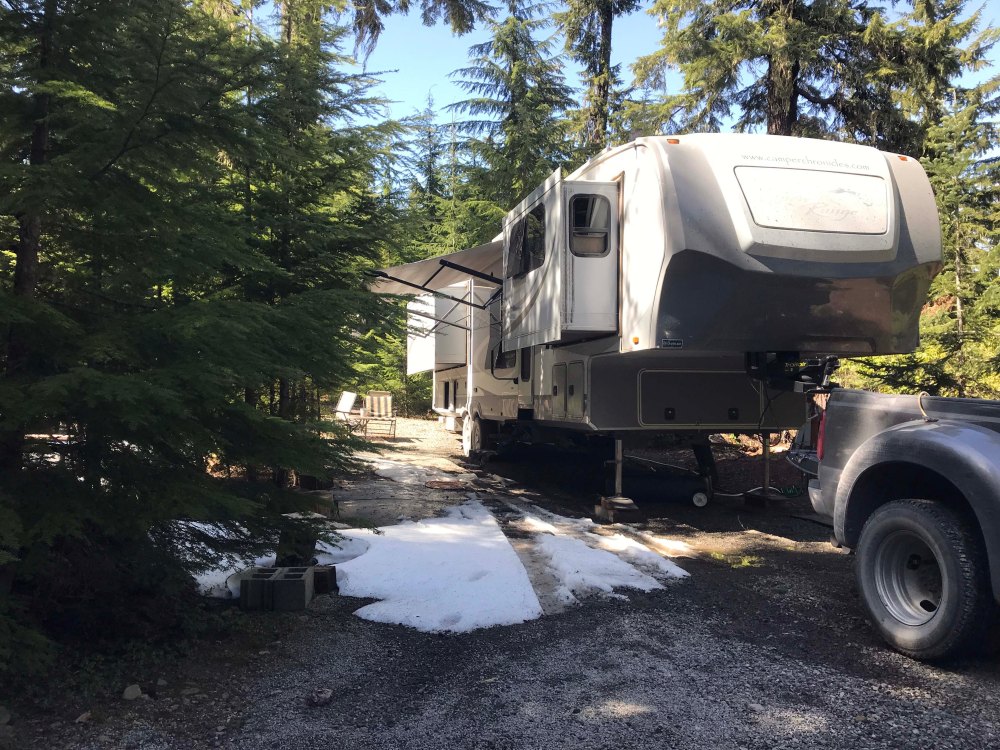 Our site!! Had a little trouble getting in initially because of some snow drifts, but we made it 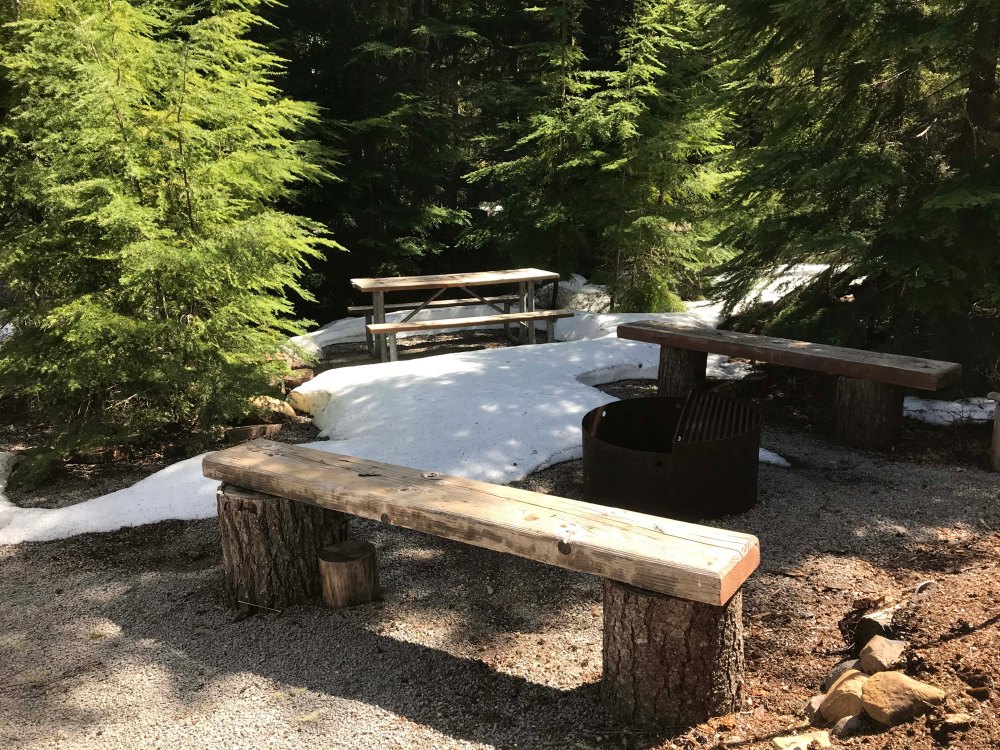 This wonderful fire pit and picnic area is for our site 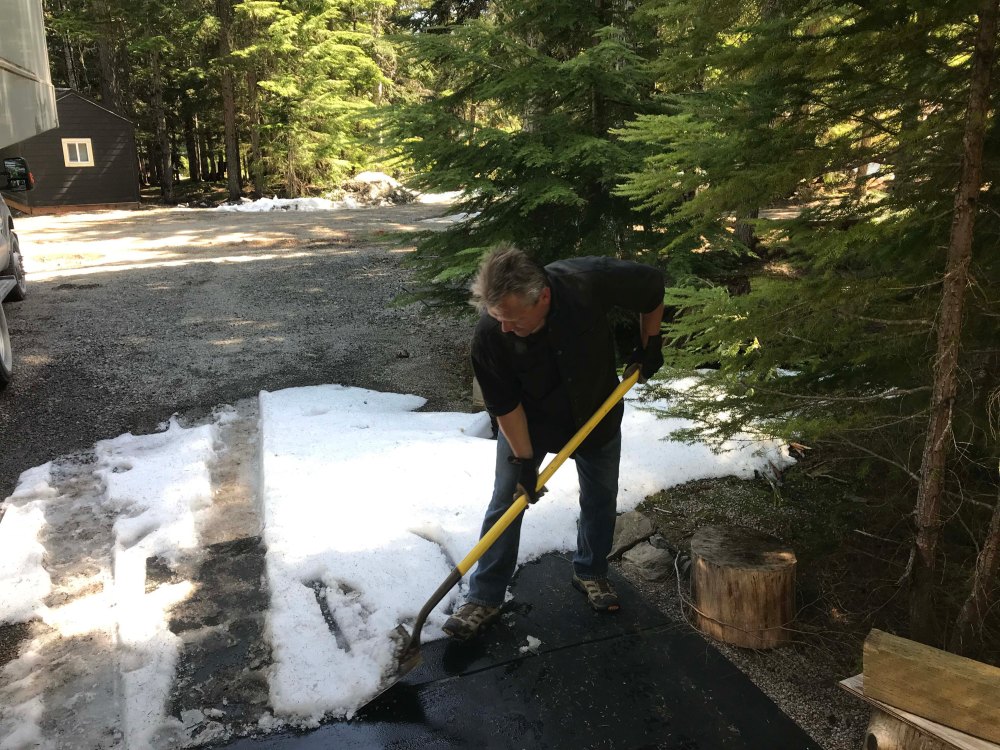 After I almost slipped, Lee did have to shovel some snow. It’s been a looong time since he has had to do that but he was a good sport about it.

4 thoughts on “Headed to Oregon”