We were told from day one that the weekend after Black Friday weekend would be our busiest by far.  It’s all hands on deck from a staffing perspective, and a completely full tent of trees in preparation.  That is one of the main reasons we have had such a sense of urgency around staffing and trees processing, because we knew the big weekend was coming.  That was a good thing.  I would always rather know and be prepared, and I have to say that the owner and his staff have kept their eye firmly on that weekend the entire time.  Despite an incredibly rocky start we actually felt ready.  Full to bursting with trees, and an adequate number of employees, and we were ready to go.  When we heard it was going to rain all weekend, I wondered what that would do to the sales, but everyone told us the rain and cold actually makes more people buy Christmas trees down here.  Weird, but since this is as close as they get to snow, I guess it makes sense.  Two of our employees have lived here their entire lives and have only seen snow once in their life.  Back in 1985 they got 14 inches of snow in San Antonio and several people talk about it when they have come into the tent.  Christmas equals snow mentally, even in Texas. so I guess overcast skies are close enough.

Thursday night was once again slow and Lee and I spent some time talking about our strategy for the weekend.  Now that the tent is full, the guys in the back can’t see when we have a customer, and I am yelling back for one of them to bring up the tree for the customer.  Obviously this is not the best approach, so we decided I would be in the booth and Lee would run the floor directing the team on which trees came first.  We had a mini-rush on which to practice and got five trees out in rapid succession with minimal fuss.  Lee and I will have walkie talkies so he can move over the floor more and I think it will work great. Speaking of walking, Lee hit a record high 19,000 steps on Thursday and he has walked over 120 miles since Nov 5th.  That is not a typo.  If nothing else, this is great for him in the workout department.  And one final thing that made me feel very hopeful.  This very nice gentleman came in and bought a 8-1/2′ Noble late in the evening and wanted it delivered that night.  That would have been a major emergency just a few days ago, but I called Jon and he was happy to do the delivery. He has a truck, lives a few miles away, and could handle the tree by himself.  He made $80 plus tip, we moved a tree quickly, and the customer was extremely happy.  It was a complete win-win-win for everyone!!  Things really are looking up.

One side of the tent to the middle. The other side was equally full

Friday started with another load of trees.  We finally received the promised Grands and some smaller  Douglas I had ordered several days ago. We waited, and we waited, and we waited.  Finally at 5pm we were told 100+ trees was coming in the load.  It finally showed up at 6:33pm.    By this time I had lots of people, but no time.  The last thing we wanted to do was process trees on our very busiest day, Saturday, but that’s exactly what we were going to have to do.  I know they had problems with the delivery and I know we were last on the list of folks who got their Grands, but honestly they could not have come at a worse time.  Well, I guess 8am on Saturday would have been worse.  Thankfully everyone was super flexible with hours. Well, almost everyone.  I asked the two guys that live far away if they could come in at 9am to help process trees before we got busy (they normally come at 11am) and initially was told yes, but then later they said they had to go to the grocery store for their elderly parents so they couldn’t be here until after 10am.   I extended everyone else for a longer day on Saturday and just hoped for the best.  Friday was pretty slow until 5pm.  It was raining pretty hard on and off and I can see why folks wouldn’t want to pick up a tree in this weather.

The good news was the evening was slow so we did get some Grands up.  Sold the first 8 footer we unwrapped less than 20 minutes after it was on the floor, so that’s auspicious.  They are a relatively cheap tree, very full, and smell slightly of oranges.  I don’t find the orange/pine smell that pleasant but some people seem to like it.  Speaking of smells, everything we own smells like Christmas tree at this point which is actually kind of nice. (When we get ready for bed at night, we shed about a thousand pine needles each, which is not so nice. – Lee)  Anyway, we are full to the rafters of Christmas trees.  We sold 19 on Saturday, much less than I expected, and we will see how Saturday goes.  I can’t imagine the rain won’t be a factor, but we will see.

After all the fuss, processing 100 plus trees to get ready, and totally blowing our labor for the week, Saturday was a bust. We sold 37 trees, which was less than last Saturday, and it was slow most of the day.  The main reason was that it poured rain most of the day.  Not just rained, but poured.  I felt super bad for the guys, because they had to tie trees on cars in the rain, but they handled it really well.  We did sell several 9-10 footers though, and had some big-ticket sales, but truly not great from a sales perspective.  The only positive thing was we have lots of trees in back stock now, so it was relatively easy compared to last week.  We knew what we were doing and so did our staff, so everyone was much more relaxed.  Since we are expecting more rain tomorrow, the whole weekend will not be what the owner expects.  The big question in my mind is when will those customers come?  Will next weekend be super busy or will we get those folks that didn’t come out over the weekend in a trickle throughout the week in the evenings?  It matters of course because of staffing.  It was all hands on deck for this weekend, but we can’t afford to staff this way every day, so will need to play it by ear. Thankfully we seem to be pretty rock solid on staffing at this point.  I have 4 solid people who have good availability and really want the hours.  I would love to have a fifth for safety, but these four should be enough to  get us through until the end.  Plus we really like them all, and enjoy hanging out with them, which is important.  There is a lot of down time on slow days and you want people who can handle the slow periods along with the mini-rushes we get.

Sunday started out OK, but then it started raining again and ultimately we only sold 34 trees, none of which were over 8-1/2 feet. We sold several of the new Grands, but it was a very slow day.  I was able to get everyone in at the same time though, and ordered pizza for the team, which was nice.  Plus Greg was there as well and the manager of the Shell station next door, so everyone got fed.  I also was plying people with hot chocolate at least once a day, which is a pretty cheap way to perk people up.  Carrying trees out to cars in the cold rain is really unpleasant, but everyone maintained a great attitude despite the weather.  Since it is only Dec 5th, I am hoping folks are just holding off and will buy a tree next week when the weather clears.  Starting Tuesday it is supposed to be 71 and sunny, and both of us are really looking forward to that.  So, it wasn’t a great weekend from a sales or weather perspective.  We still have 320 trees on the lot though, so we are staged and ready if the business ever comes.

What the back area looked like at the beginning of the weekend. Made me feel somewhat claustrophobic

At least we sold enough to clear out some of the backstock overflow. Much better!

My understanding is if our sales drop enough that it is not worth staying open, they will move the trees to another lot that is selling more, but I would think that since he wants to establish a presence in this area, he would try to keep it open.  We are more than making our payroll every day, and since our salary is fixed and the commission is the same no matter where the trees are sold, I would keep it open as long as it wasn’t bleeding money, but I am not sure what the owner’s thought process will be.  Mainly at this point I want to keep it open for the employees sake.  Since we are running a skeleton crew, they are actually making pretty good money and since they have hung in there with us, I would like to stay open for their sake if nothing else. Oh, and I had an order for an unusual flocked tree.  She wanted a light tip which “patches” of snow on the branches.  I gave it my best shot and she was super happy with it.  I don’t know if I like it that much, but she was really thrilled and that’s all that matters.  Still isn’t dry because of all the rain, but hopefully can get it to her on Tuesday. 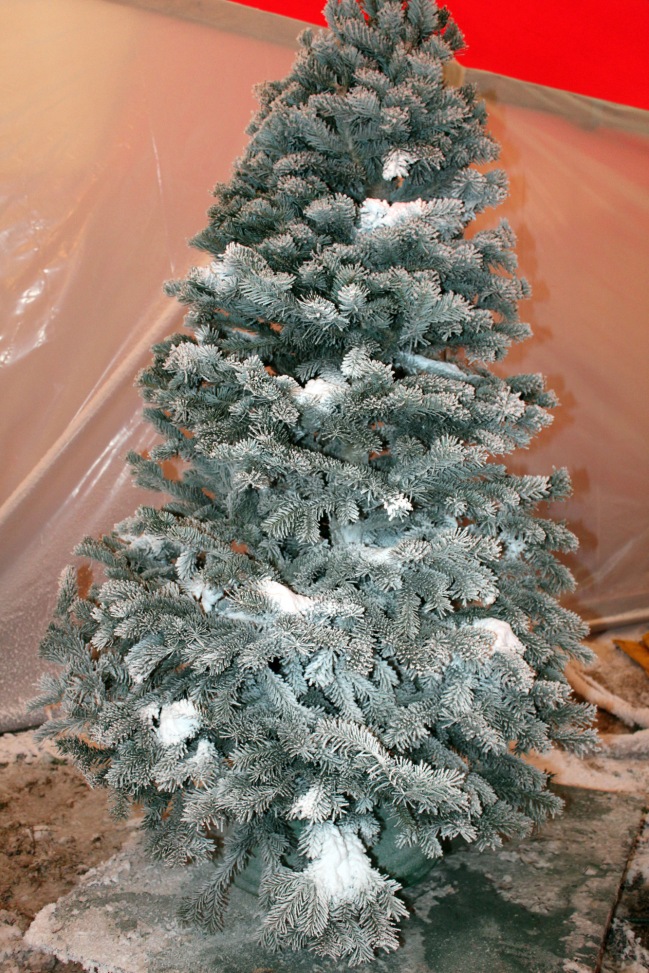 Tree with “patches of snow” 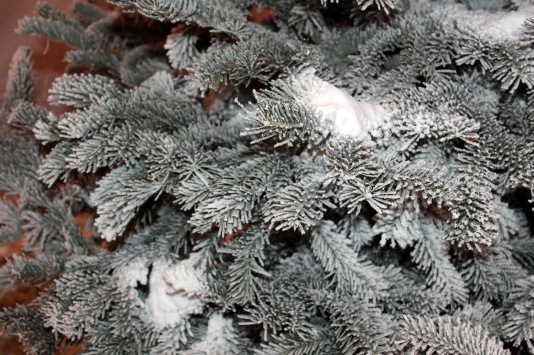