Next on our whirlwind tour of seeing people as we headed back east were my work friends Rick and Laura.  Since Rick self-admittedly only reads the beginning and end of each post and looks at the pictures (he is not alone in this tactic by any means) this is a special post just for him.

There you go Rick, now you can just look at the pictures. Sorry, I couldn’t resist!

For everyone else (Laura included) here’s the rest of the story.  Many years ago Rick and I worked on a major Oracle software implementation.  For five years we worked night and weekends and traveled frequently and probably spent more time together than we did with our families.  Luckily we really liked each other.  We were both transplants to the New England area (Rick from Texas and me from Ohio) and really bonded about our cultural similarities in comparison to the Northeast.  Plus we were both totally devoted to our respective families and he made work traveling fun and relatively easy because he is a true southern gentleman.  Arguably he knew me better during that time period than any non-related person and to be honest I was a little worried about what he would think about all of this RV “craziness”.  I feel different than I was in my previous life and since we no longer have the work thing in common would we still be close to one another.  Turns out I worry too much…big shock there right?  When people really care about you, that stays regardless of whatever changes you make in your life and our conversation was easy and extremely comfortable, but let me back up a bit.

We had heard about a free city campsite, Spring Creek Park in Tomball, TX from both Cori and Laura and decided to try it out.  There are 8 sites in a row in a nice city park with beautiful brand new full hookups.  Unfortunately somehow we missed the fact that you would need reservations, despite the fact that it is free, and when we found out (after we set up in an open spot for the night) it was a bit stressful.  We got extremely lucky for Wednesday night and were able to stay, but it was booked on Thursday so we had to move on.  We ended up at Corral RV Park, which was well cared for and had extremely large full hookup sites, but was $40 a night.  Yikes.  Well, as my grandma used to say, beggars can’t be choosers, and I felt a little better about it since the night prior was free.  First time we have ever made that particular mistake though.

The view behind us at Spring Creek Park 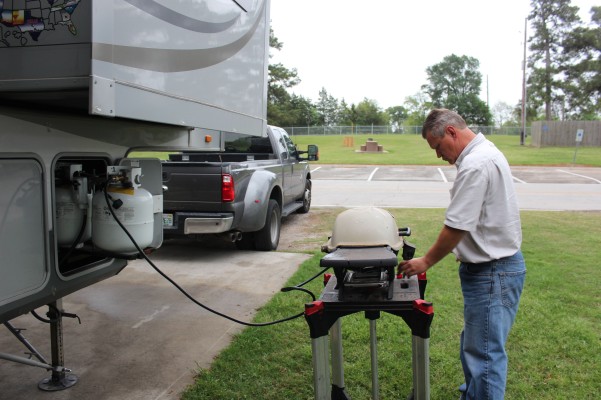 Lee finally figured out how to hookup our grill up to our rig propane so no more little bottles…hooray!

After we moved and set up again on Thursday, then we went to Costco.  Lee and I decided we were going to try a Costco membership and there was one close by.  We didn’t live near any big box stores in New England so this was new to us, but after checking it out with Cori and Greg I feel pretty confident it will be cost-effective, but only under certain conditions. We bought the Premier membership for $110 which gives 2% cash back at the end of the year.  When you get the check at the end of the year if it doesn’t cover the additional $55 over the basic membership price Costco will refund the difference.  We chose Costco because of the deals they have on car rentals, insurance, etc, and mainly because the queen of the internet Cori compared Sam’s Club to Costco and thought Costco was a better deal.  We decided to get the membership mainly because of their deals on meat.  I can get great deals on dry goods and we travel and we prefer fresh produce from local farms when available but meat continues to be a challenge.  Since we have limited freezer space we can’t stock up on the good deals, so we are often at the mercy of whatever is on sale that week.  Costco has high quality meat on sale pretty much continuously and we ended up buying Ribeye, chicken thighs, and hamburger for great prices.  They also have some wonderful deals on great quality frozen fish (another hit and miss item at local grocery stores) and I got a packet of Atlantic Cod.  Everything else though you really need to watch the prices and quantities.  Will you eat it all before it goes bad and do you have room to store it are big questions when shopping at a box store, so we were super selective in what we bought.  Still we ended up spending $200, but I have a full freezer and we will see how the economy of the whole thing plays out over the next year.

As a side note I kind of get why Rick would skip the section above.  Laura said they would “kill each other” if they lived in that small of a space together so it’s not really relevant to him.   He has a huge pantry and can Costco it up to his heart’s content!  Still a little pantry jealous obviously.

After Costco we chilled for a bit and then went to see Rick and Laura’s house.  Eight years ago Tomball was a rural suburb but as Houston has grown so have they.  It’s a great house though with a huge kitchen and as we got the tour I had serious pantry envy!! We sat and talked for 2 hours and time just flew by and then we all jumped into Laura’s car to go to their favorite Chinese buffet.  Getting good Chinese food on the road has been a real problem and it was great to have their recommendation to go by, plus Rick generously bought us dinner, which was really nice. The China Bear was huge, seriously, the largest building holding a Chinese buffet I have ever seen, and had lots of regional specialties on it, including crawfish. The food was good, company was even better, and the price was definitely right! 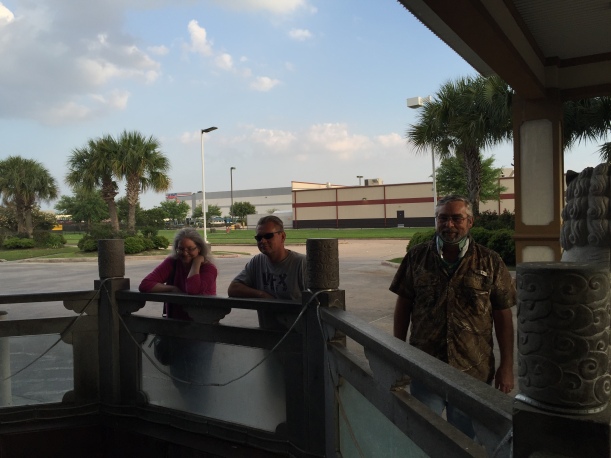 Laura, Lee, and Rick who is recovering from neck surgery …hence the brace

Afterwards we went back to Rick and Laura’s and saw their son Jeff.  Now 27, Jeff works in IT for a local college and is all grown up.  It’s been 8 years since I have seen him and what a nice young man he has grown into.  Plus, when he said he read my blog, well I was super excited.  The fact that a millennial (who is not one of my kids) finds my blog interesting was a huge ego boost.  We chatted some more and caught up on his life and then left around 8:30 to get ready for an early departure the next morning.  Since Texas is one of the few states where we can spend the winters we know we will definitely see them again and it really was wonderful to renew the connection.  Since this is in the middle and I know he’s not reading it, I can say I absolutely love Rick and adore Laura.  They are wonderful people and getting to see them is another one of those great benefits that goes along with the travel lifestyle.

me and Jeff..whose all grown up!!

We had a 7 hour travel day scheduled (which is our outer limit) in order to make it to Pat and Bridget’s house in one day and knew we would have to deal with Houston traffic on top of that. Luckily Tomball is on the northern edge and there is an outer outer belt you can take that is so new it doesn’t even show up on Google maps.  Unfortunately it is a toll road and only accessible if you have a TX pass, which of course we didn’t have.  We weren’t sure what route the GPS would take us, so when we woke up at 4:30am to heavy rain we decided to get an early start.  We got out by 6:30, which is highly unusual for us, but I am glad we did.  Traffic was slow even at that hour and suddenly we found ourselves GPS directed to the toll road.  We use an RV specific GPS and almost always use it because of height and weight restrictions so despite the signs saying violators will be prosecuted we decided to risk it and take the toll road.  The traffic was MUCH lighter on that road and we were making good time when the one policeman we saw pulled out behind us.  He followed for a while and we were sure we would be pulled over, but apparently decided to give us a break and didn’t.

Here’s my opinion on the whole thing.  We were guests in the state, pulling this monster rig, and we followed our GPS.  If you are going to have a major toll road then have a way for people from out-of-town to pay.  It’s not like we were trying to break the law, we just really didn’t know what our alternative was. Plus it’s a great section of road and probably saved us an hour on the way out of Houston so everyone should have access to it.  If they send us a bill for the $5 in the mail, we will definitely pay it or maybe they will just let it go.  We will see.  Once around the outer belt we hit a wall of traffic on I-10.  It eventually cleared up about 10 minutes outside of town but it took us about 30 minutes to go 5 miles.  And this was at 7:30 am so I really do recommend an early or late start when going through Houston.

We took I-10 through Texas, which was not the nightmare I had heard.  Yes it’s rough in some spots and there is traffic, but it wasn’t awful by any means.  I drove most of it and appreciated how flat it was actually. When we hit Louisiana we switched because this was my very first time in Louisiana!!  My first impressions were it was very pretty.  Super green, lots of water in the rivers and creeks, and comparatively very little trash.  Eventually we turned on 90 and hit big swamp sections and it was even cooler.  The highways are raised in many sections because you can’t build in swamps and we were surrounded by cool old trees and moss.  I saw numerous egrets and other birds along the drive and I was fascinated.  90 though is a really rough road comparatively and we were seriously getting bounced around.  Bridget had warned us though so we just took our time and tried to have a good attitude about it.  I thought of it as a training course for our trip to Alaska!! Every truck stop along that road has an attached casino and they are relatively small, but we did find a place to stop and eat.  It was real Louisiana countryside and I enjoyed it…bouncing aside.

My very first view of Louisiana swamp was really pretty

So next up is our very first experience at “mooch docking”, which is staying at a friend’s house and our wonderful visit with Bridget and Pat.  I swear I am trying to get caught up here, but there is so much going on!!  Thanks again Rick and Laura for your hospitality and can’t wait to see you guys again!!