The same day we made it to Florida I received a phone call that my grandmother had passed away.  She had a relatively minor procedure to unclog an artery (the first time she had been in the hospital since her youngest son was born) and she was back home recovering when she unexpectedly passed.  She just fell asleep in her chair with her husband and her son close by…and was gone.  That was my grandmother in a nutshell: no fuss.  Everything she did she did with no fuss, and she died the same way.  It was very unexpected though (she was only 83 and in fair health) so I was glad I was only 3 hours away and could get there quickly to be with my grandfather and aunts and uncles as they made arrangements to transport her back to Ohio, where she was from, for the funeral.  Since she is a huge part of the reason I am living on the road, I thought I would write a little about her life.  I admired her tremendously and maybe writing will help deal with the sadness some.

Grandma Pat was born in Akron, Ohio but lived in Newport, RI after her parents divorced.  I lived and worked near Newport and had the opportunity to visit one of the cottages where she spent time as a child.  I don’t know much about her early years, but they were tough, and she left high school in the 11th grade to marry my grandfather.  She had my mother at 15 and went on to have 3 more children with him.  So you would think she had everything against her…kids at a young age, no high school education, but not my grandmother.  She was tough.

Grandpa became a very successful brick layer and they flipped houses back before flipping houses was even a thing.  They would buy a house, and he would fix up the structure, and she was a brilliant and creative interior designer and would completely redo the inside. Then they would sell it for more money than they bought it for, and move on.  I don’t know how many houses they bought and sold over the years but she had a knack for picking a property that would increase in value, and the talent to show it to its best advantage.  They had a place in Florida for many years right on the beach at Singer Island and we spent quite a few summers with them when I was a kid.  I have to say it spoiled me quite a bit because I grew up walking the beach a few yards from where we were staying and few vacations I have ever taken since then have compared to those childhood experiences.

She also owned her own beauty salon when I was small.  She taught herself to do hair, had a salon in one of her homes, and then bought her own little place in downtown Grove City, Ohio called Patrice Salon.  She was very very good with hair and most of my early haircuts came from her.  The other really impressive thing she did was teach herself the stock market.  She was a whiz at math and through research she learned how the market worked.  For years she managed their investments and did very well for them until the dot-com burst in the 90’s when they (along with most people people) lost quite a bit.  She was never bitter though.  She looked me right in the eye and told me the stock market was no different than gambling, and to never let anyone tell me different.  That was my grandma.  She didn’t give much advice, but when she did it mattered, and I learned to pay attention.

She was the most proper person I have ever met in my life.  Not prim or prissy, just proper.  Mom told me this week that GranmaPat bought a book of manners and used that book to live her life.  I never saw her rumpled or messy, she was always neat and orderly.  She was very reserved, but I never found her unapproachable.  My cousin Troy and I spent the most time with her as the oldest grandchildren and she was very good to us, but no-nonsense.  I really think my brutal practicality comes from her…along with my hair.  (Mom used to despair when I was a kid that I got my grandma’s hair because it never did what it was supposed to.)  That practicality was balanced with amazing creativity though.  Later in life, she taught herself to paint watching the guy from PBS and she worked at it until she got pretty good. Her initials are P.A.P and she called those paintings her PAP smears…which was funny because it was the closest to inappropriate I ever saw my grandmother get. 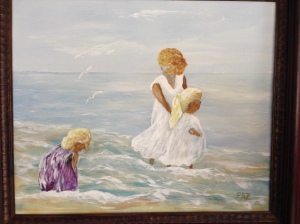 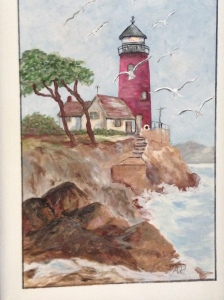 When Grandpa was 55 he hurt his back and had enough years in the brick layers union to retire.  At some point they decided to see the country, and they bought a Class A motor coach and started traveling. Again, they were ahead of their time.  I didn’t even know that was something people did, but it made a huge impression on me and I always thought one day I would want to do the same thing.  They traveled all over the US and Canada in a Class A and then a Class C.  A year ago when Lee and I were thinking about starting to full time, I called Grandma and asked her what she thought, and she said she had a wonderful time those three years.  She met so many great people and they saw so many wonderful things.  I asked her why she stopped, and she paused and said, “Because we saw everything we wanted to see, Tracy.”  As if it were obvious, which I supposed it was.  That was my grandmother; she didn’t suffer fools.  She loved deeply though, I always knew she loved me, she just had a tough time showing it.  It never bothered me though because I always knew.  I also have to say she is the only person I know who could stop my mother in her tracks with a look or a word.  My mom is a very strong person, but grandma, in her quiet way, trumped her.  Mothers and daughters..every woman on the planet understands.

So I will miss her very much, but I carry in me many things I learned from her: my tendency to be still in conflict, my need for some order in chaos, my “properness”.  My sister Wendy seems to have inherited most of her creativity, but I hope to discover I have some of that in me waiting to blossom.  Mostly though, my desire to create my own path I truly believe comes from her and her example.  It is at war with the desire for conformity in me, but I think in the end that quiet independent spirit will win out.  I often think of her and all the things she accomplished with every disadvantage in her life and have no patience for any excuses on my own part since I had so many more advantages starting out.  I love her and I admire her, and I wish I could have told her that one last time.  But I also know she would have no patience with me dwelling on it.

So I will Grandma, and thank you. 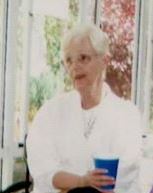 6 thoughts on “For my Grandmother”